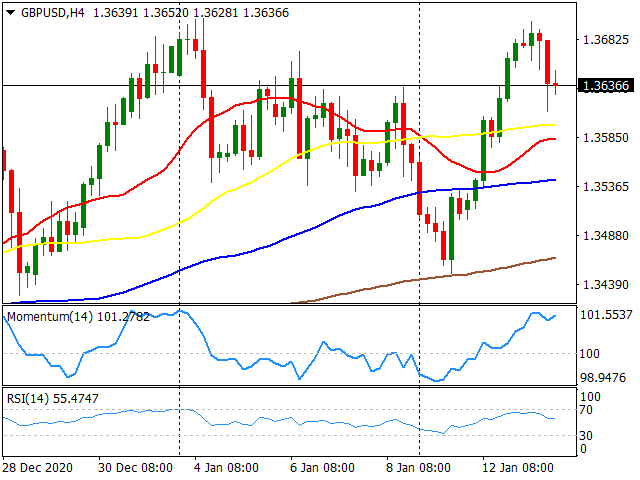 The GBP/USD pulled back after reaching one-week highs and testing the January peak. The rally that followed Bank of England governor Andrew Bailey comments that sounded cautions regarding negative interest rates, ended after the pound hit 1.3700. Also, optimism about the vaccine rollout added strength to the pound. Finally, during the American session, it pulled back versus the dollar and against the euro after EUR/GBP approached the 0.8860 level, a critical support.

The dollar strengthened across the board during the American session and erased losses, favoring the correction lower on GBP/USD. Economic data from the US showed no surprises with inflation under control, and economic activity modestly increasing according to the Beige Book. Jobless Claims data is due on Thursday, although the key event will be US President-elect Biden’s speech. In the UK, the spread of coronavirus remains a concern. UK Prime Minister Boris Johnson suggested it could add more restrictions if necessary.

The GBP/USD pair trades near the 1.3650 zone, about to end the day with losses after testing the multi-year high. The correction has been limited, and the bullish momentum still prevails. However, as long as it remains under the 1.3700 barrier, the upside seems limited and vulnerable to corrections. Ahead of the Asian session, GBP/USD is moving to the downside, but still above the key SMAs in the 4-hour charts. A consolidation below 1.3585, would weaken pound's outlook, exposing the next obstacle at the 1.3535 area.