The GBP/USD pair closed the fourth straight trading day in the positive territory on Monday and has managed to preserve its bullish momentum during the European trading hours on Tuesday.

As investors remain focused on the Bank of England's (BoE) policy outlook in the absence of Brexit-related developments, the British pound continues to outperform its rivals. At the time of press, GBP/USD was trading at its highest level in a month a tad below 1.3800.

Over the weekend, BoE Governor Andrew Bailey argued that they will have to act to contain inflation and inflation expectations.

Reflecting the impact of this comment on rate hike expectations, the 2-year UK gilt yield gained more than 20% on a daily basis. Furthermore, the CME Group's BoEWatch Tool now shows that markets are pricing in a 52.2% probability of a 25 basis points rate hike by the end of the year and a 17.9% chance of a 50 basis points hike. The odds of the BoE leaving the target rate unchanged is currently 29.9%. 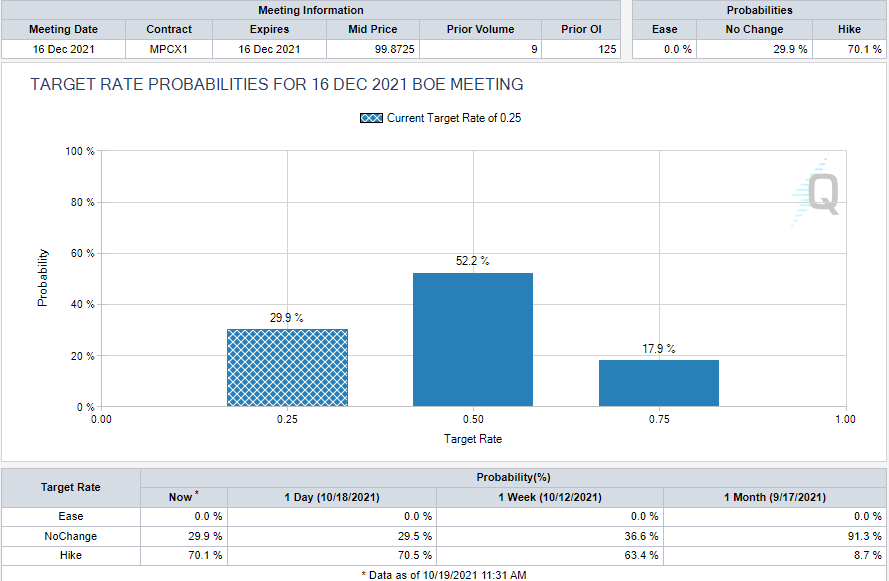 Meanwhile, the broad-based selling pressure surrounding the greenback is providing an additional boost to GBP/USD on Tuesday. The US Dollar Index is currently trading at multi-week lows near 93.60 pressured by a 1% decline in the benchmark 10-year US Treasury bond yield.

US stock index futures are up between 0.2% and 0.3%, suggesting that the dollar could have a difficult time attracting investors if risk flows continue to dominate the financial markets in the second half of the day.

Later in the session, September Building Permits and Housing Starts data will be featured in the US economic docket but investors are likely to pay little to no attention to these readings.

GBP/USD continues to trade within the ascending regression channel coming from late September. Currently, the pair is testing the upper limit of this channel and the Relative Strength Index (RSI) indicator on the four-hour chart is staying near 70, suggesting that a technical correction could be seen before additional gains.

The last time the RSI rose above 70 on October 15, GBP/USD corrected toward the middle line of the ascending channel. At the moment, this line is located at 1.3760, forming the initial support there before 1.3730 (20-period SMA, lower line of the channel) and 1.3700 (psychological level, 200-period SMA).

EUR/USD eases below 1.0450 as USD firms up amid light trading

GBP/USD licks its wounds around 1.2100, as investors stalk the US dollar amid growing growth fears. Another attempt to oust UK PNM Johnson and looming Brexit woes keep the upside elusive in cable. Thinner liquidity conditions will prevail amid the US holiday.

Gold Price defends minor recovery gains above $1,800 amid US holiday. Growth fears strengthen the US dollar, despite the recent sell-off in yields. XAUUSD awaits death cross confirmation to resume the downtrend below $1,800.