The GBP/USD pair gained some strong positive traction on Friday and moved back above the 1.3600 mark, albeit failed ahead of multi-year tops touched earlier this December. The British pound saw a "sell the fact" reaction to the announcement that the United Kingdom reached a last-minute Brexit deal with the European Union. Given that the outcome was largely priced in the market, the lack of surprise did little to provide any meaningful impetus amid relatively thin liquidity conditions on Christmas Eve.

Both the UK and the EU will now have to ratify the deal. British Prime Minister Boris Johnson said that the UK Parliament will vote on the trade deal by December 30, a day before the end of the Brexit transition period. The European Parliament, however, has declined to vote on the accord this year due to the lack of time for scrutiny. The European Commission, instead, has proposed to provisionally apply the deal until February 28, 2021, as the EU nation members are scheduled to meet in January.

Nevertheless, the pair settled around 80 pips off daily swing highs, though the prevalent US dollar selling bias assisted the pair to regain some positive traction for the third consecutive session on Monday. Apart from the latest Brexit optimism, news that the US President Trump has signed a $2.3 trillion COVID-19 relief and government funding bill boosted investors' confidence. This, in turn, was seen as a key factor that continued undermining the greenback's relative safe-haven demand.

The pair held steady above mid-1.3500s during the Asian session and is unlikely to make any big moves in either direction amid holiday-thinned trading. The UK banks will be closed in observance of Boxing Day. That said, developments surrounding coronavirus saga might infuse some volatility and assist traders to grab some short-term opportunities.

From a technical perspective, bulls might now wait for a sustained move beyond the recent swing highs, around the 1.3620-25 region, before positioning for an extension of the recent upward trajectory. The momentum might then push the pair further towards the 1.3700 round-figure mark for the first time since May 2018. Any subsequent move up is more likely to confront a stiff resistance and pause near the 1.3740 horizontal resistance.

On the flip side, the key 1.3500 psychological mark might now protect the immediate downside and is closely followed by the 1.3480-75 horizontal support. Dips below the mentioned support levels might now be seen as a buying opportunity and remain limited near the 1.3435 region. However, some follow-through selling might prompt some long-unwinding and turn the pair vulnerable to slide back below the 1.3400 round-figure mark. 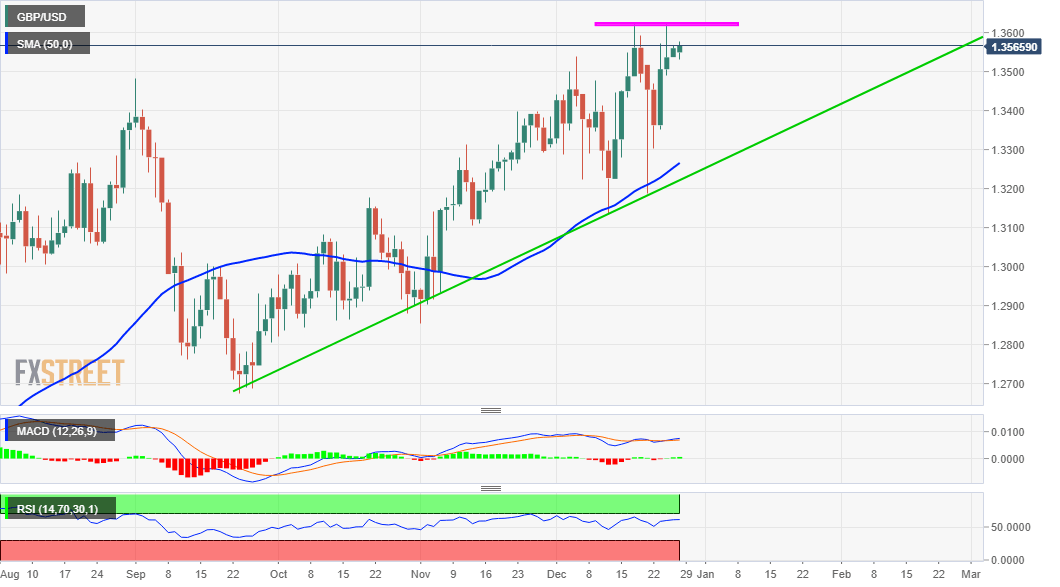 EUR/USD clings to modest daily gains above 1.0350 during the European trading hours. Eurostat reported that annual Core HICP remained steady at 5% in the Eurozone in November as expected. Investors await key data releases from the US and Powell's speech.

ADP's jobs report has finally come in line with the official NFP report. It took a hiatus and a change in formula to make that happen, but what matters is that this release finally matters.