After the low-liquidity "summer doldrums" of July and August, it felt like FX traders would do anything for some volatility in the market. Perhaps they should have been careful what they wished for.

At 23:07 GMT (7:07 PM ET) yesterday, the GBP/USD started falling from its established level around 1.2600. The selling snowballed a couple of seconds later on the break of the 1.2500 level as the pair hit an air pocket in the low liquidity post-North-American, pre-Asian session "twilight zone." By the time the selling avalanche subsided at 23:09 GMT, the world's fourth most-traded currency had fallen a staggering 800 pips, or over 6%, in just two fateful minutes. 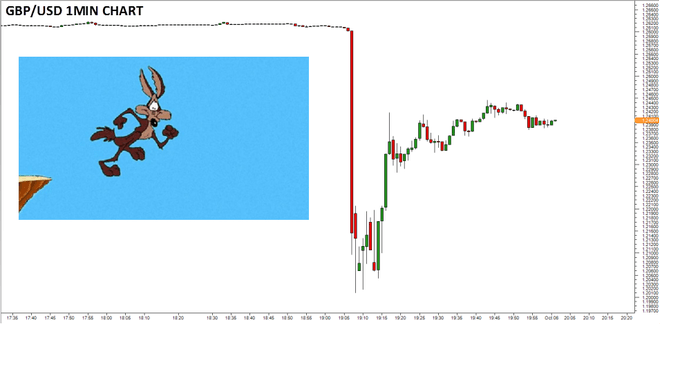 As of writing on Friday morning the pound has recovered somewhat, but not completely. GBP/USD is still holding below 1.2400, suggesting that the overnight collapse wasn't entirely due to a temporary market anomaly; in other words, the pound still faces serious headwinds and may still fall further in the days to  come.

Our innate desire to understand forces us to ask the question, but we want to note at the outset that pinpointing a single "cause" for the pound's "flash crash" is a fool's errand.

It's not a coincidence that we used words like "snowball" and "avalanche" when describing the price action. Just like in a physical avalanche, a tiny snowflake can lead to a massive cascading reaction that dwarfs the initial "catalyst" if the conditions are right. When it comes to the pound's avalanche of sell orders, the conditions were ripe for a massive washout:

1) Sentiment toward the pound was extremely dour

Like a court defendant out on bail, the last couple of months represented a momentary pause in the UK's Brexit fears. That honeymoon period ended abruptly this week, with comments from UK PM Theresa May suggesting that the country was heading toward a "hard" Brexit, with negotiations to start within the next six months. This painful reminder of the upcoming period of economic and political uncertainty made traders highly wary of holding long-GBP positions.

"Low liquidity" is a relative term in the $5+ trillion / day FX market, but if we were ever going to see a "flash crash" in a major currency, it would be much more likely in the quietest time of the day. The pound's collapse took place after US traders had gone home for the day and before most Asian traders got to their desks. In addition, the upcoming US Non-Farm Payrolls report likely meant more money was on the sidelines than usual.

Like it or not, an increasing portion of the volume in all markets is being driven by computers. Dating back at least to the "Black Monday" stock market crash of 1987, programs that automatically sell in falling markets have been exacerbating sharp moves in the market.

With these three pre-conditions in place, all it took was a spark to light the gunpowder keg. That "spark" came from Financial Times:

Rather than the amiable tone that "Brexiteers" had been hoping for, it sounds like the EU will be playing hardball at the upcoming Brexit negotiations. In an article in the Financial Times, French PM François Hollande stated that "Britain must suffer the consequences of leaving the EU in order to save the institution from an existential crisis" and that "There must be a threat, there must be a risk, there must be a price. Otherwise we will be in a negotiation that cannot end well."

Under "normal" market conditions, the market likely would have digested these comments in stride, with limited impact on the pound. But given the extreme fragility of the pound's situation, Hollande's comments were the proverbial snowflake that cause the avalanche of selling pressure.

Moving forward, the lessons to take from last night's "pounding" are clear: