EURUSD has rallied by just over 50 pips from the intraday low in posting a high at 1.1882. This swings yesterday’s six-day peak at 1.1901 back into scope. 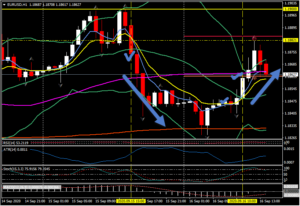 Regarding the FOMC, no changes are expected in policy, and while the central bank will likely present upward revisions to US economic projections, the recently codified lower-for-longer monetary policy regime is driving a bearish dollar sentiment. The Dollar is also correlating inversely with global stock markets. These factors appear to be outweighing recent ECB signalling about its concerns about euro strength, which partly counterbalances the easing measures implemented earlier in the year. The Pound has rallied to six-day highs against both the Dollar and Euro.

Cable‘s high is 1.2976. The gains in the UK currency have been concurrent with market narratives showing a measure of incredulity about the UK government’s insistence that it is serious about its threat to leave the EU’s single market at year-end without a new trade deal, given the massive near-term disruptive impact it would have on the economy and the divisions appearing within the Conservative Party and among UK nations. Even though the controversial Internal Market Bill sailed through the House of Commons, the proposed legislation is likely to have a tougher time in the House of Lords, and in any case there are suspicions that the legislation is merely a gambit of PM Johnson and his cabinet to up the ante and strengthen their negotiating position into the final weeks of talks. This fits with expectations that a more practical attitude will be seen in trade negotiations once state leaders become directly involved in the run-in to the October 15th-16th EU summit. This backdrop has lessened the bearish conviction markets have with regard to the Pound.