Risk-on positioning has continued to be expressed in currencies, which has seen the Yen edge out fresh lows and the Dollar bloc and most developing-world currencies rise (even the Turkish lira has come off the lows over the last day). USDJPY pivots at 108.00 with support at 107.75 and 107.45 with initial resistance at 108.30.

Markets are hopeful that the US and China will reach a partial trade agreement. Trump said the first day of the 13th round of trade talks were “very, very good,” while a White House official cited by Reuters said the talks were “probably better than expected” and a US Chamber of Commerce official said that the two sides were on track to make a currency agreement as soon as today (Friday). The S&P 500 closed with a 0.6% gain yesterday, and futures of the index are showing a 0.3% gain in the overnight and European sessions. This has put the bellwether index back to within about 2.5% of its record level.

In the mix is an unexpectedly positive Brexit vibe. The meeting between UK PM Johnson and Irish PM Varadkar produced a statement saying that they agreed they “could see a pathway to a possible deal” with regard to the problematic issue of making Brexit work while preserving the Good Friday Agreement. What was of particular note was the tone from Varadkar, who — having hitherto been consistently critical of proposals for “alternative arrangements” for the Irish border backstop — said that he is “now absolutely convinced” that Johnson wants a Brexit deal. The pound rallied by over 1.5% on this, the currency’s biggest single day rise since mid-March (when there was news of the first Brexit deadline being delayed). The UK and EU will continue negotiations today and into next week’s EU summit. Cable has spiked as high as 1.2500 today on expectations of more positive news flow. The UK’s Parliament will be sitting on October 19 (a Saturday), which is the deadline for any deal to be voted on. 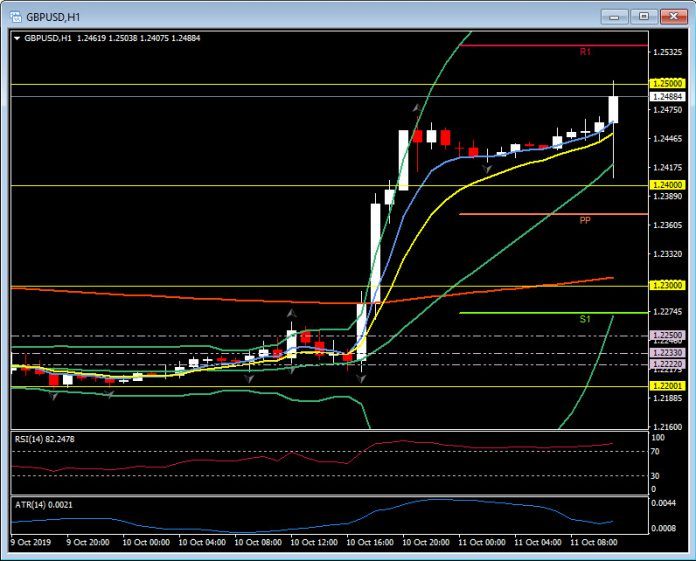