With the US Midterm Elections behind us and the Democrats victory in the House the U.S. dollar ended the day lower against most of the major currencies. The only currency that performed worse than the greenback was the Japanese Yen, which slid on the back of the risk rally. But it would be mistaken to automatically assume that investors interpreted the elections results as dollar negative because all of the selling happened during the European trading session. The U.S. dollar traded higher throughout NY trade as Treasury yields turned positive and equities soared.

Many thought that a split Congress and the corresponding political gridlock would crush the greenback but the Democrats' control of House led to an immediate shift in tone by the President. He said "Hopefully we can all work together next year to continue delivering for the American people, including on economic growth, infrastructure, trade, lowering the cost of prescription drugs. The Democrats will come to us with a plan for infrastructure, a plan for healthcare, a plan for whatever they're looking at and we'll negotiate." The President is willing to deal and the markets like it.

Everyone is hoping that we'll see a more collaborative attitude by the President and the Democrats as they recognize each other's powers to promote or stifle policy progress. Life will go on, the Fed will continue to raise interest rates and the Democrats won't put up too much resistance to the President's middle class tax cuts. Of course, there will be an emphasis on stalling many of the Administration's efforts at first from repealing the health care law, to changing campaign finance and ethics rules but shortly thereafter they will be looking to find common ground in easy areas such as infrastructure. In the near term, the market's positive reaction to the election reinforces expectations for December tightening and explains the dollar's resilience.

Looking ahead, we have a Federal Reserve monetary policy announcement on Thursday. While the Federal Reserve is widely expected to leave interest rates unchanged and reiterate their plans to raise interest rates in December, the tone of the FOMC statement will either remain unchanged or be a tad more cautious. We know from the Beige Book that the central bank is worried about trade uncertainties and since the last policy meeting in September there's been more setbacks than improvements in the US economy. As shown in the table below, there's been weakness in consumer spending, inflation the housing market and manufacturing activity. Although the labor market remains strong and many districts report labor shortages, many companies had a cautious guidance this quarter so hiring demand could ease. With that in mind, the dollar's reaction to this month's Fed meeting could be limited because it comes right after a rate hike with no press conference. The days of the dollar's rally are numbered but an unchanged statement could give the greenback a modest push. 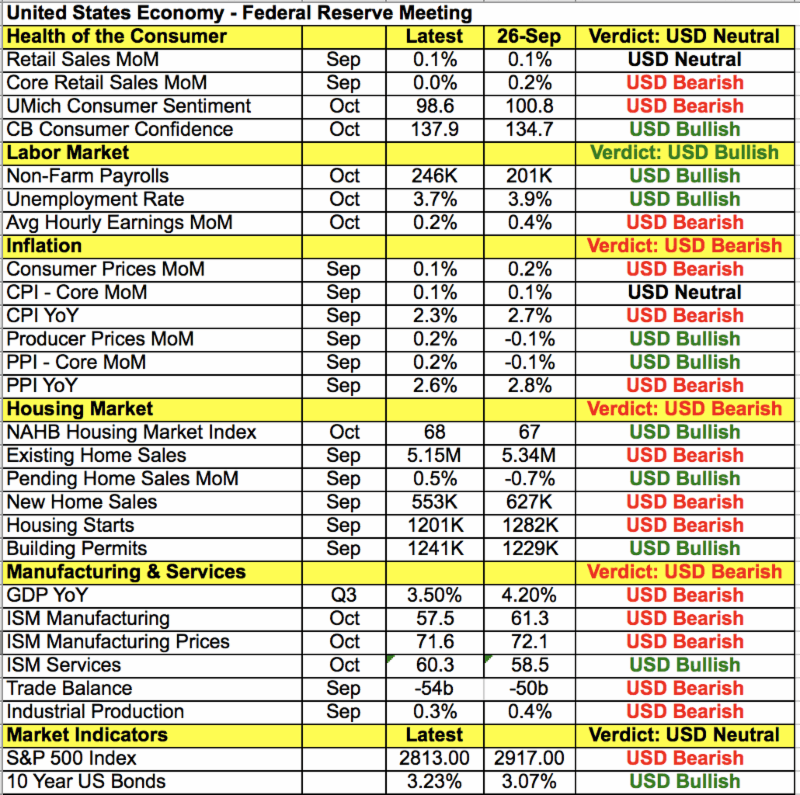