The greenback is having a hard time preserving its strength toward the end of May and the US Dollar Index (DXY) remains on track to post monthly losses for the first time in 2022. Following the US Federal Reserve’s decision to hike its policy rate by 50 basis points (bps) earlier in the month, policymakers have been voicing their willingness to raise the policy rate by a total of another 100 bps in the next two meetings.

Markets seem to have already priced in those expectations with the CME Group FedWatch Tool pointing to a more-than-80% probability of the Fed hiking by 50 bps in June and July. Hence, the dollar is struggling to find demand as investors see the US central bank adopting a cautious stance moving forward. Renewed optimism about the annual Consumer Price Index (CPI) having peaked at 8.3% in April and the hawkish tilt in other major central banks’ policy outlook, especially the European Central Bank (ECB), play a part in the recent dollar weakness as well. Nevertheless, there is still a bit of room for a hawkish surprise in the FOMC’s May Meeting Minutes. 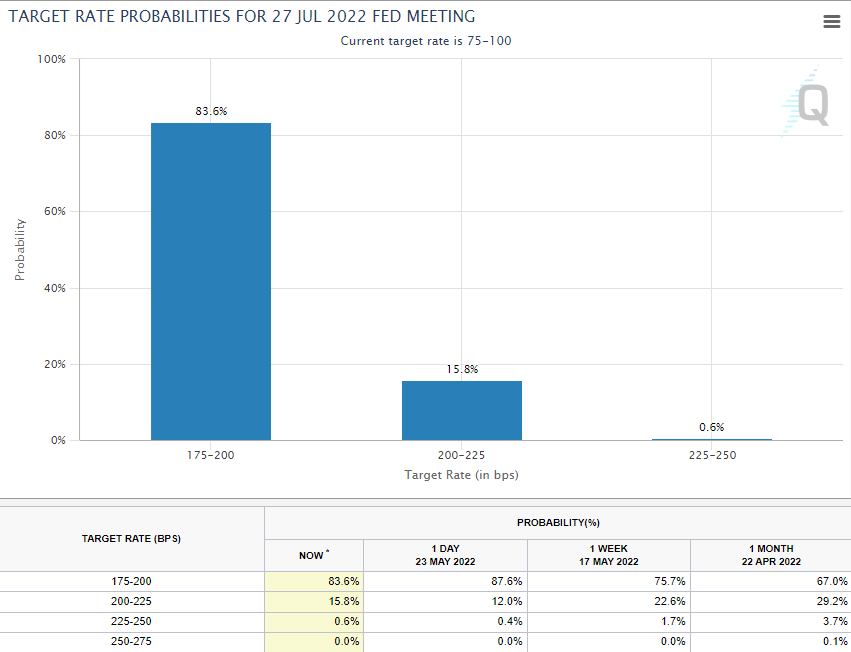 In the May policy statement, the FOMC announced that it will begin trimming its balance sheet on June 1, starting with a $47.5 billion cap on monthly runoff and rising to $95 billion monthly after three months. As it currently stands, the Fed is on track to execute a monthly reduction of $60 billion in Treasury securities and $35 billion of mortgage-backed securities each month from September.

The meeting minutes could offer additional details on the Fed’s quantitative tightening plan. When the Fed decided to raise the policy rate in 2017, the prepayment rate on MBS, which represents the ratio of borrowers paying the principal on their mortgages ahead of schedule, declined significantly. Jefferies economist Aneta Markowska thinks that if the prepayment rate were to fall to 10% from about 30%, as witnessed in the previous tightening cycle, MBS outflows could average about $20 billion a month. In such a scenario, the Fed would have to start selling MBS to reach the monthly reduction target of $95 billion.

While speaking at an event last week, New York Federal Reserve President John Williams said that their forecasts suggested that they won’t be able to reach the $35 billion monthly target for MBS redemptions and added that selling MBS could be an option down the road. The issue with MBS sales, however, is that they could translate into losses for the Fed. "A potential drawback of sales is that, depending on the interest rate path, they could result in realized market-to-market losses," Cleveland Federal Reserve President Loretta Mester said earlier in the month. Mester acknowledged that it would be a difficult problem to solve, especially at the political level.

In case the Fed’s publication shows that policymakers are willing to sell MBS to stay on the monthly QT target of $95 billion regardless of the potential political pushback, this could be seen as a hawkish development and help the greenback start outperforming its rivals.

On the other hand, the dollar could extend its downward correction if the minutes don’t offer any fresh insight into the Fed’s QT plan and reaffirm that policymakers remain reluctant to commit further policy moves after two more 50 basis points rate hikes.