The minutes of the April FOMC meeting were the opening move in the Fed’s long gambit to introduce higher interest rates without creating an economically destabilizing plunge in bond prices and a concomitant surge in yields.

June’s minutes, which will likely include a discussion of the new economic and rate forecasts, will move the rate piece a square closer to the endgame.

Near the end of the minutes of the April 27-28 Fed meeting, released on May 19, was the following comment.

“ A number of participants suggested that if the economy continued to make rapid progress toward the Committee’s goals, it might be appropriate at some point in upcoming meetings to begin discussing a plan for adjusting the pace of asset purchases.”

In his press conference after that April meeting, Federal Reserve Chair Jerome Powell repeatedly used the phrase “substantial further progress” to describe the conditions under which the governors would consider curtailing the bond purchase program. He spoke at length of the dislocations in the labor market and its impact on workers, especially in the lower-paid quartile. In response to a question about the economy that referenced the March payroll report of 916,000 issued three weeks earlier, Mr. Powell said, "yes we have had one excellent month, that is not enough."

Mr. Powell was still unwilling to praise the US recovery six weeks later at the June 16 meeting. His reticence was remarkable even though the economy had produced 559,000 jobs in May, expanded at a 6.4% annualised rate in the first quarter and was running at 10.5% in the second by the Atlanta Fed estimate just before the FOMC meeting.

Federal Reserve official rhetoric was in contrast to the Projection Materials also issued with the June rate decision. 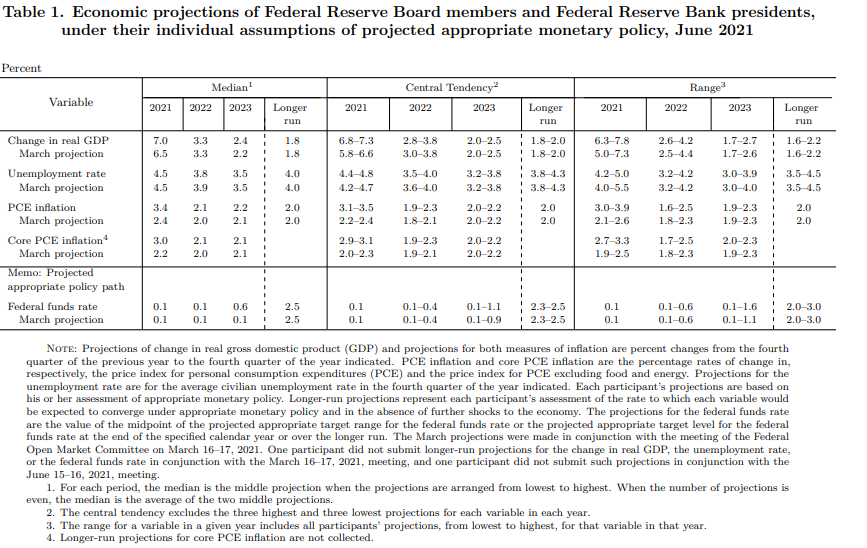 For the first time since the lockdowns of March and April last year created the greatest employment crisis since the Depression, a majority of the estimates in the so-called dot plot summary, 11 out of 18, had the base rate at 0.5% or higher at the end of 2023. Seven of the participants saw at least one increase next year. 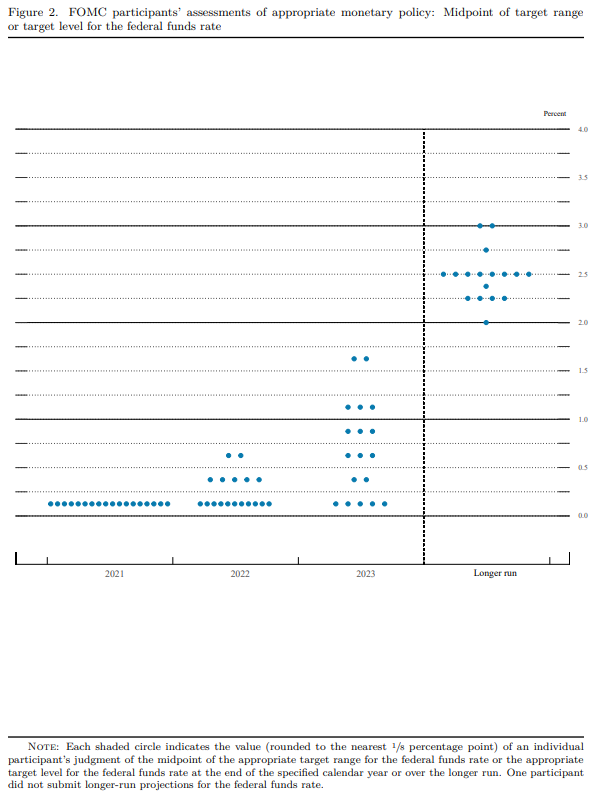 What is prompting this seeming schizophrenic split in Fed policy?

Projections assume robust growth and surging inflation. Mr. Powell and other governors remain coy about the conditions and timing for a change.

It is plain the next move in Fed policy will be higher rates and a bond taper would be the first step. The answer lies, as it usually does, in the Fed’s dual mandates, employment and inflation.

Inflation control means higher interest rates. While lower rates are the chief tool to keep the economy expanding, or as in this case, to exit a sharp, if artificially instituted recession.

The Fed’s problem is that the highly unusual circumstances of the lockdowns have created an economy of high growth, high inflation and high unemployment.

The current highly accommodative policy is designed to assist the recovery and encourage rehiring.

According to the Fed, last year’s lockdown price collapse is the source of this year’s vault in prices, the 5% Consumer Price Index and 3% core PCE May increases.

However, other factors, notably commodity price gains, rising wages from the labor shortage and a global computer chip scarcity are evidence of a longer price cycle. Rising wages are particularly easy to become embedded in inflation expectations.

Long-term inflation considerations are suggested in the advance of the rate schedule in 2023 and the 40% vote for at least one increase next year. This is intended to reassure the credit markets that there is no need to push rates higher in lieu of Fed involvement.

A second track began last September with the adoption of inflation averaging as the measurement of inflation.

The current rise in inflation was easy to predict once the economy recovered. The governors did not want the Treasury market stampeding rates higher as the expected sharp increases arrived. Averaging permits inflation to run above its 2% target for an unspecified time, until the Fed is satisfied that the long-term goal is achieved.

This policy grants the FOMC wide leeway in determining appropriate rates, no matter how sharp the inflation increases.

To this official policy trigger, the Fed had added its insistence that the inflation surge is a product of the base effect and the lockdown precipitated shortages and supply chain dislocations.

Fed officials have not come out and said that all the price increases are due to these causes, as indeed they are not, but the repetition has tended to crowd out other explanations.

Treasury rates have been mixed since the June 16 Fed meeting. 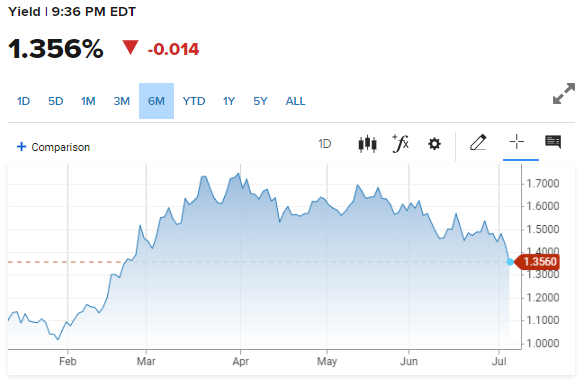 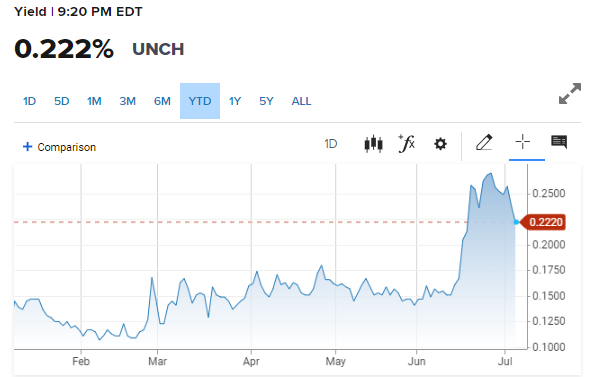 Two reasons stand out for the retreat in Treasury rates.

First, the horizon for a rate increase has moved no closer than 2023 since that was opened by the Projection Materials three weeks ago.

There has been one comment from Dallas Fed President Robert Kaplan that he would prefer higher interest rates sooner than later, but he is not currently a voting member on the FOMC.

While the Projection Materials and the dot-plot are the first official introduction of the eventual policy change, they are hardly timely.  In realistic terms, they have little to say about rate policy this year and nothing to say about tapering the bond program. That gradual realization is the largest reason behind the recent decline in Treasury rates.

The second reason is economic. The labor market has continued to disappoint. Even though June payrolls at 850,000 were considerably better than the 700,000 forecast and another 24,000 were added to May, the Nonfarm Payrolls recovery is just 70% of the March and April job losses, 15.6 million of 22.4 million.

In light of the 9.3 million positions on offer in May, a record for the Jobs Openings and Labor Turnover Survey (JOLTS), the tepid hiring this year has been a major policy impediment.

Purchasing Managers’ Indexes have underlined the distortions in the labor market. The manufacturing and services employment indexes both slipped below the 50 expansion-contraction line in June.

For manufacturing it was the first contraction since last November, for services since December. The services result was discouraging as it is by far the larger employer and the hospitality sector had shown strong employment gains in June.

Labor shortages are proving to be far more widespread and long-lasting than economists anticipated. Small businesses which have historically done most new hiring, were devastated by the lockdown and are one probable cause for the slow hiring. Another is the extended federal unemployment benefits which for many lower-wage workers are equal to a paycheck and hardly encourage a return to work.

Equities have moved steadily higher since the June 16 meeting, taking their cues from falling Treasury yields and not the distant fed funds rate projections.

For stocks, the impact of the minutes will depend on the implied timing of any bond taper. A specific time frame could have a substantial negative effect. 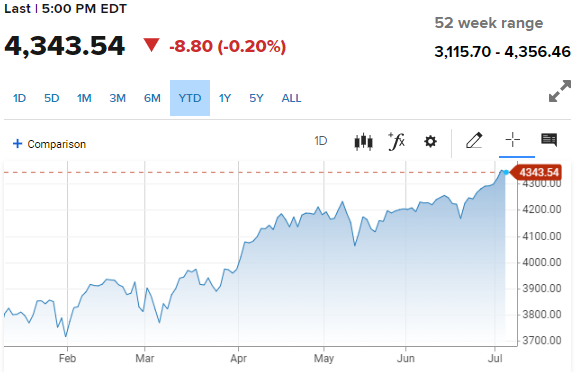 Foreign exchange markets have been a reminder that currencies are traded in pairs.
Even if US rates have fallen, the prospects for the American economy, vaccination program, labor market and corporate profits outstrip any of the greenback’s competitors. Given current conditions, the US recovery should easily outperform Europe, Japan, Canada and any other major economy.

Interest rates in the US will eventually rise. The closer the minutes make that seem, the better for the dollar. 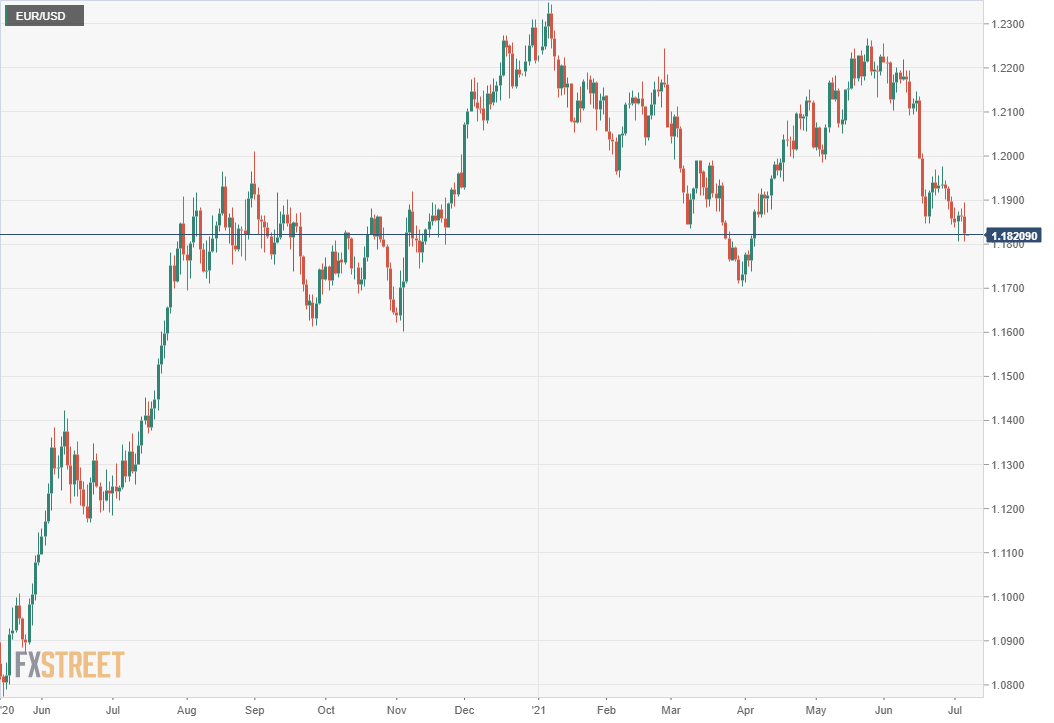 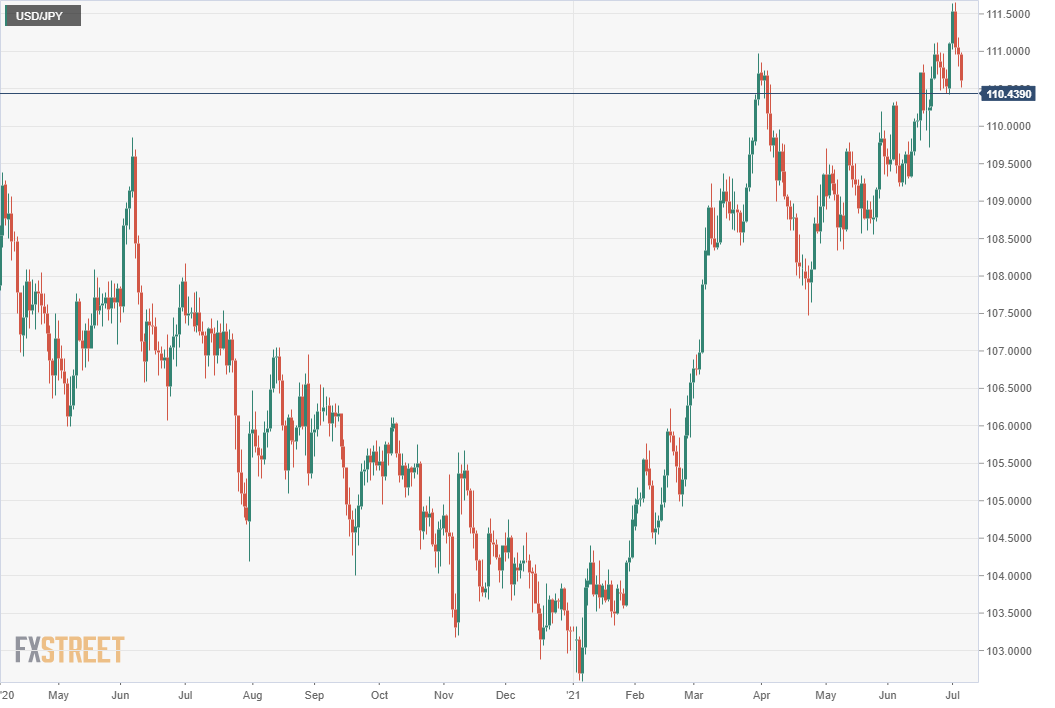 The minutes of the April meeting were the beginning of the change in Fed policy but the end is not yet in sight.

Expect this edited version of the FOMC discussion to move the public appreciation of policy a little closer to the goal of a reduction in bond purchases. The minutes are unlikely to provide specifics of economic conditions or timing of the coming policy shift.

The Fed’s annual Jackson Hole, Wyoming policy symposium may be a more congenial atmosphere for the Fed officials to admit and explore the conditions for a bond taper but the minutes of the June FOMC could contain the official agenda.