Three times a charm – the third consecutive triple-sized rate hike by the Federal Reserve puts borrowing costs above 3% – but it matters is 2023. The world's most powerful central bank has also released forecasts for next year – and they do not paint a pretty picture.

Rates will end 2023 at 4.6%, and markets had only forecast that for mid-year. Later on, the Fed foresees borrowing costs ending 2024 at 3.9% – that is a painfully long time to have rates so high. Relief will come only in 2025, with nearly 3% interest rates. Borrowing costs are now at this level 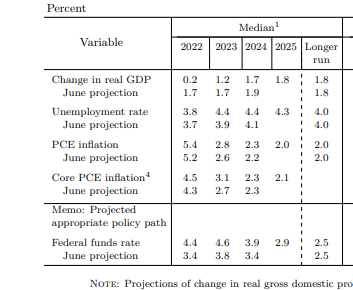 The Fed is willing to accept pain to bring down inflation, with higher projections for unemployment – 4.4% next year, up from the current 3.7% – and lower for growth. That is a clear hawkish message. There is no other central bank that is tackling inflation heds on – which means King Dollar is set to remain on its throne.

While the Fed is not forecasting an outright recession, the projected increase in the unemployment rate signal pain. It is essential to note that the Fed has two mandates – price stability and full employment. It has become clear that crushing inflation has near exclusivity.

The broad picture remains unchanged – there is no alternative to buying the US dollar. It is the cleanest shirt in the dirty pile, the bitter medicine of choice and any other metaphor. For that to change, Russia's war has to end, China's twin covid and property crises need to be resolved and most importantly – US inflation has to fall.

Without a clear deceleration in underlying inflation, it is hard to see the Fed – or the underlying currency– backing down. That means every dollar dip is a buying opportunity.