Time to retire "transitory" when talking about inflation – these words by Federal Reserve Chair Jerome Powell have set the stage for tighter monetary policy. Powell's hawkish shift on price pressures also came with a clear statement on accelerating the Fed's tapering process. A doubling of the tapering pace is given.

That means rate hikes are coming sooner – and when exactly and how many times in 2022 matter more than tapering.

Background: Inflation is up and unemployment is down

The headline Consumer Price Index (CPI) hit 6.8% in November, the highest since 1982. Even when stripping out food and energy prices – the latter's fall will be seen in December's report – inflation is rising. Core CPI jumped to 4.9%.

Even when looking at the Core PCE, the Fed's preferred gauge of price pressures, the figure is double the bank's 2% target: 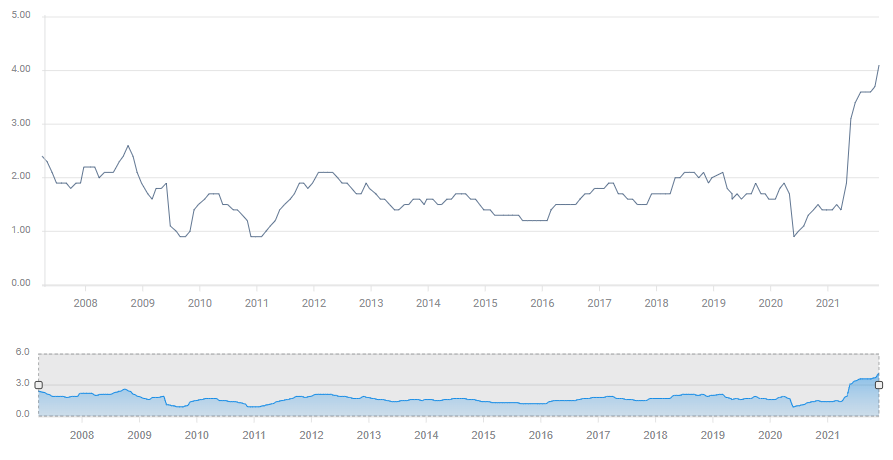 Inflation is one of the Fed's mandates, and the second is employment. While the latest Nonfarm Payrolls report missed estimates, jobs are on the rise. The gap in total employment has shrunk from some 10 million people to a handful of millions.

Moreover, the world's most powerful central bank was surely encouraged to see an increase in the labor participation rate – undoing the drop from the pandemic.

After months of stagnation, participation advanced to 61.8% in November.

Back in November, the Fed announced it is tapering its bond-buying program of $120 billion per month by $15 billion. Investors expect the bank to double the pace to $30 billion. That would imply three more months of reductions to conclude the scheme as the Fed is on course to purchase $90 billion worth of assets in December.

While markets are nervous about the prospects of fewer dollars printed, they are more anxious about higher interest rates. These expectations have caused hiccups in stocks and massive dollar strength.

March is when the Fed will refrain from expanding its balance sheet and when it can raise rates. Will it make a move in the spring or wait longer? How many hikes does it plan for 2022?

Some guidance will be given in the bank's projections, aka the "dot plot." The bank releases inflation, employment, growth and interest rate outlooks every three months, and that means now, in December. For markets, economic data is only of little interest, while projections for borrowing costs are all that matter.

Back in September, only half of the members foresaw higher interest rates in 2022. Given the heating economy and especially inflation, a majority is set to favor hikes, and the median of these forecasts is critical for the dollar and stocks.

1) Only one hike: This scenario is the most dovish one, and least likely. If officials see the drop in oil prices, the easing in chip shortages and weaker fiscal support in 2022 as substantial inflation downers, they could coalesce around "one and done."

Maintaining such a distance from bond markets and recent statements by officials seems unlikely, and would shock the dollar. Alongside a grand fall in the greenback, stocks would celebrate such a dovish outcome.

2) Two hikes: Such a scenario has medium-high probability and would maintain the Fed's image as dovish – staying one step behind markets. In this case, the greenback would suffer a setback, but not tumble.

The impact on stocks would likely be more significant – extending the "Santa Rally" in a gradual fashion.

3) Three hikes: This outcome has the highest probability, but just a touch above the previous one. It would show that Fed members have taken a more worrying approach to inflation and assure an early move already in March.

Even though it would only align the Fed with bond markets, it would still be considered hawkish and could give the dollar another small boost. Stocks would suffer and could continue struggling throughout the week.

4) Four hikes: Similar to the other extreme scenario, this is a shock scenario. By signing off on a hike every quarter would exceed market estimates, including those of stable Treasuries.

It would signal grave concern about prices, labor shortages, and housing activity. By waving a big bazooka, the Fed could eventually refrain from going all the way. Nevertheless, the stocks could suffer badly and have a sad Christmas. For dollar bulls, it would close 2021 with a bang. The probability is low.

The US economy is steaming hot and causing hot inflation, which the Fed now wants to fight with more tools. An accelerated tapering pace is a given, and markets will be watching the bank's dot-plot – forecasting between one and four hikes in 2022. Every dot makes a difference.