No, the title is not related to today's Fed decision. It is something related to corporate liquidity. Strains in the short-term funding market added an unexpected twist ahead of Wednesday's FOMC decision, and one that could have important implications. More on this below. The euro was the top performer Tuesday while the Swiss franc lagged. The Fed decision is at 2 pm EST, 7 pm London. A new Premium Insights' trade has been issued yesterday. 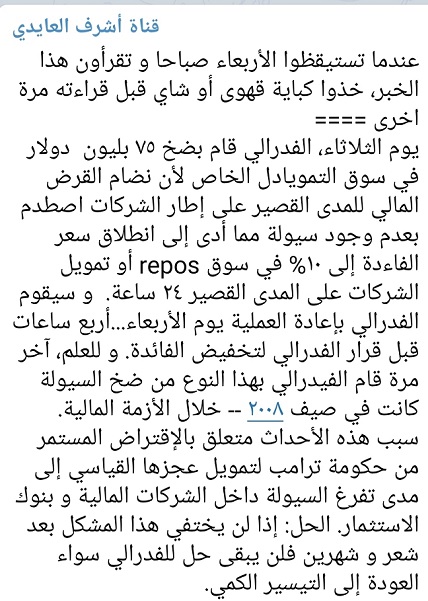 Some final economic data points ahead of the Fed were positive on Tuesday as industrial production cooled worries about manufacturing. The NAHB home builder survey also beat expectations in a sign that lower rates are enticing home buyers.

Those numbers were ignored by markets as the focus turned to a jump in repo lending rates. Short-term funding costs rose as high as 10% and forced the Fed to hastily arrange a $75 billion repo operation. In an embarrassing moment, the first try failed before the Fed got at $53B take-up in the second effort. Another operation is scheduled for Wednesday.

Short-term dollar-funding strains have hit markets before but came at quarter-end and year-end. This mid-month problem was likely caused by a confluence of factors including corporate bond issuance, tax payments and Treasury auction settlement – all of which drain reserves. So why were firms not ready for it?

What has the market worries is that it might not be those factors alone. The Fed's balance sheet runoff was always more art than science and policymakers believed that keeping it near $3.5 trillion preserved ample liquidity in the system. That may not be the case.

If so, the Fed could be forced to announce fresh measures in what would be interpreted as QE-lite. That speculation is likely what drove the dollar lower Wednesday. Other fresh factors to watch now include lowering IOER by 5 bps and a standing repo facility.

In terms of the bigger market move, a 25 basis point cut is priced in and signals about October will be key. The Fed likely still likely to describe it as a mid-cycle adjustment (and that language is key, and would be dollar positive) so the plan is probably to cut once more, then wait-and-see and expect guidance to be vague once again.  Also watch out for the FOMC dissenters, possibly 3-way dissent, with Rosengren & George voting to hold rates unchanged, Bullard asking for a 50-bp cut and the rest for 25-bps. A more likely scenario & a bad one for markets is for Bullard to vote along for 25-bps but 3rd dissenter joins Rosengren & George in voting for no cut.