The Federal Reserve signaled no rate hikes through 2023 and an "outcome-based" response. However, the bank's dovishness still allows for yields to advance and boost the dollar. What's next? Valeria Bednarik, Joseph Trevisani, and Yohay Elam discuss the latest developments in central banking, impact on currencies, melting gold, and more.

Yohay Elam: A paradigm shift in central banking? Federal Reserve Chair Jerome Powell said decisions are now "outcome-based" on any kind of tightening. The BOE seemed to follow by saying that it wants "clear evidence" of inflation progress before acting. Should traders focus on inflation figures?

Joseph Trevisani: I think the key is to watch what we do not so much what we say. Yes, short term rates are pinned to zero. Longer-term rates are rising sharply. That is the economic factor.

Valeria Bednarik: If we are talking about real inflation, guess we will have to sit long to see some action.

Yohay Elam: Indeed there is a divergence between the short and long ends of the yield curve, and with market reactions. The Fed will not raise short-term rates but allows long-term yields to rise, and that affects the dollar. Ten-year Treasuries are hovering around 1.75% as we speak.

Joseph Trevisani: Exactly. And the Fed did not address the issue yesterday nor did the BOE today, where the rate movement is the same.

Valeria Bednarik: Usually, that divergence suggests economic growth and possibly higher inflation. What bothers me is that the curve is moving ahead of reality. It's all based on hopes, which IMHO have quite a weak background.

Joseph Trevisani: You are right, it is moving ahead of reality, but the credit market has the longest view and is often right. Yes but that is three more than in December. If the economy does move, that number will grow.

Joseph Trevisani: I am skeptical, empirically skeptical about inflation. Globalization is still the order of the day and the experience with QE the last time around did not produce inflation.

Valeria Bednarik: More than the economy or inflation, I would say the key is the employment sector, at least in the US.

Joseph Trevisani: It may take a while to end the two-track labor market, high layoffs and claims from businesses that continue to fail, and high NFP from the many changes in the economy and GDP growth.  But as Val says, there is no proof as yet.

Valeria Bednarik: In the meantime, nor Powell neither Bailey seem worried. Not sure if their posture will help cool bond markets or have the opposite effect. Meanwhile, data is quite tepid. Today's EU trade figures and US employment ones were far from optimal. Maybe speculative interest will soon get a reality check.

Yohay Elam: For now, bank stocks benefit from higher yields, as they may be able to make more money. While tech stocks suffer. But at some point, higher yields would hit all companies.

Joseph Trevisani: Tech is particularly vulnerable to boom and bust because of the rapidly evolving technology, it is where the newest of the new arrives.

Yohay Elam: Broader stock markets seem a bit like that boiling frog legend – feeling OK while yields rise slowly, and panic in response to a quick boil, but at some point, the heat would become unbearable.

Joseph Trevisani: 10-year Treasury yield. From an economic point of view, I don't think there is cause for worry.  At some point, yes, but that point seems distant. 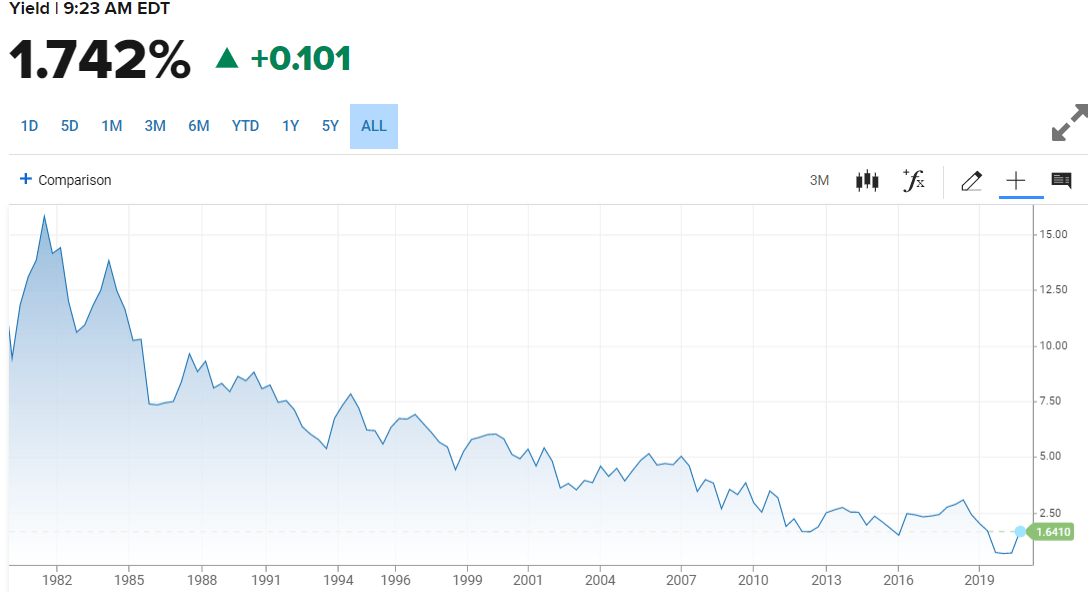 Valeria Bednarik: Taking a look at that chart, 2% is not enough. I would copy Powell and avoid mentioning a level.

Joseph Trevisani: Discretion is the better part of rate policy. The secular trend, as economists like to say is lower.

Joseph Trevisani: Interest rates remain the most correlated factor for currencies, even if they are being manipulated by central banks as never before.

Yohay Elam: I would say that central banks have always impacted interest rates, and have been taking that to new highs with every crisis

Joseph Trevisani: Interest rates, cannot and do not create economic growth. They are a major factor, perhaps the most important for investment. If the price of a loan does not accurately reflect the risk of an investment a basic economic check is distorted. Japan is the example when that distortion becomes permanent. I agree hubris is rampant in central banking. The Fed seems to be the affected least. Hubris and nemesis... Even if well-intended. But back to economics.

Valeria Bednarik: The Bank of Japan is trapped in its own spiderweb. Do you think that maybe the Fed is trying to avoid that?

Joseph Trevisani: Yes, I think so. Under Yellen and Powell.

Yohay Elam: According to the Japanese press.

Joseph Trevisani: Ha, well they have tried everything else. Under Yellen and Powell, the Fed did the most to normalize rates after the financial crisis and QE. I am going with the blind squirrel and acorn analogy for the BOJ.

Yohay Elam: BOJ tightening is a novelty indeed. Is 2021 the year of partying for the global economy?

Valeria Bednarik: Being less pessimistic than usual, my answer is still no. Would say that maybe 2022. A quarter is already gone, and progress is tough

Yohay Elam: Europe could still drag the rest of the world a bit down.

Joseph Trevisani: I think the second half.  Are you speaking of Foucault?

Valeria Bednarik: Yups, that's what I was thinking.

Joseph Trevisani: Just kidding. China is a large part of this.  with Biden in the WH the focus on China has diminished but it is very important for global growth.

Valeria Bednarik: I can only foresee a decade of uneven growth. Not sure if we can keep on talking about "global" growth. Outside developed economies, things had gone from bad to worse.

Yohay Elam: US stimulus is set to add some 1% to the global economy, but that will likely be uneven as you say.

Joseph Trevisani: You are right, global growth is a statistic, much less a  social reality.

Yohay Elam: What about gold? It advanced on Wednesday with the Fed's dovishness but suffers from yields.

Valeria Bednarik: Gold won't resist the dollar's strength on yields. As we always say, holding gold has no revenues. It's a safe-haven for extreme fear moments, and clearly, we have moved away from that spot.

Joseph Trevisani: Gold may be responding to inflation prospects but I think that link is weak.  The crisis pattern is the same as after the 2008 crisis. Exactly. 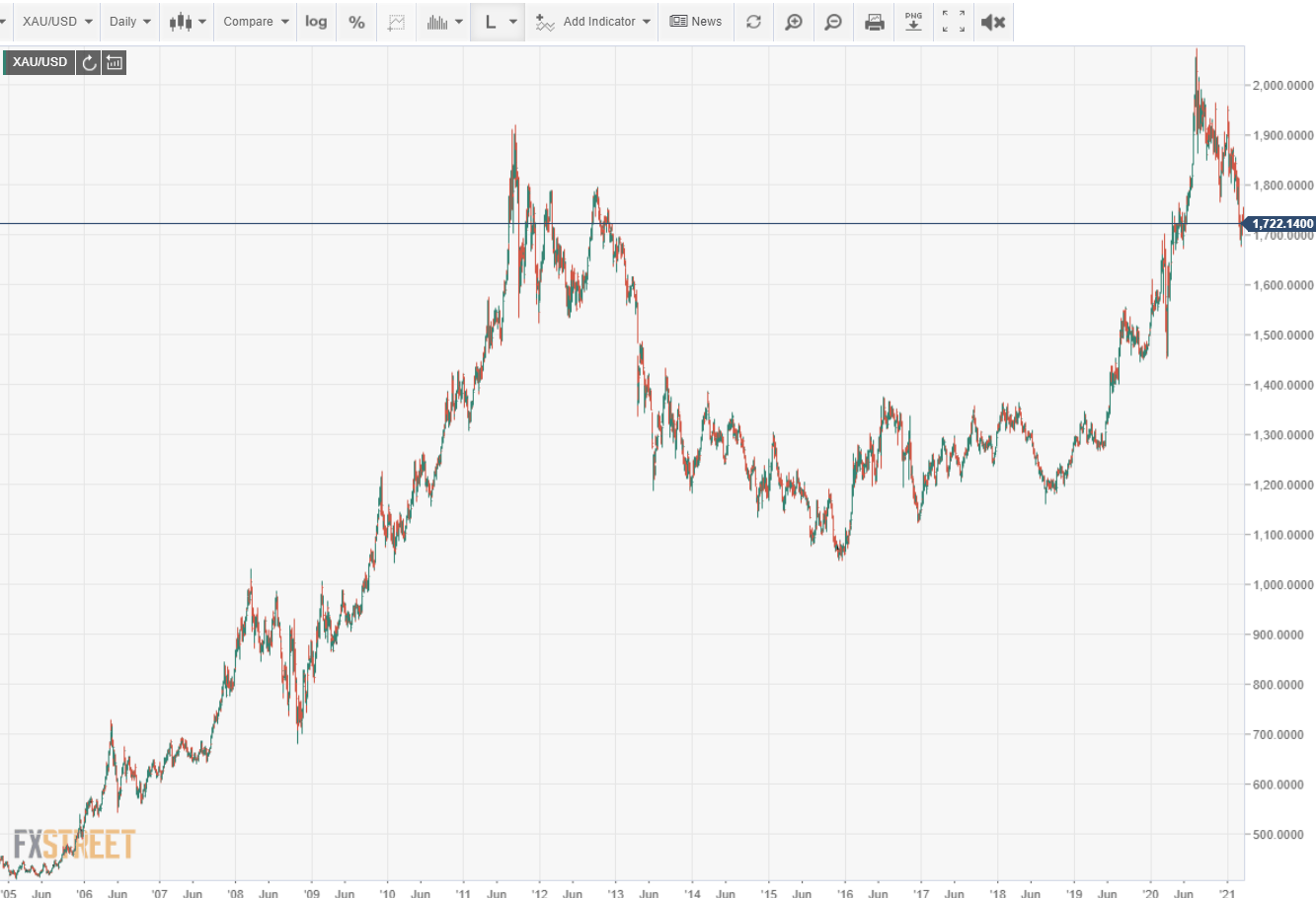 Yohay Elam: All in all, despite a dovish Fed, the dollar seems to have come on top. All about yields. What's next?

Joseph Trevisani: The pattern is established but it will need economic confirmation, the US economy will have to perform.

Joseph Trevisani: We must be right we all agree.

Yohay Elam: Yeah. Looking forward, we could see some end-of-quarter flows sometime next week. It is also the end of the fiscal year in Japan

Joseph Trevisani: Japan is interesting, but it is a whole discussion.

Valeria Bednarik: It has long ago become boring, the end of Japan's fiscal year. In the past, companies tend to repatriate funds ahead of the balance close and that triggered wild action in yen crosses. But that's no longer the case.

Joseph Trevisani: Interesting in a social, cultural, and historical sense, not economically, I agree.

Joseph Trevisani: I think so.

Yohay Elam: I think that we will soon see the fruits of America's rapid vaccination campaign and stimulus. That means the Fed raises rates sooner rather than later, at least in the markets' eyes. The dollar should respond positively.