In recent weeks, the prospect of several ECB rate hikes has caused an increase in Bund yields and, unexpectedly, several sovereign spreads. Beyond a certain point, higher spreads may become unwarranted. Under such circumstances, the ECB might consider stepping in to avoid that its policy transmission would be impacted. Determining whether sovereign spreads have increased too much is a real challenge. Historically, based on a 20-week moving window, the relationship (beta) between the BTP-Bund spread and Bund yields fluctuates a lot, so this calls for taking a longer perspective. Using data since 2013, the current spread is in line with an estimate based on current Bund yields. Clearly, other economic variables should be added to the analysis. It shows the complexity of the task should the ECB commit to address unwarranted spread widening.

Recently, certain euro area sovereign spreads - the difference between government bond yields in a given country and the yield on German government bonds of equivalent maturity, which are considered as the risk-free benchmark, - have widened significantly. This has raised concern that it could influence the transmission of monetary policy and has even led to an ad hoc meeting of the ECB governing council on 15 June “to exchange views on the current market situation”.

When the ECB signals its intentions to raise its deposit rate, one should expect that the entire structure of short and long-term interest rates, both in capital markets (government and corporate bond yields) and in bank-based financing, will shift upwards. Higher yields on German government bonds should cause some spread widening for more heavily indebted sovereign issuers but also for corporates (chart 1). This can occur even in the absence of a worsening in the near-term economic outlook. Investors who target a certain yield need to take less exposure to e.g. Italy or corporate bonds when Bund yields have increased significantly. The spread can also increase because investors require some extra yield as a protection against a possible deterioration of the credit quality. 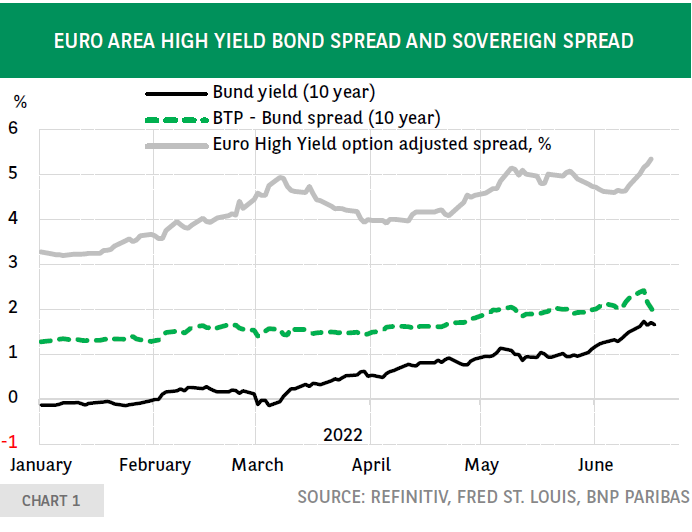 However, beyond a certain point, higher spreads become unwarranted based on the fundamentals in terms of credit quality. As a consequence, demand and economic activity might suffer in certain countries because, due to a disproportionate increase in long term interest rates - reflecting higher Bund yields and a wider spread -, financial conditions would tighten more than what the ECB was expecting when deciding to raise the deposit rate. This gives rise to fragmentation risk. The disconnect between spreads and fundamentals worsens the economic outlook, thereby causing higher risk aversion and further spread widening, ‘giving rise to non-linear and destabilizing dynamics’.

In such case, the ECB considers, with reason, it should step in to avoid that its policy transmission would be impacted. This is the logic behind the ‘believe me it will be enough’ speech of Mario Draghi in July 2012 or behind Isabel Schnabel’s recent speech at the Sorbonne in which she explained “there can be no doubt that, if and when needed, we can and will design and deploy new instruments to secure monetary policy transmission and hence our primary mandate of price stability.”