The European Central Bank will announce its decision on Monetary Policy on Thursday, October 28. The central bank is widely anticipated to keep policy rates unchanged but also to take its first step towards easing the massive financial support program meant to keep the system stable throughout the pandemic.

The main refi rate currently stands at 0%, while the marginal lending rate and the deposit rate are at  0.25% and -0.5%, respectively. Thus, for the time being, market participants have priced in a rate hike by the end of 2022.

No more room for dovishness

So far, European policymakers have refrained from offering a tapering timeline, instead maintaining a conservative stance. Market participants are hoping President Christine Lagarde paves the way for a December announcement, as policymakers cannot keep ignoring mounting inflationary pressures. Headline inflation in the EU has printed at 3.4% YoY in September, a 13-year high, while the German Consumer Price Index in the same period rose by 4.1%, the highest in almost three decades.

Also, and for the first time in more than seven years, Eurozone inflation expectations have surged past the ECB’s target of 2%, reaching 2.0509%, according to information released on Tuesday. At the same time, rising energy prices and supply chain bottlenecks add to the upsurge price pressures.

Policymakers have so far downplayed concerns over rising inflation, with President Lagarde stating early in October that  the central bank would “not overreact to supply shortages or rising energy prices, as our monetary policy cannot directly affect those phenomena.” Other members of the Governing Council have reinforced the belief that high inflation would likely be transitory.

What to expect this time

Generally speaking, expectations point to an extension of the Pandemic Emergency Purchase Program (PEPP) due to end in March 2022 and an answer to when the central bank plans to withdraw the pandemic support measures.  No changes are expected to policy rates.

As usual, President Christine Lagarde will have a hard time balancing the market’s expectations with her usual cautious stance. She will need to convince markets that they can handle slowing growth, mounting inflation and covid-related concerns while also taking baby steps towards normalization. The press conference following the announcement could do more bad to the EUR than the decision itself.

Heading into the event, the shared currency trades near its 2021 low of 1.1523 vs its American rival. The EUR/USD pair has fallen not only because of the broad dollar’s strength but also because EU data has been tepid, to say the least.

From a technical point of view, the bearish trend is firmly in place, which means that a dovish stance from the ECB will likely have a larger impact on the pair. If policymakers retain their conservative stance without giving any hint of tapering, the pair could pierce the year low and extend its slump towards the 1.1470 price zone, a long-term static critical area.

In the unlikely case that Lagarde & Co hint at a tighter monetary policy, the pair could reach 1.1670 and later extend its rally towards the 1.1740 price zone. Selling interest will likely be strong around the latter, preventing EUR/USD from advancing further. 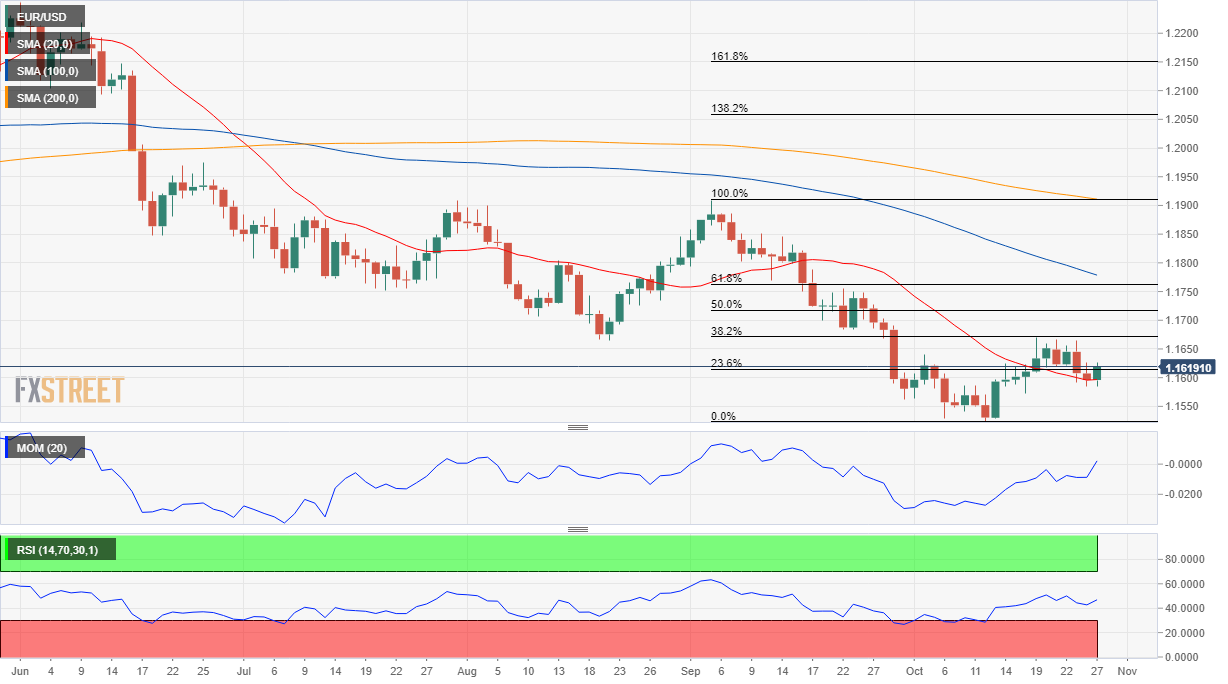