Near-term action is so far failing to benefit from bullish signal on Friday’s hammer candle, with a narrow range today being caused by holiday-thinned volumes, as the US and UK are closed.

Markets are cautious on hints that the European Central Bank and the US Federal Reserve are on course to start changing their firm dovish stance, while the inflation is also closely monitored, as the most recent strong rise is still seen by officials as a transitory process, while some analysts suggest that consumer prices have gained traction and are going to continue rising that may prompt the central banks to start tightening earlier.

Daily studies are overall positive and expected to remain biased higher while the price action remains above the bull trendline off 1.1704, however, the structure would stay fragile while broken 10DMA (1.2203) caps.

Caution on sustained break above 1.22 resistance zone that would neutralize downside threats and generate stronger signal of an end of a corrective phase. 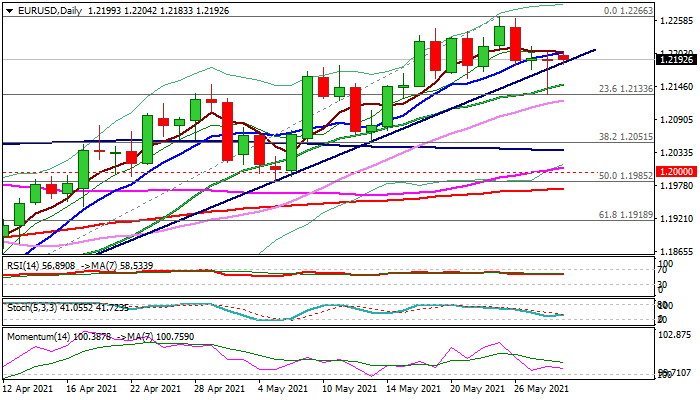