The EUR/USD pair gained strong positive traction for the second consecutive session on Tuesday and surged to two-week tops. The momentum also marked the fourth day of a positive move and was sponsored by a combination of factors. The shared currency got a strong boost from reports that the EU may hit its vaccination target much earlier than projected. Bloomberg – citing an internal memo from EU member states – reported that Germany, France, Italy, and Spain will have sufficient supplies to vaccinate at least 57% of their total populations by the end of June. Apart from this, the better-than-expected release of the Eurozone Sentix Investor Confidence Index, which jumped to 13.1 for April, further underpinned the euro.

On the other hand, the US dollar struggled to preserve its intraday gains and was pressured by the recent decline in the US Treasury bond yields. In fact, the yield on the benchmark 10-year US government bond retreated further from a 14-month high level of 1.776% touched last Tuesday amid reduced bets for an earlier than anticipated Fed rate hike. It is worth recalling that the prospects for a relatively faster US economy recovery had raised doubts that the Fed will retain ultra-low interest rates for a longer period. Hence, the focus will be on Wednesday's release of the latest FOMC monetary policy meeting minutes.

Investors remained optimistic about the US economic outlook, thanks to the impressive pace of coronavirus vaccinations and US President Joe Biden's over $2 trillion infrastructure spending plan. Markets still believe that a stronger recovery will force the Fed to hike rates sooner rather than later. Any clues that the conditions to begin tightening were discussed at the meeting held on March 16-17 should provide a fresh lift to the greenback and set the stage for the resumption of the pair's three-month-old downward trajectory.

In the meantime, a modest uptick in the US bond yields assisted the USD to stall its pullback from four-month tops and gain some traction during the Asian session on Wednesday. This, in turn, kept a lid on any further gains for the major, at least for the time being. Heading into the key event risk, the final version of the Eurozone PMI prints might influence the common currency and produce some trading opportunities around the major.

From a technical perspective, the recent bounce from the 1.1700 mark, or multi-month lows stalled near the very important 200-day SMA. This is closely followed by the 38.2% Fibonacci level of the 1.2243-1.1704 recent leg down, around 1.1900-10 region, which if cleared decisively will set the stage for additional gains. The pair might accelerate the momentum further towards the 1.1980-85 supply zone, which coincides with the 50% Fibo. level. Some follow-through buying beyond the key 1.2000 psychological mark will negate any negative bias and pave the way for a further near-term appreciating move.

On the flip side, any meaningful slide towards the 23.6% Fibo. level, around the 1.1830-25 region might now be seen as a buying opportunity and remain limited. That said, failure to defend the mentioned support, leading to a subsequent slide below the 1.1800 mark might turn the pair vulnerable. The next relevant support on the downside is pegged near mid-1.1700s before the pair eventually slides back towards challenging multi-month lows, around the 1.1700 mark. 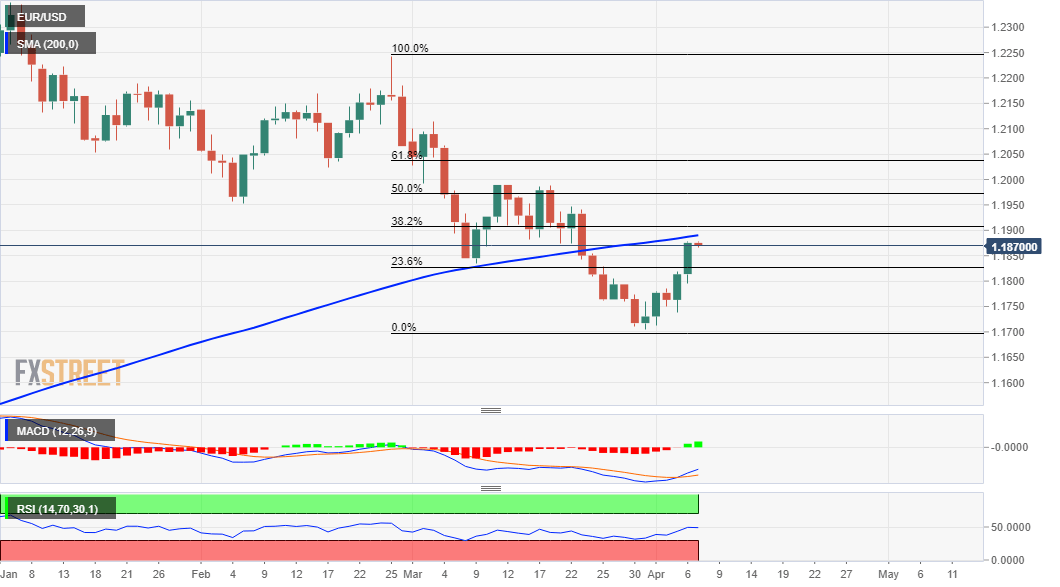