A one-two punch against EUR/USD? The world's most popular currency pair failed to recover – despite an improvement in stock markets and a drop in the US dollar. The common currency has been held back by doubts about the EU Fund.

German Chancellor Angela Merkel said that she expects "good cooperation" with EU partners – a sign that a compromise on the EU fund has yet to be reached. Despite a Franco-German agreement on €500 billion mutually funded grants, the "Frugal Four" remain opposed. The group – Austria, the Netherlands, Sweden, and Denmark – prefer loans over awarding money.

Tension is mounting ahead of the face-to-face leaders' summit next week. Christine Lagarde, President of the European Central Bank, lowered expectations of the event and ahead of the bank's rate decision next week. She said that the ECB's actions were effective and efficient, hinting at a pause. However, she may try pushing politicians to act.

Markets were partially encouraged by the relatively low COVID-19 figures published on Monday, and the moderate increase on Tuesday. However, the drops are common after the weekend, and especially so after the long Independence Day holiday. However, administrative work tends to catch up by mid-week, causing spikes on Wednesdays.

It is essential to note that Texas, California, Florida, and Arizona have only recently reimposed restrictions. There is a lag of some two-three weeks before lockdown measures have any effect. The US heatwave – keeping people indoors with airconditioning – may also propagate the virus.

An increase in cases, hospitalizations, and deaths – the latter seeming to bottom out – may dampen the mood and boost the safe-haven dollar. 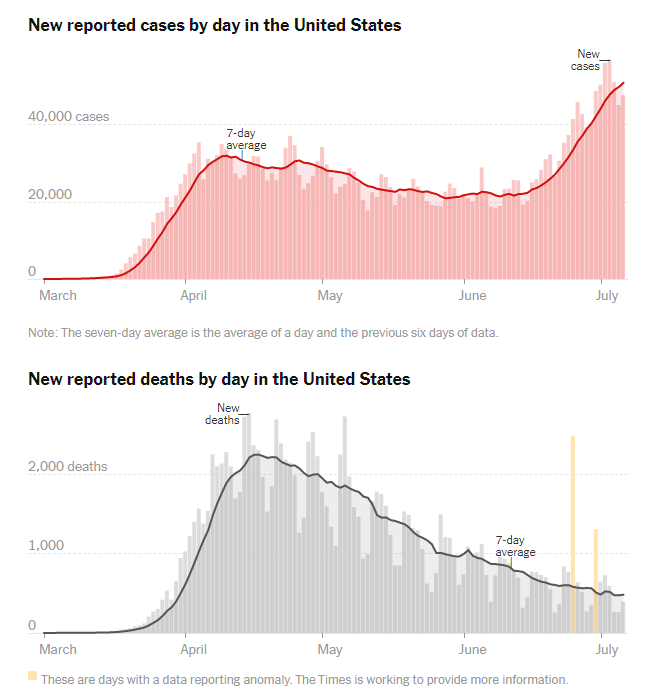 Euro/dollar is trading above one uptrend support line, which has been accompanying since early July and also tops another more moderate one. However, its failure to advance makes these lines closer and risks losing them. The uptrend lines are backed up by the 50, 100, and 200 Simple Moving Averages on the four-hour chart. Momentum remains positive.

All in all, bulls are in the lead but are at growing risk.

Resistance is at 1.13, a round number that previously capped EUR/USD, followed by 1.1350, the recent double-top. Further above, 1.1385 awaits the currency pair.