Lagarde has picked the low-hanging fruit – and now needs her political skills to poke policymakers on the fiscal front – without scaring markets, a fine balancing act.

The European Central Bank is set to leave its policy unchanged in its July meeting. The Frankfurt-based institution is set to take a break after topping up its Pandemic Emergency Purchase Program (PEPP) with €600 billion in June. This bond-buying scheme – which has fewer constraints than previous ones – now totals €1.35 trillion.

That June announcement exceeded economists' expectations and sent the euro higher. Contrary to pre-pandemic times, printing money is seen as supportive to the economy – as governments' borrowing costs drop and they are able to deploy more funds. Consequently, output has room to rise and so does the currency.

Christine Lagarde, President of the European Central Bank set the stage for inaction in the upcoming meeting by telling the FT "...we have done so much that we have quite a bit of time to assess incoming data carefully"

The ECB is also set to leave its interest rates unchanged, with the main lending rate at 0% and the deposit rate at -0.50%. Recent inflation figures have held up above 0%, making further accommodation – lower real borrowing costs – unnecessary at this point.

She also patted her institution on the bank by raising its efficiency and effectiveness in doing its part in confronting the pandemic. What about the fiscal response? The former French politician also commented: "I wouldn't put all my bets on 18 July" – referring to the EU Summit.

Pushing governments to act, but not too hard

EU leaders will hold their first face-to-face summit on July 17-18 – just after the ECB meeting on July 16. The No. 1 topic is the EU recovery fund. The European Commission's ambitious €750 billion fiscal plan consists of a controversial component – €500 billion in grants funded by the mutual borrowing. These are "coronabonds" or imply a "transfer union" in all but name for critics.

Investors thought that German and French backing to the plan would be sufficient to bring it over the line. However, the Berlin-Paris axis has been met with fierce opposition from the "Frugal Four" – Austria, the Netherlands, Sweden, and Denmark. Previous summits failed to yield a compromise that would pleas both hard-hit countries such as Italy and the stubborn Dutch.

While Lagarde has called for lower expectations, the stakes are high and she will likely reiterate her call on governments to act. The ECB has been pushing leaders to spend well before Lagarde took over in November 2019 – with predecessor Mario Draghi upping the ante over the years.

The central bank's economic assessments and projections carry considerable weight and it could urge governments to act by warning of the long-term damage that the pandemic could inflict.

Lagarde's warning would compound the European Commission's latest forecasts, which included a downgrade to eurozone Gross Domestic Product contraction from -7.7% to 8.7%. 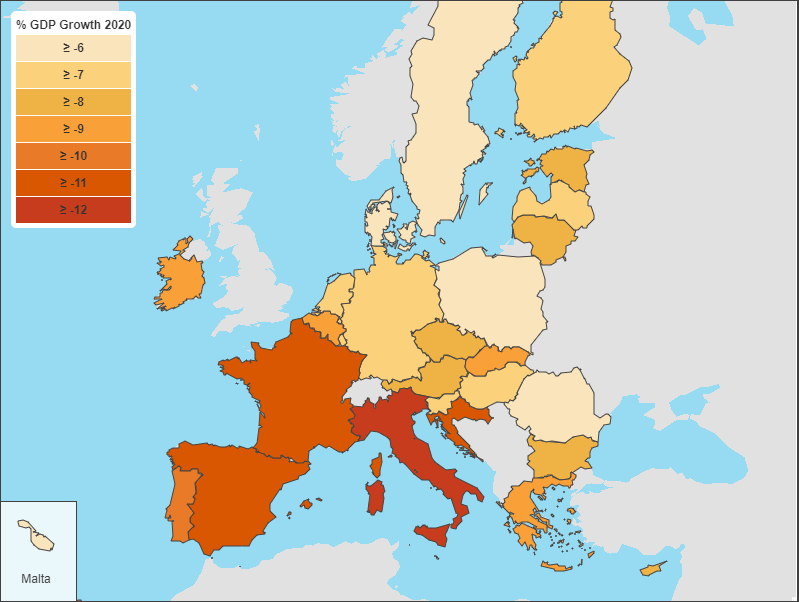 Convincing countries to act would boost the euro – but painting a dark picture may also scare investors. If the situation is so dire, investors could assess that the ECB is resigned to accepting the deterioration and worse off – is desperate and out of ammunition.

If Lagarde is all gloom, EUR/USD has room to fall, while a more balanced message would probably lift the common currency once again. That could be in the form of signaling that it is now governments turn, but readying more monetary stimulus afterward.

The ECB is set to leave its policy unchanged and the focus is on its message to leaders ahead of the EU Summit. A balanced message that calls governments to act without sounding depressing would keep the euro bid, while a gloomy, helpless stance would push it down.