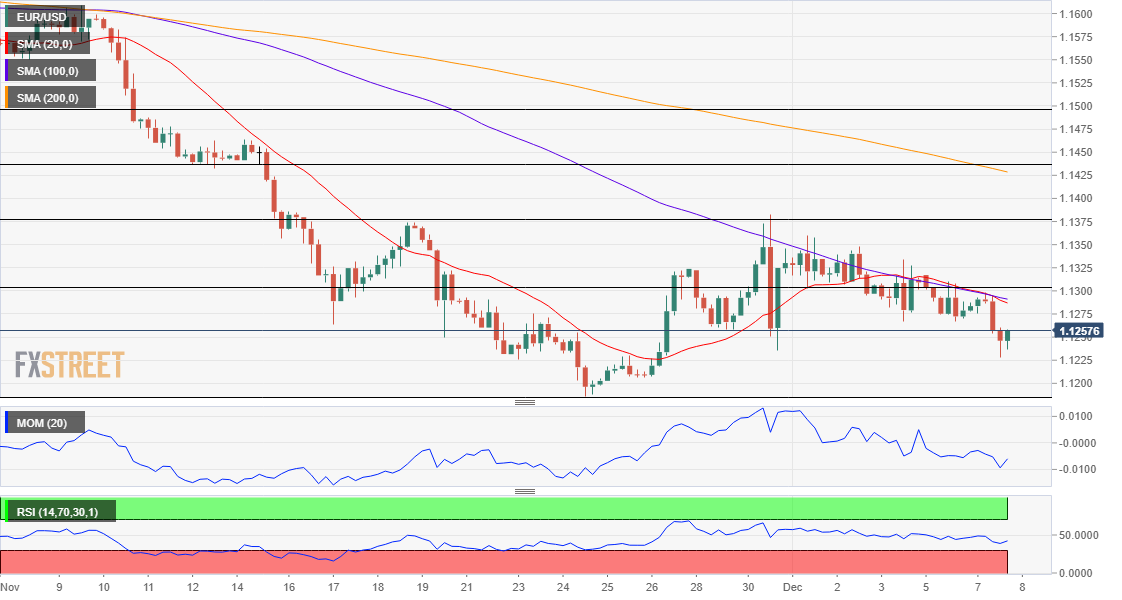 The shared currency was among the weakest USD rivals on Tuesday, with EUR/USD falling to 1.1227, its lowest this December. The pair hovers in the 1.1250 price zone heading into the Asian opening, incapable of recovering despite the receding dollar’s demand amid prevalent optimism.

The market’s mood was optimistic amid continued speculation that the coronavirus Omicron variant is milder, so restrictive measures won’t be required. Nevertheless, it’s too early to say so, and at this point, is more hope than knowledge, although enough to keep stocks rallying. Global indexes surged while US government bond yields reached fresh weekly highs. The dollar initially advance with demand receding in the last trading session of the day.

EU data failed to impress, as the EU Q3 Gross Domestic Product was confirmed at 2.2% QoQ, while Germany Industrial Production contracted 0.6% YoY, much worse than the 8.8% advance expected. Additionally, the German ZEW Survey on Economic Sentiment improved in the country to 29.9 in December and to 26.8 for the EU, although the assessment of the current situation plummeted to -7.4 vs the 5 anticipated by markets.

As for the US, the country published the October Trade Balance, which posted a deficit of $83.2 billion. Also, Q3 Nonfarm Productivity resulted at -5.2%, while Unit Labor Costs for the same period improved to 9.6%. Wednesday’s macroeconomic calendar will be light,  with no data of interest in the EU or the US.

The EUR/USD pair is down for a second consecutive day and not far from its year low at 1.1185. According to the daily chart, further slides are likely, as the pair keeps meeting sellers around a bearish 20 SMA, while technical indicators resumed their declines within negative levels.

In the near term, and according to the 4-hour chart, the risk is skewed to the downside. The Momentum indicator keeps heading south below its midline, while the RSI consolidates around 34, reflecting prevalent selling interest. Meanwhile,  the 20 and 100 SMAs maintain their bearish slopes, converging at around 1.1300. The pair is poised to test the 1.1200 level, while a break below it exposes the 1.1160 price zone, where the pair bottomed on June 2020.