The EUR/USD is trading around 1.1700, above the previous levels. The common currency got a boost from a report late on Wednesday. Bloomberg reported that some members of the European Central Bank see a rate hike in late 2019 as "too late". Bond markets now reflect a high chance of a rate rise in September 2019. The EUR/USD moved up on Wednesday and extended its gains on Thursday.

However, it is important to remember that the ECB's Governing Council is comprised of both dovish members like President Draghi and hawkish ones, most notable Jens Weidmann, the head of the German Bundesbank. A divergence within the ranks of the Frankfurt-based institution is therefore not earth-shattering news and may explain the relatively shallow movement. In addition, the difference between a rate hike in 14 months or 16 months is not that important at this point in time. In one year, the difference between a rate rise in two or four months is already quite significant, but from now to next year many things can happen.

Another factor helping the pair tick up is the relative calm in markets around trade wars. Comments from China on Wednesday and today help calm the nerves. The world's second-largest economy conveys a message that they will not be the first to fire shots in the trade war. The statements precede the US move due on Friday. The Trump Administration is set to impose tariffs on Chinese goods and China is expected to retaliate quite fast. Some hope for a last-moment deal, but the chances are slim.

Big day in the US

German Factory Orders came out with an increase of 2.6% in June, better than had been expected. More importantly, the US calendar is packed with top-tier events. The first one is the ADP Non-Farm Payrolls, at 12:15, which is projected to be similar to the previous figure which stood at 178K. See how to trade the ADP NFP with EUR/USD.

Last but not least, the Fed releases the FOMC Meeting Minutes from the June meeting, where it made a "hawkish hike". It will be interesting to see if the high level of optimism prevails in this document or if trade concerns receive more attention than previously expressed See: FOMC Minutes preview: Powerful Powell under scrutiny

As mentioned earlier, trade wars are projected to take center stage on Friday, but any news may be felt today as well. 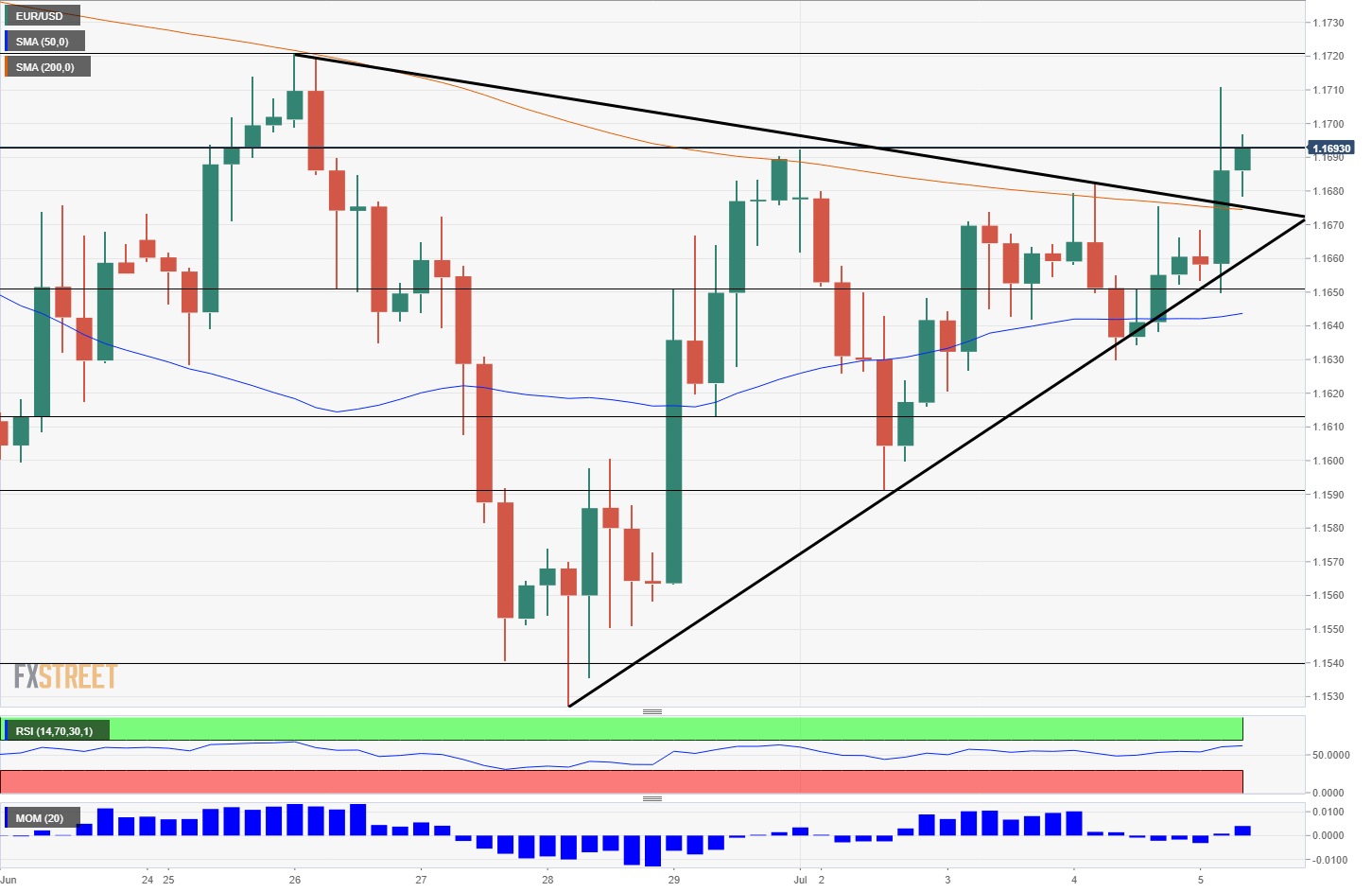 The EUR/USD broke above the downtrend resistance line that accompanied it since June 25th. The narrowing wedge limited its movements and the pair chose the upside. The Relative Strength Index is also bullish: above 50 but below 70, which represents overbought territory. Momentum has also turned slightly positive.