New month, new gains for EUR/USD? Not so fast. Apart from the technical confluence, the euro may find it hard to take advantage of the dollar's decline. First, while the EU is trying to ramp up its vaccination campaign, it is far behind America's accelerated pace – with Johnson and Johnson's single-shot solution added to its arsenal.

Another factor that could keep the common currency lower is the slow-moving European Central Bank. Officials at the Frankfurt-based institution expressed concerns about rising bond yields in the old continent, but are they willing to act?

Weekly purchase data from the ECB is due out later in the day and it will likely show the bank remains on the sidelines – contrary to the Reserve Bank of Australia which showed determination in depressing any speculation against the land down under's bonds. Higher returns on long-term debt may undermine the old continent's recovery.

On the other side of the EUR/USD equation, the slide in the dollar may also prove temporary. The new month has brought some calm, with US Treasuries finding some fresh demand and equities rising, thus pushing the safe-haven greenback lower. However, upbeat US data may turn things around.

The ISM Manufacturing Purchasing Managers' Index will likely show robust growth in the industrial sector, which has been less affected by the pandemic. The forward-looking survey also serves as a hint toward Friday's Nonfarm Payrolls and hopes for a pick-up in employment could revive concerns about overheating of the economy. A consequent sell-off in bonds could boost the greenback.

See US ISM Manufacturing PMI February Preview: Will business catch up with consumers?

Worries about inflation could also come from Capitol Hill. After the House of Representatives passed President Joe Biden's $1.9 trillion covid relief package, it now moves to the Senate, where Democrats have the thinnest of margins. Will compromises with moderates cause a squeeze in the stimulus? Probably not.

According to reports, the ruling party is ready to sacrifice the increase in the minimum wage, after attempts to find workarounds failed to make headway. If conservative Democrats such as Joe Manchin III halt pay rises, they could accept other measures and perhaps pass the vast majority of the package. In that case, prospects of robust expenditure would weigh on bonds, boosting yields and the dollar.

All in all, the greenback has room to recover and the euro may fail to make headway – a win-win for the bears. 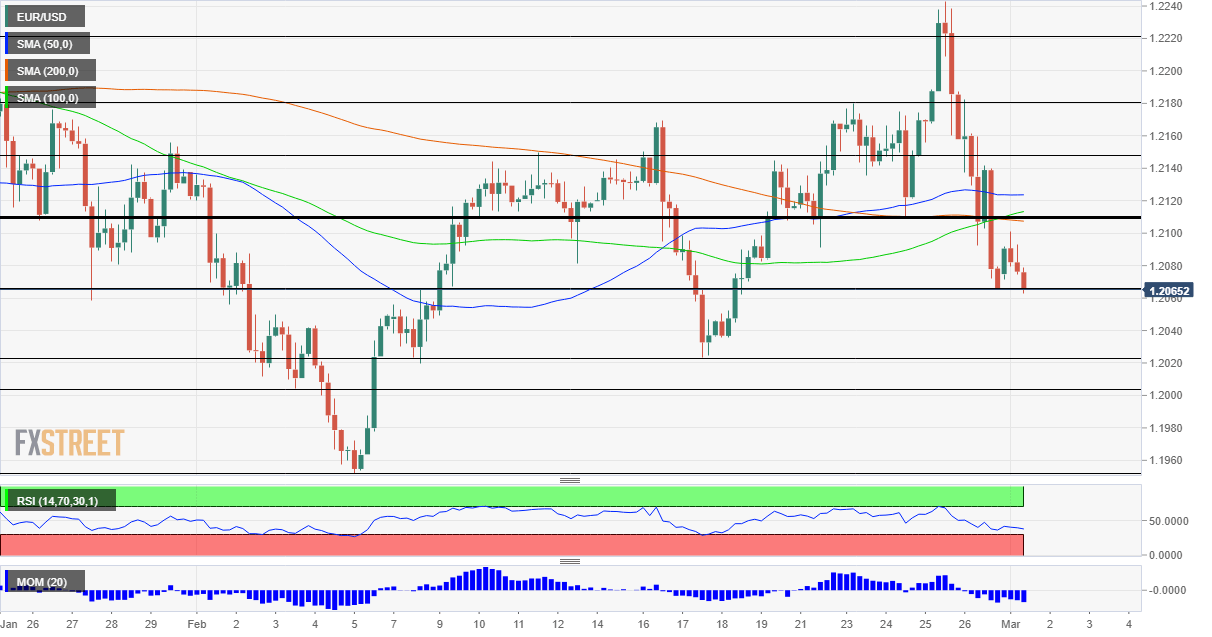 Euro/dollar has been suffering from downside momentum on the four-hour chart and trades below the 50, 100 and 200 Simple Moving Averages. Critical resistance awaits at 1.2110, which is the confluence of the 50 and 100 SMAs and also a swing low seen last week.