One step up, now two steps down? Forex trading is never a one-way street and every trend includes setbacks – and EUR/USD's recent bounce from 1.17 may be one of those, ahead of a downtrend.

US ten-year yields have retreated from their new cycle highs of 1.77% toward 1.70%, allowing the dollar to edge down from its highs. Some bargain-seekers have piled into Treasuries ahead of President Joe Biden's critical speech. The Commander in Chief is set to present a massive infrastructure plan, which includes green investment and perhaps expenditure in "human infrastructure" in addition to roads and bridges.

The roughly $2 trillion plan is set to run for around eight years and may include tax hikes that would last even longer. It is unclear if Biden will aim for one large package or postpone part of the spending and also the tax hikes to a second phase. If the US funds its new spending only by issuing more debt, Treasuries may suffer a sell-off and the resulting higher yields would boost the dollar.

In any case, the greenback has other reasons to rise. The Conference Board's Consumer Confidence gauge jumped to 109.7, far exceeding estimates. Americans seem content with improving prospects, especially after receiving stimulus checks as part of Biden's covid relief program.

ADP's private-sector jobs report is due out ahead of the president's speech and is forecast to show an increase of over half a million positions. The payroll firm's statistics are not well-correlated with the official Nonfarm Payrolls report but tend to move markets. Any beat would lift the dollar.

On the other side of the pond, another president is set to deliver a speech – which will likely have a different tone. French President Emmanuel Macron is set to announce new measures to curb the rising number of COVID-19 cases, which is threatening to overwhelm French hospitals. In Germany, authorities have banned the use of AstraZeneca's vaccine for people under 60 after new cases of blood clots.

To add insult to injury, German unemployment figures disappointed with a minor drop of only 8,000, showing that the continent's largest economy is still struggling. Eurozone inflation figures are due out later and are projected to show an increase in March – albeit due to base effects. Prices plunged in March 2020 as the pandemic paralyzed economic activity.

Some support for the euro has come from Christine Lagarde, President of the European Central Bank. In a TV interview, Lagarde said that "markets can test us as much as they want" – daring "vigilantes" to sell bonds, with the ECB there to step in. Her firm commitment to backing the recovery are providing some stability.

All in all, America's vaccine and fiscal advantages over Europe are set to extend the broader downtrend. 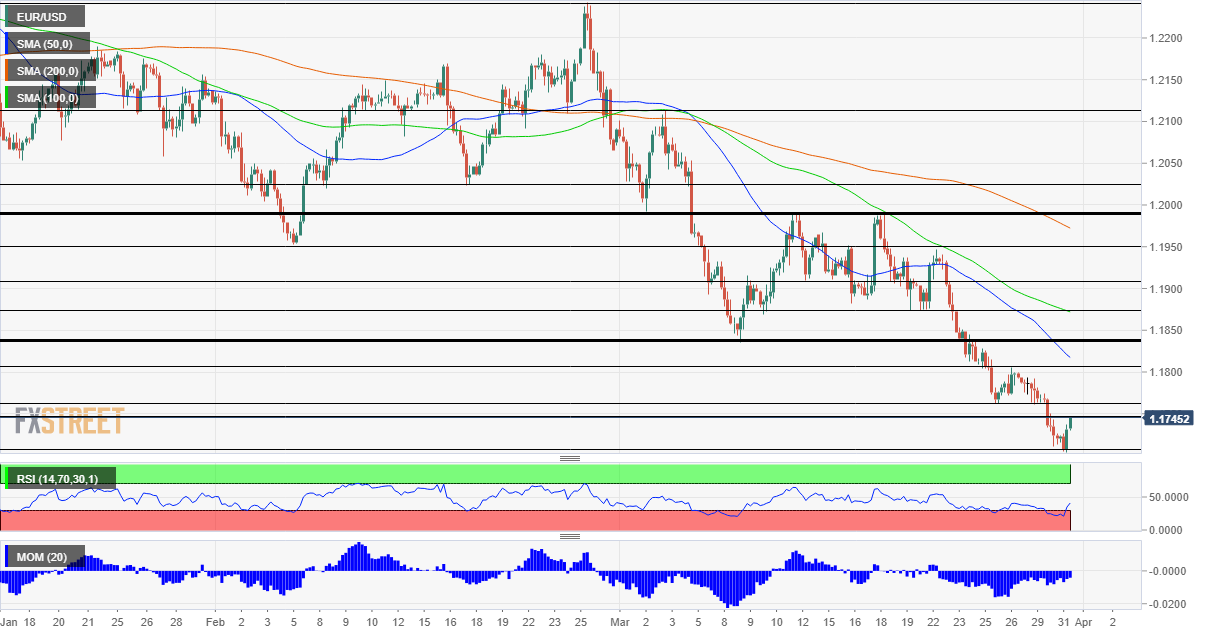 The four-hour chart continues showing a downtrend since the currency pair hit a high of 1.2250 in late February. Momentum remains to the downside and EUR/USD trades below the 50, 100 and 200 Simple Moving Averages. Moreover, the Relative Strength Index (RSI) climbed above the 30 levels, thus exiting oversold conditions and allowing for additional falls.

Critical support awaits at 1.17 – EUR/USD launch level in 1999 and a psychologically significant level. The pair nearly touched it. Further down, 1.1630 and 1.16 played key roles in November.