Blue Monday is here – the holidays are a distant memory, the days are still short and cold, depression is in abundance. That also seems to be the picture for EUR/USD, which is struggling on the lower ground after tumbling last week. However, there is room to recover.

The US dollar benefited from safe-haven flows in response to poor US data – with the last blow coming from the 1.4% plunge in December's Retail Sales statistics. They were not worse than estimated but also came on top of downward revisions for November.

However, there is room for optimism for the US and global economies that could boost sentiment and weigh on the greenback. President-elect Joe Biden enters the White House on Wednesday and is set to advance his $1.9 trillion stimulus plan – and also a massive vaccination campaign.

Biden aims to have 100 million Americans inoculated within his first 100 days – a target that is achievable according to Anthony Fauci, America's lead epidemiologist. Democrats' majorities in Congress – aka "blue wave" imply high chances of pushing through his agenda.

For dollar bears, another source of optimism comes from the Federal Reserve. Fed Chair Jerome Powell, laid his foot down last week by ending talk of an early tapering of bond buys, which had boosted the greenback beforehand.

Back in the old continent, trouble continues brewing in Italy, where Prime Minister Giuseppe Conte faces votes of no-confidence. On the other hand, Armin Laschet, a moderate, has been elected leader of Chancellor Angela Merkel's CDU Party. The pro-European leader of North-Rhine Westphalia is in pole position to become the next leader of the continent's largest country, a prospect cheered by markets.

Europe's vaccination pace remains slow, but coronavirus cases in Germany are showing tentative signs of turning down. Additional developments on both immunization and the virus are eyed.

Outside the US and Europe, China reported an annualized growth rate of 6.5% in the fourth quarter of 2020 – being the only major economy to have grown last year. Demand from the world's second-largest economy is also positive for European goods and adverse for the safe-haven dollar.

US markets are closed on Monday trading volume is set to fall. However, the list of bullish EUR/USD arguments could materialize to gains later in the day. 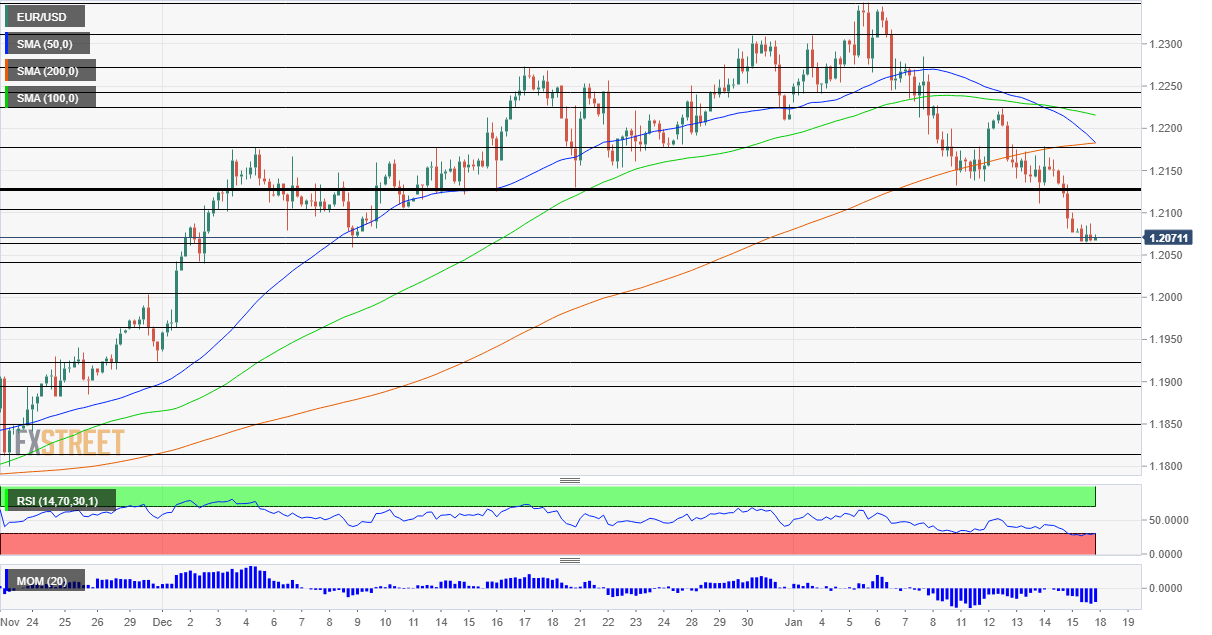 The Relative Strength Index on the four-hour chart is just below 30 – in oversold conditions, implying an upward correction. On the other hand, momentum is still to the downside and EUR/USD trades below the 50, 100 and 200 Simple Moving Averages.