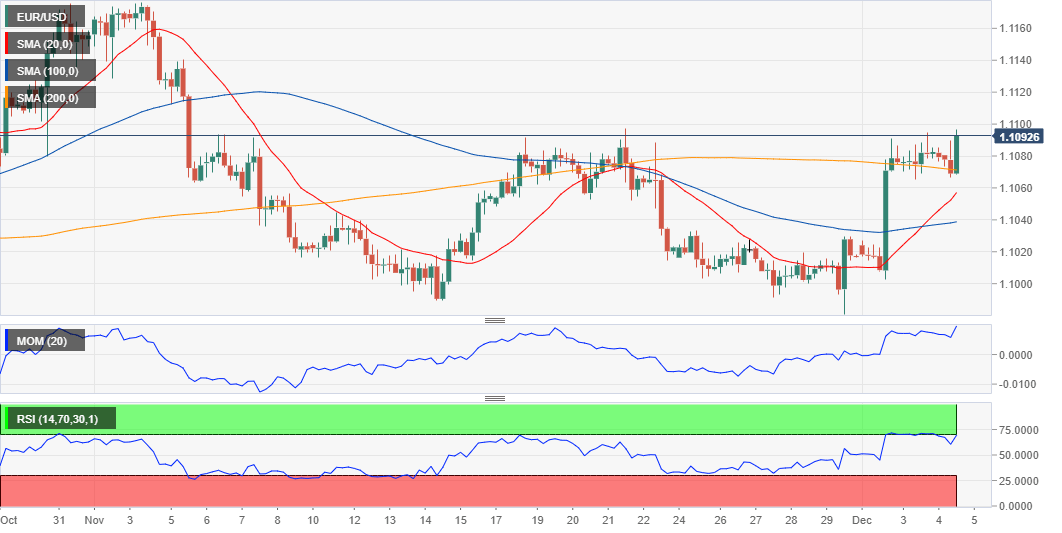 The EUR/USD pair has continued consolidating Monday gains just below the 1.1100 figure throughout the first half of the day, indifferent to data. The focus is on trade developments, as the market’s sentiment oscillates alongside US-China related headlines. There was a spike of optimism mid-London session, following a report indicating that the US and China are moving closer to agreeing on the amount of tariffs that would be rolled back in a phase-one trade deal, although it was short-lived.

In the data front, Markit released the final versions of November Services PMI, which were revised up for Germany, to 51.7 and for the EU to 50.6. In minor economies, however, the indexes were revised lower. In the US, the ADP employment survey showed that the private sector added just 67K new jobs in November, way below the 140K expected, pushing the greenback lower. Still, the market is waiting for the ISM Non-Manufacturing PMI, foreseen in November at 54.5 from the previous 54.7. A disappointing figure will likely send the EUR/USD pair further up.

The EUR/USD pair is poised to extend its advance, after meeting buyers once again around 1.1065, a critical Fibonacci support level. In the 4-hour chart, the pair is extending gains above a directionless 200 SMA, while the 20 SMA advances above the 100 SMA, both below the current level. Technical indicators, in the meantime, resumed their advances after correcting extreme overbought conditions, currently below their previous weekly highs. The 23.6% retracement of the October rally comes at 1.1108, providing immediate resistance. More gains are to be expected on a break above it.