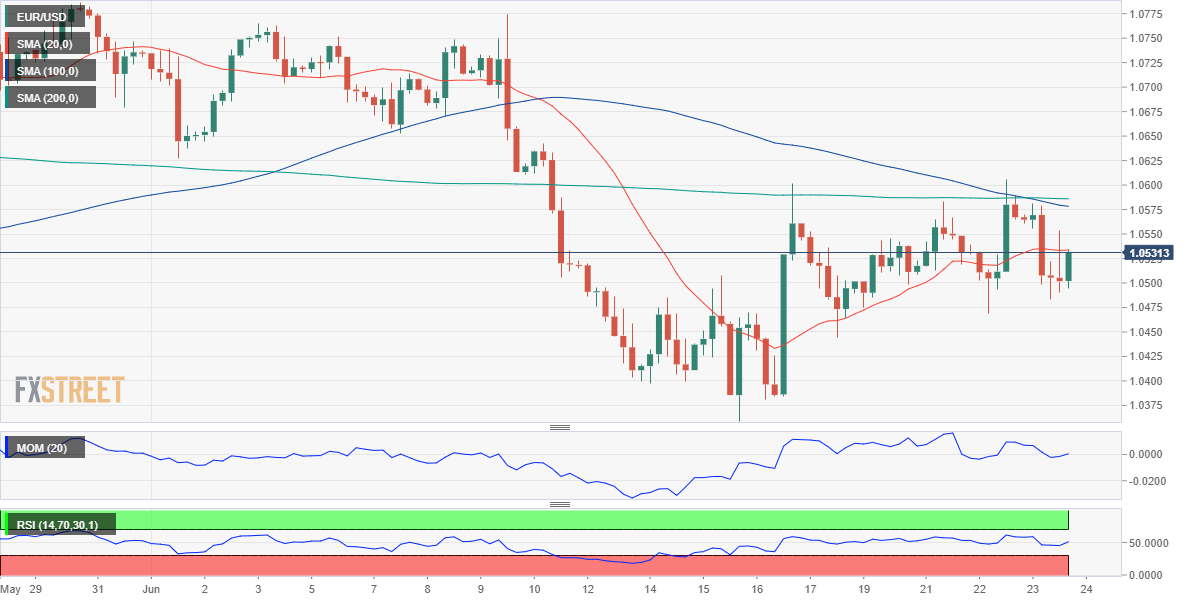 The EUR/USD pair trimmed most of its weekly gains on Thursday, hovering around 1.0530 while heading into the last trading day of the day. The American dollar benefited from a souring mood that weighed on high-yielding assets. The dismal sentiment was triggered by more comments from FOMC’s leader Jerome Powell comments and macroeconomic data pointing to a sharp economic slowdown.

The flash S&P Global PMIs for June painted a gloomy picture as EU economic activity hit a 16-month low, reflecting a stalling of demand growth. The manufacturing PMI contracted to 52, while the services index shank to 52.8 from 56.1 in May.

About Germany, the report showed activity lost momentum at the end of the second quarter while adding that "firms' expectations towards future activity slumped to their lowest since the first wave of the COVID pandemic over two years ago, with manufacturers growing increasingly pessimistic about the outlook." Germany's flash Manufacturing PMI printed at 52, while the services index came in at 52.4.

Finally, the US manufacturing index slowed to 52.4 in June, an almost two-year low, while the Services PMI contracted to 51.6 from 53.4 in the previous month, a five-month low.  The US also published Initial Jobless Claims for the week ended June 17, which rose to 229K, while the Q1 Current Account posted a deficit of $ 291.4 billion, both missing the market's expectations.

On Friday, the macroeconomic calendar will include the final readings of the German Q1 Gross Domestic Product and the June IFO Business Climate survey. On the other hand, the US will release the June Michigan Consumer Sentiment Index and May New Home Sales.

The EUR/USD pair bottomed for the week at 1.0468, while attempts to advance beyond the 1.0600 level were quickly rejected by bears. The daily chart shows that a bearish 20 SMA provides intraday resistance around the 1.0600 level, while the longer moving averages maintain their firmly bearish slopes far above the shorter one. Technical indicators have turned lower within negative levels, in line with further declines ahead.

The 4-hour chart offers a neutral-to-bearish stance, as the pair currently develops below all of its moving averages. The 100 SMA is crossing below the 200 SMA, both in the 1.0570/80 price zone. Technical indicators in the mentioned time frame remain below their midlines, although without clear directional strength.