After a modest pullback on the first day of a new trading week, the EUR/USD pair regained some positive traction on Tuesday and inched back closer to last week's post-NFP swing high to 2-1/2 month tops. A subdued US Dollar demand was seen as one of the key factors benefitting the pair, though weaker Euro-zone investor confidence data kept a lid on any strong follow-through. In fact, the Sentix Investor Confidence index dropped to -3.3 in June from 5.3 previous and indicated that the economy is once again on the threshold of a recession.

From the US, softer-than-expected May Producer Price Index, which rose 1.8% on a yearly basis as compared to 2.0% expected, also did little to impress the USD bulls and remained supportive. Bulls further took cues from the US President Donald Trump's efforts to talk down the domestic currency by saying that the Euro and other currencies are undervalued against the dollar, putting the US at a big disadvantage. Trump also complained that the Fed was keeping interest rates way too high, which added to ridiculous quantitative tightening.

Nevertheless, the pair ended the day with modest gains and held on to its positive tone through the Asian session on Wednesday as market participants now look forward to the ECB President Mario Draghi's scheduled speech for some fresh impetus. Later during the early North-American session, the release of the latest US consumer inflation figures will influence the USD price dynamics and further collaborate towards producing some meaningful trading opportunities.

From a technical perspective, the pair continues to hold comfortably above a five-month-old descending trend-channel resistance breakpoint and hence, remains poised to aim towards challenging the very important 200-day SMA barrier near the 1.1365 region. A follow-through buying has the potential to lift the pair beyond the 1.1400 handle towards testing March swing highs, around mid-1.1400s.

On the flip side, any meaningful pullback below the 1.1300 handle might still be seen as a buying opportunity and hence, should limit the downside by 100-day SMA support near the 1.1275 region. A convincing break below the mentioned support is likely to accelerate the slide towards the 1.12220 intermediate support before the pair eventually drops to test the 1.1200 round figure mark. 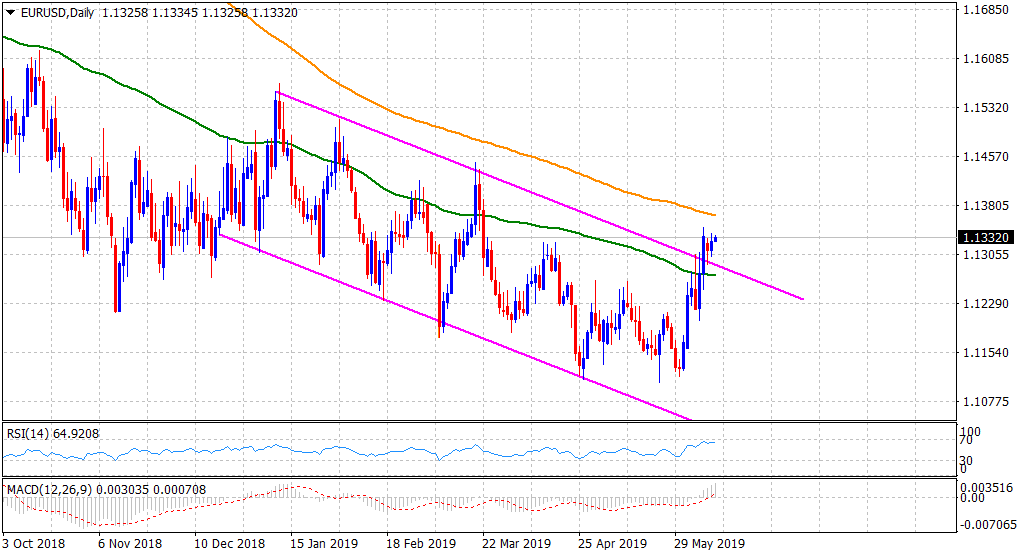