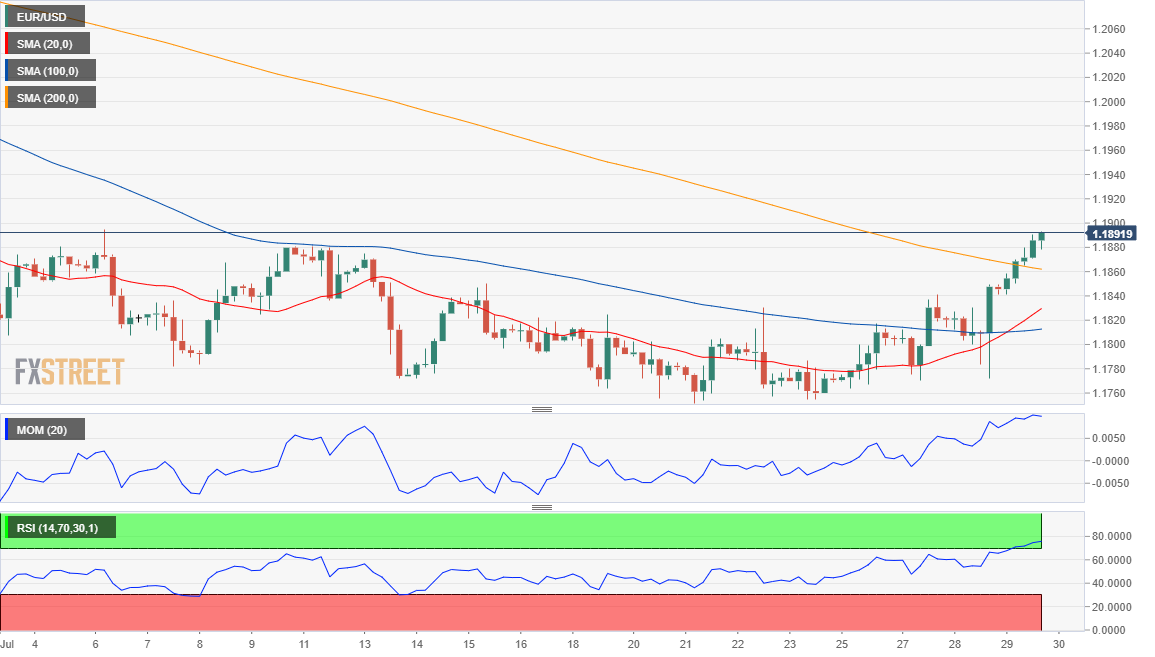 The EUR/USD pair traded as high as 1.1892 on Thursday, ending the day not far below. The American dollar accelerated its post-Fed slump after another round of dismal US data. The country published the preliminary estimate of its Q2 Gross Domestic Product, which showed the economy grew at an annualized pace of 6.5%, better than the previous 6.4%, although missing the 8.6% expected. Also, Initial Jobless Claims for the week ended July 23 printed at 400K, worse than anticipated. Meanwhile, Wall Street rallied, with stocks´ traders relieved after the Fed’s patient stance on tapering.

Germany published the preliminary estimates of July inflation. The annual Consumer Price Index jumped to 3.8%, well above the 3.3% expected. The EU released the July Economic Sentiment Indicator, which improved to 119 from 117.9.  On Friday, Germany will publish the preliminary estimate of Q2 GDP, foreseen at 2% from -1.8% in Q1, while the EU will also publish its Q2 GDP, foreseen at 1.5% from -0.3% previously. Finally, the US will unveil June Personal Income and Personal Spending figures, including core PCE inflation.

The EUR/USD pair trades around the mentioned high and is poised to keep advancing. The main bullish target and the immediate resistance level is 1.1920, the 61.8% retracement of the March/May rally. The 4-hour chart shows that the pair is developing above all of its moving averages, with the 20 SMA crossing above the 100 SMA, reflecting increased buying interest. Technical indicators lost their upward strength after reaching overbought conditions, but with the RSI consolidating around 70, chances of a near-term decline are limited.