The EUR/USD pair managed to find some support just ahead of the key 1.2000 psychological mark and regained positive traction on the first day of a new trading week. The uptick allowed the pair to recover a part of Friday's sharp losses and was sponsored by the emergence of some fresh selling around the US dollar. Expectations that the Fed will keep interest rates near zero levels for a longer period continued acting as a headwind for the USD. Apart from this, the underlying bullish sentiment in the financial markets further undermined the greenback's relative safe-haven status and provided a modest lift to the major.

Bulls further took cues from upbeat German Retail Sales figures, which posted their biggest yearly gains in March since the start of the COVID-19 pandemic. Adding to this, the Eurozone Manufacturing PMI was finalized at a record 62.9 in April. The reading was slightly below the flash estimate but marked the highest level since the survey began in June 1997. In another positive development, the European Commission proposed that Member States lift restrictions on non-essential travel for vaccinated persons travelling into the bloc. This was seen as another factor that extended some support to the shared currency.

Conversely, the ISM Manufacturing PMI missed market expectations and dropped to 60.7 in April, down from the 38-year high level of 64.7 touched in the previous month. The yield on the benchmark 10-year US government bond fell 2.5 bps in reaction to the slowing growth in the US manufacturing sector. This, along with not so optimistic comments by Fed Chair Jerome Powell, saying that the US economy was doing better but was not out of the woods yet, further contributed to the intraday USD selling bias. Nevertheless, the pair rallied over 60 pips from the daily swing lows, albeit struggled to capitalize on the move.

The pair edged lower during the Asian session on Tuesday and was pressured by a goodish pickup in the USD demand. In the absence of any major market-moving economic releases, either from the Eurozone or the US, the USD price dynamics will play a key role in influencing the pair's intraday momentum and allow traders to grab some meaningful opportunities.

From a technical perspective, the pair’s inability to build on the overnight positive move suggests that the recent pullback from two-month tops might still be far from being over. Weakness below the 1.2000 mark will reaffirm the bearish outlook and turn the pair vulnerable to accelerate the fall towards the very important 200-day SMA support, around the 1.1940 region. Some follow-through selling, leading to a subsequent break below the 1.1900 mark should pave the way for a further near-term depreciating move. The pair might then drop to test intermediate support near the 1.1860-50 region en-route the 1.1800 mark and the next relevant support near the 1.1770-65 region.

On the flip side, the 1.2075-80 region now seems to have emerged as immediate resistance. This is closely followed by the 1.2100 mark, which if cleared decisively will negate any negative bias. The next relevant resistance is pegged near mid-1.2100s, above which the pair is likely to reclaim the 1.2200 mark. The upward trajectory could further get extended towards February monthly swing highs, around the 1.2245 region. 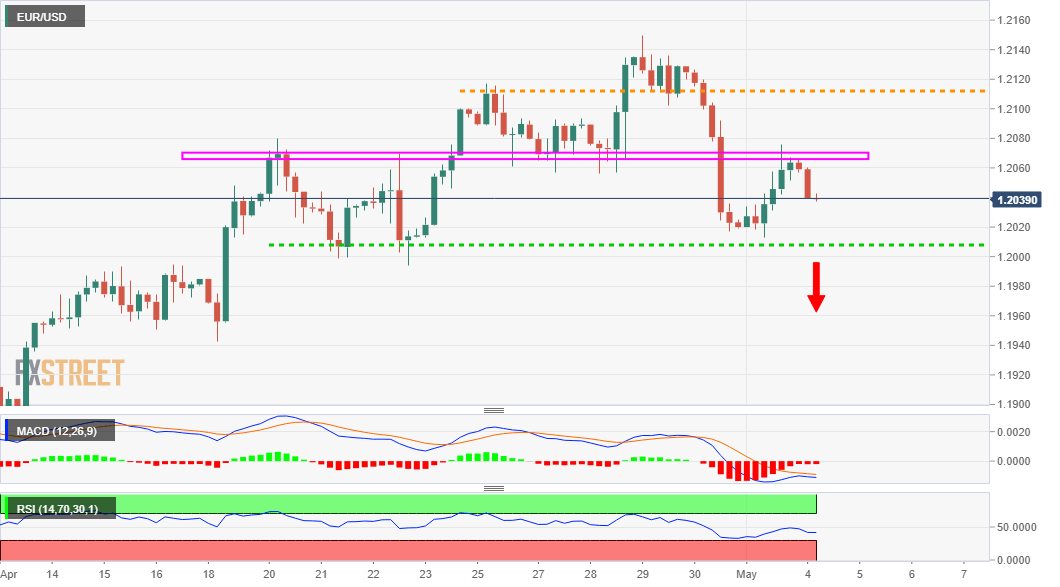