The EUR/USD spiked higher in the light of the weakened US dollar and the strong EU inflation data. This month, eurozone inflation soared to its highest level on the back of surging energy prices, likely reaching its peak just before a slow decline that will keep it up for the foreseeable future.

Consumer price inflation in the 19 euro-area countries increased to 4.9% in November, accelerating from 4.1% a month earlier and exceeding expectations of 4.5%. It was the highest rate in 25 years since the figure has been gathered.

The price of energy rose by 27% compared to a year earlier as oil prices spiked. However, prices of services and industrial goods other than energy were up over 2%, suggesting underlying price pressures have increased.

However, the ECB has long argued that the inflation surge is temporary, caused by various one-time factors, and is not likely to take any policy action due to this inflation surge.

With broad-based selling pressure surrounding the greenback, EUR/USD gained traction and climbed to its highest level in near two weeks, above the 1.1360 hurdles. While the yield on 10-year Treasury notes fluctuated close to Friday's lows as investors held on to bets that the Federal Reserve would reconsider hiking rates amid concerns about the impact of the Omicron variant on the recovery.

While the yield on two-year bonds has been unchanged since last week's holiday-shortened session, rates on longer-term securities are only a few basis points higher.

According to Fed futures, the first-rate hike could happen as late as September next year, unlike last Wednesday, when traders were pricing in June.

After sinking toward its 17-month record low last week, EURUSD has recovered near its two-week high of 1.1370 around the former downtrend line. Although the single currency struggles the 100-exponential moving average (EMA), completing the inverse head-and-shoulders pattern earlier in the day suggests positive momentum is prevailing. Should buyers overstep the flattening 100-EMA, immediate resistance is seen at the 1.14 mark. A further push in the direction of the latter would possibly encourage bulls to keep 1.1480 in their sights.

The short-term oscillators are suggesting that buyers may take a breather as RSI is hovering in overbought territory. 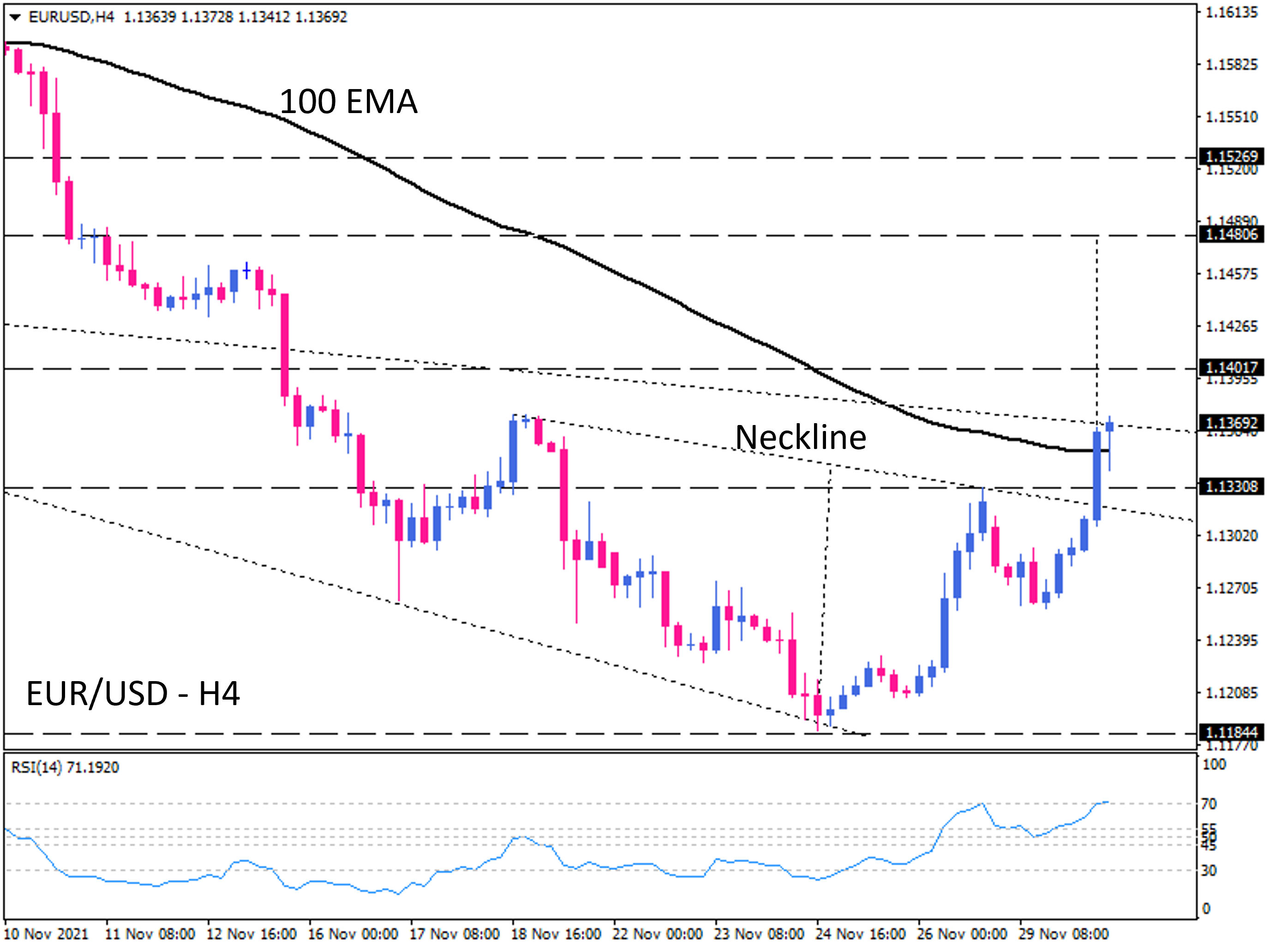 Events of the day

Jerome Powell, the chair of the Federal Reserve, said that the spread of Omicron challenges the central bank's objectives of full employment and stable prices. He argued the Fed will delay tightening monetary policy if the spread of the virus inhibits the labor market's recovery.

Investors are looking for further clues as Yellen and Powell are scheduled to speak before the Senate Banking Committee on Tuesday and before the House on Wednesday.

Investors also await the latest CB Consumer Confidence data to release later today, which is expected to slip to 111 in November from 113.8 in the previous month.

China's November manufacturing and non-manufacturing PMIs were released this morning. Over the weekend, the manufacturing PMI rose marginally to 50.1, which follows a sharp rise in Industrial Profits, with metals refining and energy leading the charge.

However, the data suggests China is not out of trouble yet. PMI for non-manufacturing stayed unchanged at 52.3, with COVID-19 restrictions potentially being offset by Singles Day. In general, the PMI rose sharply from 50.8 to 52.2, and this suggests an improvement because of easing power constraints in China and loosening lending criteria for the real estate sector.

Trading forex and other financial instruments involve a high level of risk and may not be suitable for all investors or traders. Traders must carefully consider their trading objectives, financial situation, risk appetite, and level of experience before stepping into margin trading with Inveslo. There's a risk of losing more than the trader’s initial investment. The higher the leverage, the more the risk, which can go or against you. Traders are advised to be aware of the associated risks.