EURUSD has broken the resistance level of 1.2000 on December the 1st, reaching new swing highs of 1.2134 during Thursday’s trading session. 1.2000 levels, last seen in April 2018, had been an important resistance and tested a number of times since August 2020. This price action confirms the prevailing risk-on sentiment that has been dominating the markets since the U.S. election outcomeand since Pfizer’s announcementabout their high efficacy vaccine in early November.

The strength in EUR can be explained by a number of narratives. Firstly, Biden’s pro-European policies are expected to be beneficial for European assets and companies as Biden is expected to eliminate the tariffs on European goods. Also, Biden being supporter of strong transatlanticrelationsis likely to reengage with U.S. partners in Europe on a number of fronts, including security and defense, sanctions and multilateral initiatives.

Secondly, anemic inflation out of the Euro Area is becoming chronic with CPI data hovering around 0% since late April, despite the stimulus flooding in from the ECB. As of November 2020, the ECB held assets worth of around 60% of Euro Area GDP on their balance sheet. The ECB is expected to announce further easing during their meeting on 10 December. The message has been clear from a number of officials– Euro Area is witnessing sharper slowdowns in growth momentum and weakening in fundamentals. This is partially due to the second wave of COVID-19 in member states that has warranted lockdowns and restrictions on movement. The most affluent group of population – the Baby Boomers – is self-isolating and hence spending has suffered. Consumer confidence in Euro Area dropped to -17.6 in November, from -15.5 a month earlier. The ECB’s message about recalibrating the monetary policy instruments has been upfront and most likely we will see expansion of PEPP (Pandemic Emergency Purchase Programme), as well as TLTRO (Targeted Longer-Term Refinancing Operations) with durations pushed out. These measures can put downward pressure on EURUSD, forcing the pair back to range of 1.1760 to 1.1940 that has been prevailing since late July.

Additionally, bipartisan group of lawmakers in the U.S. have put forward an additional stimulus bill of US$ 908 billion. This is on top of existing stimulus of US$ 3.5 trillion, albeit not all of it has been used and Treasury Secretary Mnuchin has asked Fed to return US$ 455 billion of unused funds by the end of 2020. The support from the ECB stands at around EUR 1.35 trillion, or US$ 1.63 trillion. In terms of percentage total monetary base has increased by 46% in Europe and by 43% in the U.S. during 2020 but the Fed’s deep pockets combined with bipartisan bill for fiscal stimulus might depreciate USD further.

Technicalsfor EURUSD pair support strong short- and long-term bullish momentum as moving averages are stacked (8 > 21 > 34 > 50 > 100 > 200), while DMI+ sits near 30.0 levels and ADX is 22.3 and increasing. 14-day RSI is overbought at 72.2 and Stochastic near 91.2 also signals potentially overbought price point. Also, the price has broken though upper Bollinger Band resistance of 1.2087, indicating that a potential pullback may be due. 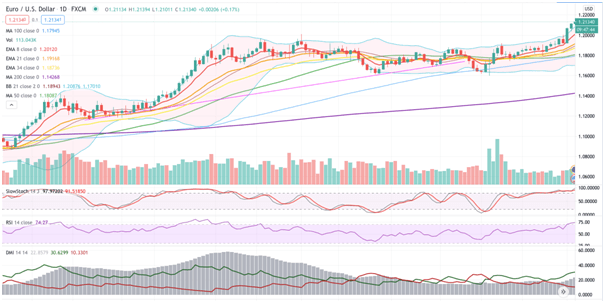