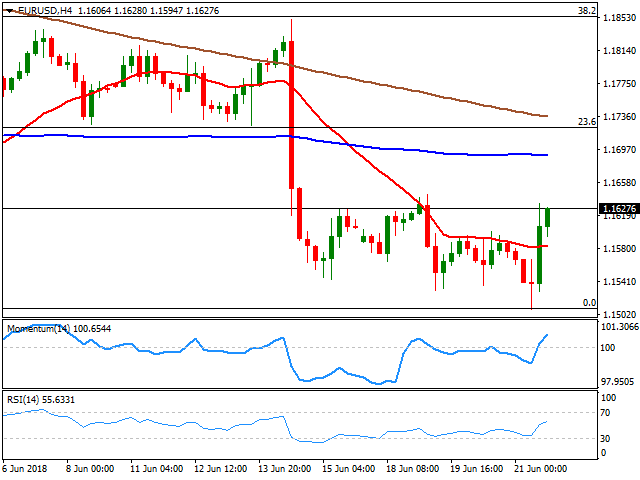 The EUR/USD pair reached a fresh yearly low, hitting 1.1507 early Europe as an escalating trade war that triggered retaliation from several major economies fuel risk aversion in detriment of the EUR. Adding pressure on the common currency, Italy appointed Alberto Bagnai as Senate Finance Committee head, a well known eurosceptic. The pair began bouncing after the BOE's hawkish surprise that open doors for a rate hike next August, with the recovery later fueled by soft US data, and a decision of the US Supreme Court that allows states to require online-sales tax collection.

Equities plunged in Europe and the US after news indicating that following Wednesday's EU decision to impose tariffs on US imports as soon as this Friday, the Turkish government joined the retaliation train by imposing tariffs of $266.5 million on $1.1 billion worth of US goods. In the US, weekly unemployment claims resulted at 218K for the week ended June 15 better than the 220K expected, although the Philadelphia Fed Manufacturing Survey came in at 19.9 for June, well below the previous 34.4 or the expected 29.0. Euro's rally stalled after the Union's June preliminary consumer confidence plunged to -0.5, its lowest since last October. June preliminary Markit PMI for the EU and the US will be out this Friday, helping to finish the week on a high note.

Technically, the pair is not yet out of the woods despite the latest recovery to the current 1.1600 region, but the fact that it bounced strongly from the yearly low may suggest that the upward corrective movement could continue, exacerbated by profit-taking ahead of the weekend. In the 4 hour chart, the pair settled above a horizontal 20 SMA, some 20 pips above the indicator for the first time in almost two weeks. Technical indicators in the mentioned chart have entered positive territory, maintaining their upward momentum, with the RSI partially losing its upward strength but at around 55, indicating persistent buying interest. The weekly high at 1.1644 is the key resistance level to surpass to favor an upward continuation during the upcoming session up to 1.1720, a Fibonacci resistance.