The market kept buying the greenback for a second consecutive week, pushing the EUR/USD pair to a fresh year low of 1.0568 on Friday. Demand for dollar assets, triggered by Trump´s victory and hopes his growth policies will send inflation higher, sent the dollar index to its highest close since 2003, up 2.15% for the week at 101.32. FED's Chair, Janet Yellen, said this past week that a rate hike could take place "relatively soon,"  fueling dollar's rally, alongside with positive local data, including the CPI that rose in October by 0.5% from a year earlier, at the fastest rate of growth in two years, whilst weekly unemployment claims fell to 235K, the lowest reading since November 1973. 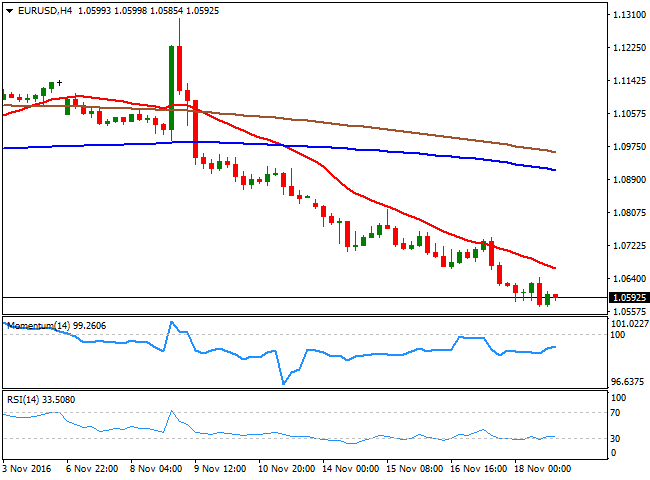 Still, the movement seems quite overstretched, as the EUR/USD pair has fallen for ten days in-a-row, as a December hike has been fully priced in. A corrective movement should not be dismissed, although is yet to be seen if that could be enough to revert the dominant bearish trend. Technically, the daily chart shows that indicators maintain the strong bearish strength, despite being in extreme oversold territory, suggesting the pair may extend its slide, down to 1.0505 first, December 2015 monthly low, and 1.0460 later, the lowest for 2015. In the 4  hours chart, a bearish 20 SMA has been steadily rejecting advances for the last two weeks, while technical indicators are consolidating within negative territory, supporting a downward extension on a break below 1.0560, the immediate support.

Cardano price continues to confuse forecasts ADA teeters between two clearly defined technical levels. Until the Ethereum-killer can overcome the two key areas of resistance, the token can expect a 23% climb toward $2.73.