A combination of supporting factors pushed the EUR/USD pair beyond the 1.2200 mark for the first time since 2018. The shared currency got a strong lift on Wednesday after a report showed that the manufacturing sector activity expanded faster than estimated and the services sector contracted less than anticipated. The data added to the optimism that the region's economy is beginning to stabilize and that the recovery is gaining traction. The momentum was further supported by a broad-based US dollar weakness amid the prevalent upbeat market mood.

The global risk sentiment remained well supported by the recent positive news about the rollout of vaccines for the highly contagious coronavirus disease, hopes for a Brexit deal and prospects for additional US stimulus. Republicans and Democrats in the US Congress were reportedly on the brink of an agreement on a $908 billion COVID-19 relief package ahead of Friday's looming deadline. The greenback failed to gain any respite and remained depressed following the disappointing release of the US monthly Retail Sales figures for November.

The bearish pressure surrounding the USD remained unabated after the Fed said that it will continue to support the economy through massive monetary stimulus. At the final meeting of the year, the US central bank vowed to keep pouring cash into the financial markets until the US economic recovery is secure. The clear message that the Fed is willing to do more if needed did little to lend any support to the greenback or stall the ongoing downfall. This, in turn, allowed the pair to continue scaling higher through the Asian session on Thursday.

The pair shot to fresh two-and-half-year tops as market participants now look forward to the release of final Eurozone CPI print for a fresh impetus. The US economic docket highlights the releases of the Philly Fed Manufacturing Index, Initial Weekly Jobless Claims and housing market data – Building Permits and Housing Starts. The data, however, is unlikely to be a major game-changer for the USD and hence, the path of least resistance for the pair remains to the upside.

From a technical perspective, the overnight breakthrough the 1.2175-80 horizontal resistance was seen as a fresh trigger for bullish traders. That said, technical indicators on the daily chart are already flashing overbought conditions and warrant some near-term consolidation or a modest pullback before the next leg up. Nevertheless, the pair still seems poised to prolong its bullish trajectory and aim to reclaim the 1.2300 round-figure mark. Some follow-through buying should pave the way for additional gains, though the momentum could pause near the 1.2340-50 region.

On the flip side, the 1.2200 round-figure mark now seems to protect the immediate downside and is closely followed by the 1.2180-75 resistance breakpoint. Failure to defend the mentioned support levels might prompt some technical selling. However, any subsequent fall might still be seen as a buying opportunity near the 1.2130 region, which marks 200-hour SMA and should now act as a strong near-term base for the major. 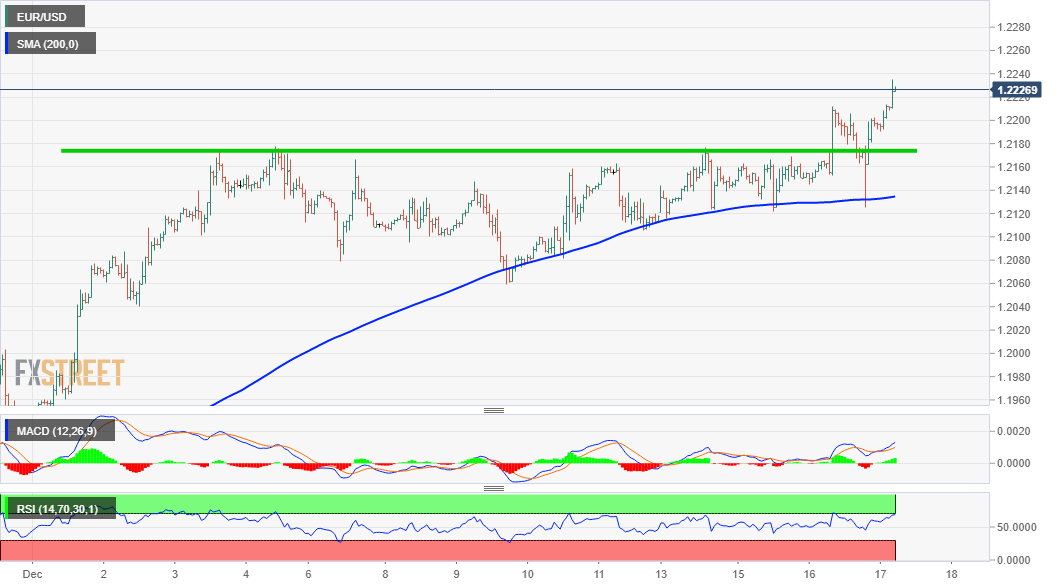