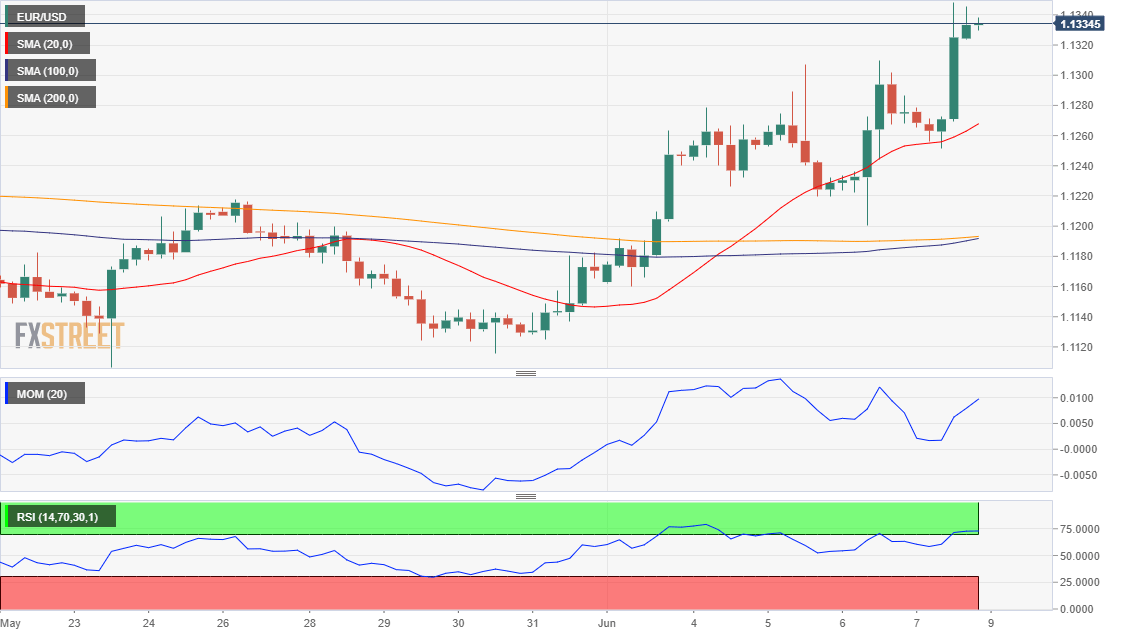 The EUR/USD pair soared to 1.1347 last Friday, as a dismal US employment report fueled speculation of an upcoming rate cut in the US, pressuring further the greenback. According to official data, the US economy added 75K new jobs in May, well below the 185K expected, while April figure was downwardly revised to 224K vs. the previous estimate of 263K. The unemployment rate held steady at 3.6%, with the labor force also unchanged at 62.8%, despite an uptick expected. Wages grew by 0.2% MoM and by 3.1% YoY, both within the recent levels, although below the market's forecast. Less relevant yet still concerning, April Wholesale Inventories were up 0.8%. Data supported fears of slowing economic growth, as jobs' creation is the second lowest in almost two years. The shared currency rose despite earlier in the day, German data disappointed, with Industrial Production falling 1.9% in the month, and by 1.8% when compared to a year earlier.

The market has already digested that talks between China and the US collapsed, and news in that front are expected by the ends of June, within the G-20 meeting that will take place in Japan. But it is still to react to US President Trump's announcement late Friday. Trump tweeted that the US reached an agreement with Mexico, therefore suspending tariffs indefinitely. Monday will be a holiday in several European countries, with no relevant data scheduled in the Union, while the US will only release April JOLTS Job Opening.

The EUR/USD pair settled around 1.1330, bullish according to the daily chart, as it advanced above its 100 DMA for the first time since mid-March, with the 200 DMA in the 1.1360 region providing an immediate dynamic resistance. Technical indicators in the mentioned chart head sharply higher within positive levels, and near overbought readings, skewing the risk to the upside. Moreover, the pair broke above a daily descendant trend line coming from September 2018 monthly high, with bulls hardly giving up as long as the price remains above it. Shorter term, and according to the 4 hours chart, the pair is also poised to extend its gains, as it bounced from a bullish 20 SMA, now a few pips below the broken trend line, while technical indicators remain near their recent highs, having lost part of their bullish strength.

Gold has extended its run claiming two more targets at 1630.00 and 1640.85 towards the end of last week's session an increase of approximately 4% in the week's trading session. I think gold prices have entered a new trend.