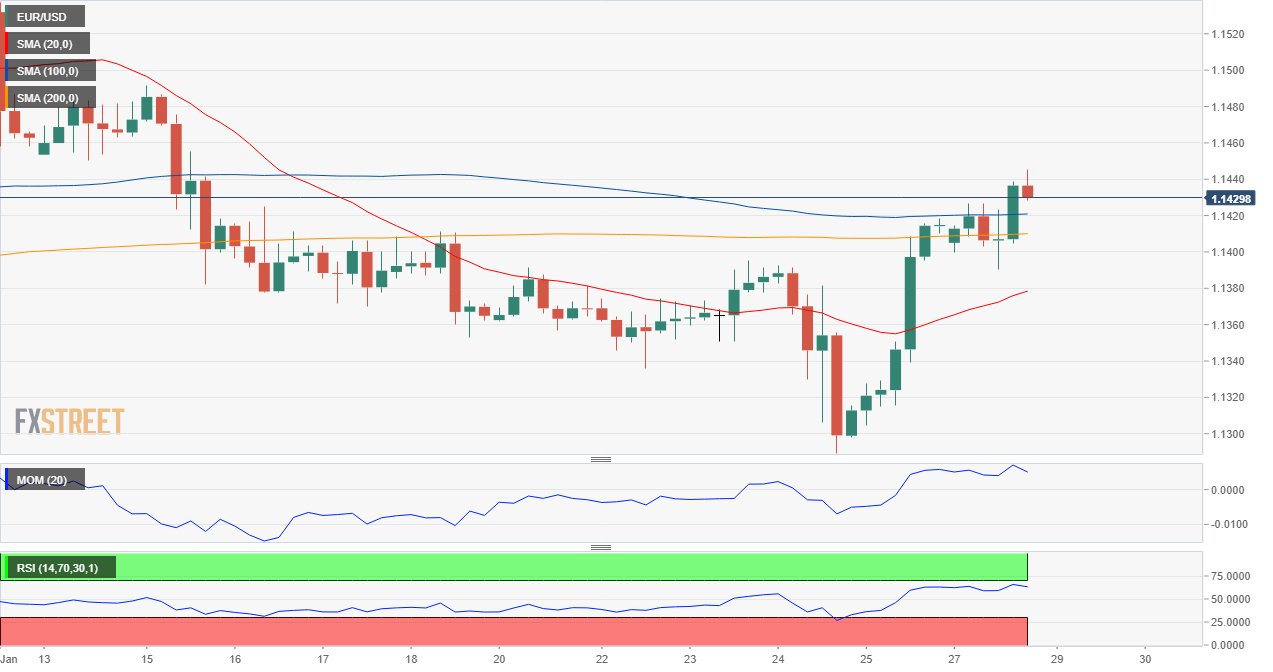 The American currency extended its decline against its European rival this Monday, unable to benefit from dominant risk aversion amid speculation that the Fed will also pause in shrinking its balance sheet. The dismal mood was triggered by a report indicating that Chinese industrial earnings shrank for a second consecutive month in December, adding to the ruling fears of an economic slowdown in the world's second-largest economy. Worldwide indexes fell, following below expected earnings reports from big names, which also blame their poor results on Chinese downturn. The EUR/USD pair rose to 1.1443, little affected by ECB's head, Draghi, testimony before the European Parliament, as he repeated the usual caveats about economic developments in the Union.  The macroeconomic calendar offered nothing of interest, with minor data both shores of the Atlantic passing unnoticed. This Tuesday, there's nothing for the EU to take care of, while, despite the US government re-opened, there's neither relevant data scheduled in the US, only the CB Consumer confidence index for January, previously at 128.1.

The EUR/USD pair trades around 1.1430 ahead of the Asian opening, offering a bullish stance in its 4 hours chart, as it not only advanced above the 50% retracement of its  January decline between 1.1569 and 1.1288 at 1.1428 but also above all of its moving averages in the mentioned chart, as technical indicators maintain firm upward slopes near overbought territory. The pair has a strong static resistance at 1.1460, while the 61.8% retracement of the mentioned decline comes at 1.1462, reinforcing the relevance of the resistance. Gains beyond it could trip stops and see the pair extending its gains up to the mentioned monthly high. The downside will remain limited as long as the price holds above 1.1380.

AUD/USD: Corrective advance intact while above 0.7065

AUD/USD stalls its corrective bounce just shy of the 0.71 barrier, as the bulls take a breather before the next push higher. The spot is holding above the critical support at 0.7065 amid the upbeat market mood-driven reduced haven demand for the US dollar.

USD/JPY finally about to make the U-turn to 103s?

USD/JPY is under pressure as the US dollar is broadly sold off across the board. DXY has been telegraphing a downside correction for a number of days. Meanwhile, there has been a couple of domestic releases for the yen with the Bank of Japan Summary of Opinions.

Gold bulls catch a breather below $1,900

GBP crosses catching a bid in Asia on Brexit hopes

There have been a series of news relating to Brexit and monetary policy to start the week which has been underpinning the pound. The latest news, reported by the Times, states that the ''European negotiators have indicated for ...