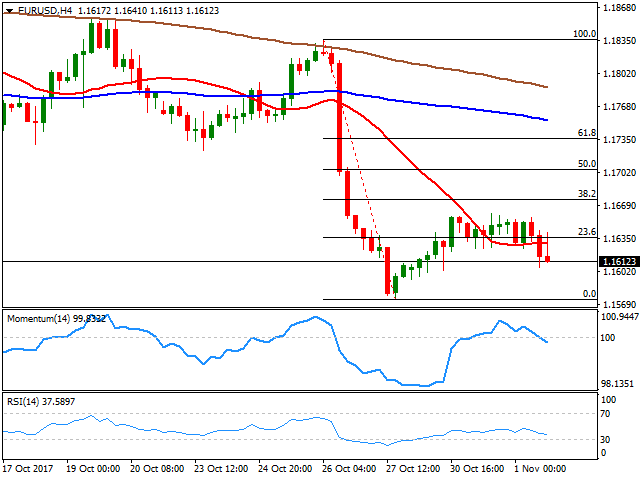 The EUR/USD pair closed the day lower, but still within its weekly range as US data indicated strong economic growth. The US Federal Reserve had a monetary policy meeting, but market's reaction was quite limited, as the Central Bank left interest rates unchanged, remarking in the accompanying statement that the US economy is "solid," despite inflation "remained soft" and is likely to remain so in the short run. The news didn't change market's conviction that a rate hike will come in December.

A partial holiday in Europe kept the macroeconomic empty, although local equities soared, undermining the common currency. In the US, economic news were mostly positive, as the ADP report beat expectations, indicating that the private sector added 235K new jobs in October, also surpassing September revised figure of 110K.  The final October Markit manufacturing PMI came in at 54.6, beating previous estimate of 54.5, marking the fastest pace of improvement in nine months. The official ISM manufacturing PMI, also showed economic expansion, although the index came in at 58.7 for the same month, a decrease of 2.1 percentage points from September 60.8. Attention now shifts to BOE's decision, expected to have little influence on the pair, and Trump's decision on next Fed's head, both to take place this Thursday.

Technically, the pair is gaining bearish strength short-term, as it is closing the day below the 1.1630 price zone, where it has the 23.6% retracement of its latest daily decline, and its 20 SMA in the 4 hours chart. Technical indicators in the mentioned time frame head lower within bearish territory, with the price now posed to test October low of 1.1575, below the level, there's little in the way towards 1.1460, the strong static resistance that capped advances all through 2015 and 2016. Nevertheless, further dollar's gains will depend on how the market takes Trump's announcement.