The EUR/USD pair recovered some ground this Tuesday, ending the day marginally higher at 1.1655, but not before setting a fresh almost 2-year high of 1.1711. A bout of dollar selling took place ahead the US opening, with no certain catalyst behind the move, yet as usual, data coming from Europe was stronger-than-expected, whilst in the US, macroeconomic releases were mixed, once again with numbers below expected. Early Europe, the release of the German IFO survey showed that local business confidence rose in July to a new record high, with the index reaching 116.0 from 115.2 in June, reflecting the strong momentum in the local economy. In the US, house prices rose in May by less than expected, rising by 5.7% when compared to a year earlier, although the Richmond manufacturing index rose from 7 to 14 in July. 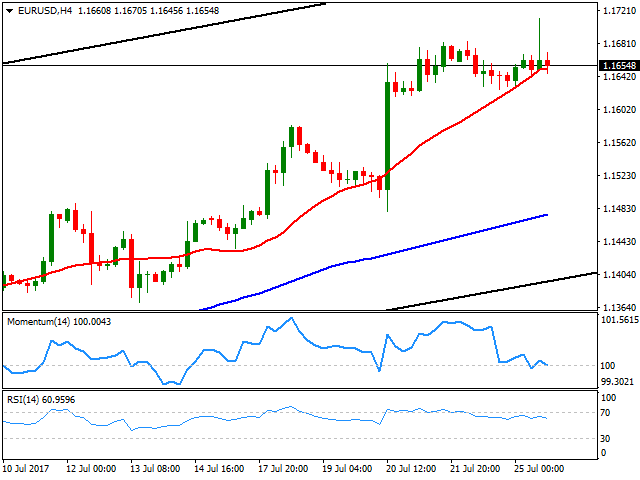 The retracement from the mentioned high was a consequence of profit taking as the Fed looms, rather than diminishing buying interest around the pair, as despite the US Federal Reserve is expected to keep its monetary policy unchanged, it could make some sort of announcement, particularly related to reducing the balance sheet.

Anyway, and from a technical point of view, the bullish trend prevails, with the EUR/USD pair developing within an ascendant channel, coming from mid April, although in the short term, the stance is neutral, as the price barely holds above a bullish 20 SMA, whilst technical indicators lose upward momentum within positive territory. The 2015 yearly high was 1.1713, and a break above the level could see the pair approaching to the 1.1800 figure, where the pair has the 200 SMA in the weekly chart, and the top of the current bullish channel.