Global stocks inched lower on Friday after China Evergrand missed an $83.5 million bond payment. According to Reuters, the company’s bondholders did not receive any payments from the company. Therefore, there are concerns over whether the company can continue and the implications of its collapse. It still has about 30 days before any failure to pay the funds are declared a default. In Asia, its stock collapsed by more than 10%. In Europe, the DAX index declined by 0.80% while the FTSE 100 and CAC 40 declined by 0.35% and 1%, respectively. Elsewhere, in the United States, futures tied to the Dow Jones and S&P 500 indices declined by 0.28% and 0.40%, respectively.

The euro declined slightly against the US dollar after the relatively weak German business climate and current assessment data. The numbers by Ifo Institute showed that the country’s business climate declined from 99.6 in August to 98.8 in September. In the same period, the country’s current assessment fell from 101.4 to 100.4. These numbers show that the new Delta variant wave is having a negative impact on the country. Meanwhile, the market is also anticipating the upcoming German election that will take place on Sunday.

The New Zealand dollar declined slightly after relatively mixed trade numbers from the country. The numbers revealed that New Zealand’s exports declined from more than N$5.77 billion in July to N$4.35 billion in August as the country dealt with the new Covid wave. In the same period, the country’s imports rose from more than n$6.17 billion to more than n$6.49 billion. As a result, the trade deficit widened to more than n$2.14 billion. Elsewhere, cryptocurrency prices slipped after the China Central Bank vowed to intensify its crackdown on cryptocurrency trading.

The ETHUSD pair declined sharply after new warnings from the People’s Bank of China (PBOC). The pair declined to a low of 2,872, which was lower than the intraday high of 3,175. On the four-hour chart, the pair has moved slightly below the 25-day moving average. The MACD has also declined below the neutral line. Therefore, the pair will likely keep falling as bears target the next key support at 2,637. 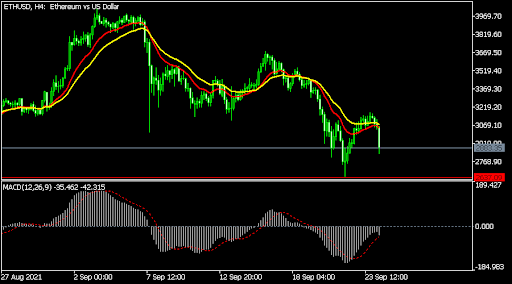 The EURUSD pair declined slightly after the latest German sentiment numbers. It is trading at 1.1730, which is a few points below this week’s high of 1.1750. On the four-hour chart, it is slightly below the upper side of the descending channel. It has also moved below the 25-day moving average while the MACD has started rising. Therefore, the pair will likely finish the week between the channel as traders wait for the German election. 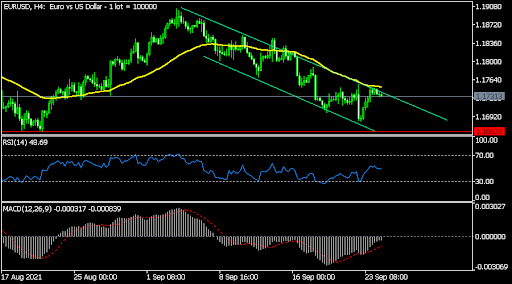 The GBPUSD pair declined slightly after the impact of the BOE decision started waning. The pair declined from the intraday high of 1.3753 to a low of 1.3700. On the four-hour chart, the pair has formed a bullish consolidation pattern and found support at the 25-day MA. Therefore, there is a likelihood that the pair will rebound in the American session. 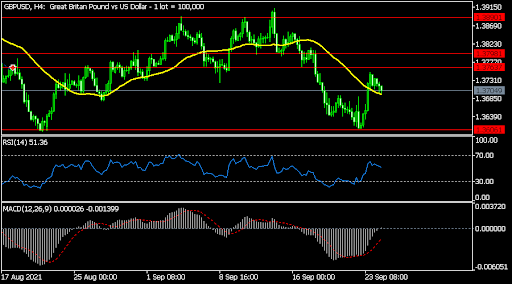