Currency liquidity in Egypt continues to deteriorate at a rapid pace. The banking sector’s net foreign assets (commercial banks and the central bank) are deeply negative (USD -16.6 billion in May 2022) and significantly exceed the lowest level reached during the 2016 crisis (USD -13.8 billion in October 2016). This deterioration comes as no surprise and the effects of the war in Ukraine on commodity prices have only exacerbated a pre-existing trend. Given a large recurring current account deficit (at least USD 20 billion this year) and significant external debt repayments (around USD 9 billion over a whole year), the Egyptian economy relies heavily on volatile portfolio investments. 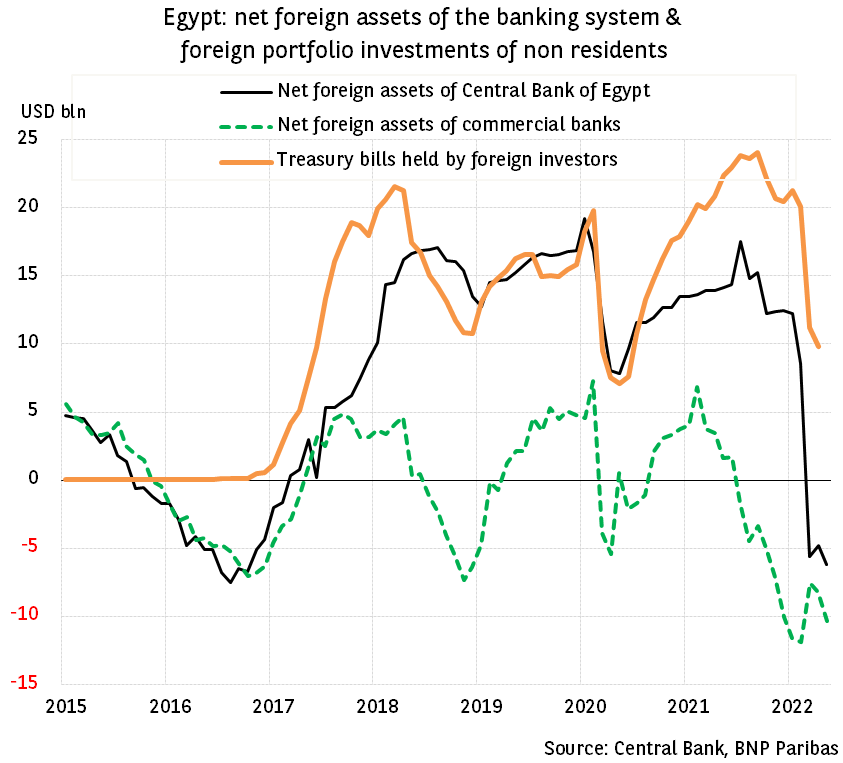 Since the third quarter of 2021, foreign investors have become more averse to Egyptian risk owing to the deterioration of the current account. It has resulted in a sharp rise in the cost of foreign currency debt and a fall in foreign investment in the local debt market. The start of the conflict in Ukraine has sharply increased the price of certain commodities (such as grain) of which Egypt is a major importer and has riggered a sell-off  from foreign investors.

Against this backdrop, the financial support from Gulf countries in the form of deposits with the central bank (USD 5 billion from Saudi Arabia) and the investment in local companies (USD 1.8 billion from an Abu Dhabi sovereign fund), as well as the depreciation of the Egyptian pound by around 15% last March have not stopped the deterioration of external liquidity. While the situation remains sustainable in the short term (the central bank’s gross foreign exchange reserves remain equivalent to around five months of goods and services imports), further external support is essential to avoid uncontrolled depreciation of the pound. Negotiations are currently under way with the IMF for a new financing programme (as the country did in 2016 and 2020). Gulf countries have committed to renewing their support, but in the form of direct or portfolio investments, and the timing of which remains to be confirmed.

The AUD/USD pair has sensed buying interest from 0.6400 and is marching higher gradually in early Tokyo. The aussie bulls have attempted a rebound despite the stability of the risk-off impulse in the market.

EUR/USD: Price balancing on a tightrope over the abyss ahead of NFP

EUR/USD was sold off on Thursday as investors get set for the outcome of Friday's key US event in Nonfarm Payrolls. US yields and the US dollar both rallied as investors dial back the sentiment surrounding a picot from the Federal Reserve.

Gold price has slipped modestly after facing barricades of around $1,715.00 in the Tokyo session. The precious metal is expected to slip further to near $1,700.00 as yields are hovering at elevated levels amid hawkish commentaries from Fed.

The crypto industry has been in the crosshair of many environmentalists as the process of transaction verification and block generation tend to be power-consuming. Despite a 21% rise, MATIC continues to tread below the uptrend support line.

No pain, no gain – this gym idiom resonates with stock bulls. The Federal Reserve has said it is willing to accept – and even wants to see – economic pain to see inflation falling. Last month was painful in financial markets, but did American employment also feel the pinch?