A Wall Street survey of economists in June 2016 suggests there is a 21% chance of recession in the next year.

Given that economists have never once predicted a recession in advance, 21% is a high percentage actually.

Hiring is slowing, auto sales are slipping and business investment is dropping. America’s factories remain weak and corporate profits are under pressure. All are classic signs of an economic downturn, and forecasters have certainly noticed. In a Wall Street Journal survey this month, economists pegged the probability of a recession starting within the next year at 21%, up from just 10% a year earlier. Some economists think the risk is even higher.

Signs of trouble extend beyond the job market. J.P. Morgan Chase economists have been gauging the odds of a recession using a model that incorporates an array of economic indicators, from business-sentiment gauges to auto sales.

As of last week, the model signaled a 34% chance of a recession within 12 months. That was down a bit from 36% earlier in the month but up from 21% back in January. Similar increases preceded the past three recessions.

There’s no foolproof tell of a coming recession. Data lags and revisions mean downturns can be difficult to identify even after they start. And rising worry doesn’t always pan out.

The recession odds spiked to 33% in September 2011, as tracked by the Journal’s survey of private forecasters. But the economy emerged more or less unscathed from a stretch of weaker hiring, political brinkmanship and financial-market turbulence.

A strong case can be made that the expansion is likely to remain on track this time, too.

Business leaders aren’t panicking. The Business Roundtable last week said U.S. chief executives have boosted their expectations for capital expenditures, hiring and sales in the coming months. Executives “don’t see an end” to the expansion, Caterpillar Inc. Chief Executive Doug Oberhelman said. “I think, for the most part, people believe that we can stumble along at 2% for a while longer if there’s not some big event from the outside.” 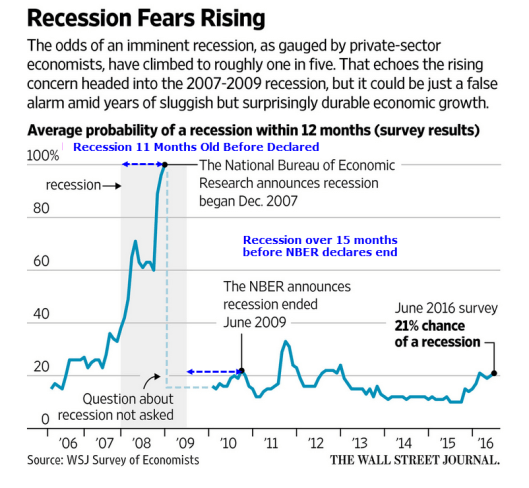 Don’t count on any leeway.