A dose of green hope just after Blue Monday? The holiday season is already far behind – but the old continent could be enjoying two positive green developments. Nevertheless, it is still an open question if Christine Lagarde, the relatively new president of the European Central Bank, will focus on these positives or rather paint a gloomy picture.

Here are three scenarios, all with potential euro impact and their probabilities.

A manufacturing slump – mostly stemming from falling German export growth to China – gripped markets during 2019. The "locomotive" of the eurozone flirted with recession while consumers kept it afloat. The fear was that a weak industry would drag the services sector down.

More importantly, the reason for the downturn may now be ending. The US and China signed Phase One of the trade deal, allowing the global economy to breathe more calmly.

The most recent economic indicators served as "green shoots" – encouraging signs of a comeback. Shoppers have been steady and the German ZEW Economic Sentiment gauge has extended its gains, reflecting a return to optimism. The worst scenarios have been avoided, 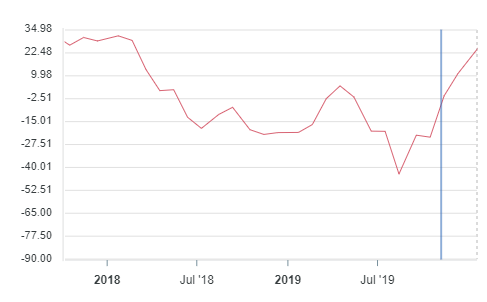 Most importantly for the ECB – inflation has stabilized and even risen. The meeting minutes from the bank's December gathering noted indications of rises in core consumer prices.

At 1.3%, underlying prices are matching the highest levels since 2013: 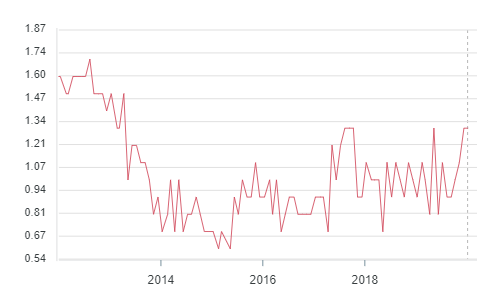 If Lagarde focuses on these signs and sees a glass half full – or half green – the euro has room to rise.

The Frankfurt-based institution has been calling on governments to spend more and stimulate the economy. Former president Mario Draghi said that the ECB is "the only game in town." His successor Lagarde repeated the same message in her inaugural meeting.

While Germany remains reluctant to open its purse strings, enhanced spending at the European level is on the cards.

Ursula von der Leyen, the new President of the European Commission, presented Brussels' "Green Deal" with a total budget of €1 trillion. While part of the budget would come from the private sector, the ambitious goal of becoming carbon-neutral by 2050 implies massive spending.

If the ECB sees the Green Deal as a meaningful fiscal step forward, it could take one step back – thus boosting the euro.

High probability: While the bank is unlikely to send an "all-clear" message, it will find it hard to ignore these two positive developments.

2) Focusing on the darkside – EUR/USD down

The green shoots and the green deal are only one side of the equation. Despite the recovery, Markit's forward-looking Purchasing Managers' Index for the manufacturing sector is still below 50 – indicating ongoing contraction.

German Manufacturing PMI has a long way to recover

The old continent still suffers from sluggish growth even if demand from China may eventually rise after the Sino-American trade accord.

Moreover, after President Donald Trump's focus on China fades, he may direct his ire in Europe. France's tech tax and the alleged benefits that German carmakers receive in the US may push the president to slap tariffs – easily wiping out any sprouts of recovery.

Several geopolitical issues remain on the agenda and also pose a risk: Iran, Russia, North Korea, and most recently the coronavirus are all risks to global trade that Germany and the euro area are all on the agenda.

If Lagarde sees the glass half empty and focuses on downside risks, the euro may suffer. And that could be her goal – keeping the value of common currency low helps push prices of imported prices higher. A lower exchange rate also makes exports more attractive.

Low probability: Despite ongoing concerns and loose monetary policy, the chances that the ECB emphasizes risks and ignores recent positive developments are low.

3) Hiding behind the review – EUR/USD mixed

December's only significant message – which did not move markets – was the announcement of the bank's strategic review. The ECB has kicked off the review this month and aims to conclude it by year-end. The slow-moving institution may change its goal, perhaps moving away from its inflation target of "2% or close to 2% inflation."

Will the bank raise the target, lower it, make only minor tweaks? It is probably too early to know. Moreover, Lagarde may hide behind the long exercise – or any interim conclusions – before setting a new direction for monetary policy.

In that case, the euro may trade choppily but refrain from choosing a new direction.

Medium probability. Lagarde may want to remain a "wise owl" as she put it rather than exposing a dovish or hawkish tendency. The ECB President would not be uncommon among her peers in central banking – they are all skillful in talking without saying anything meaningful.

Lagarde may focus on the green shoots in the economy, the EU's green deal and the US-Sino trade accord and paint a rosier picture, sending the euro higher. Waiting for the ECB's strategic review to convey a clear message also has significant chances, while emphasizing risks has and push the euro down has lower ones.