American consumers defied their own downbeat sentiments in August purchasing more cars, appliances and other durable goods than any month since May.

New Orders for consumer products designed to last at least three years rose 1.8% in August, reported  the Commerce Department on Monday. Analysts in the Reuters survey had predicted a 0.7% gain. July’s increase was revised up to 0.5% from flat.

Durable Goods Orders ex-Transport rose but 0.2%, less than half the 0.5% forecast.

Sales in the transportation sector, including automobiles, rose 5.5% in August and helped to boost the headline number.

Nondefense Capital Goods ex-Aircraft, also known as core capital goods, a widely tracked analog for business investment spending, climbed 0.5%, slightly ahead of the 0.4% estimate. The July result was revised higher to 0.3% from flat. 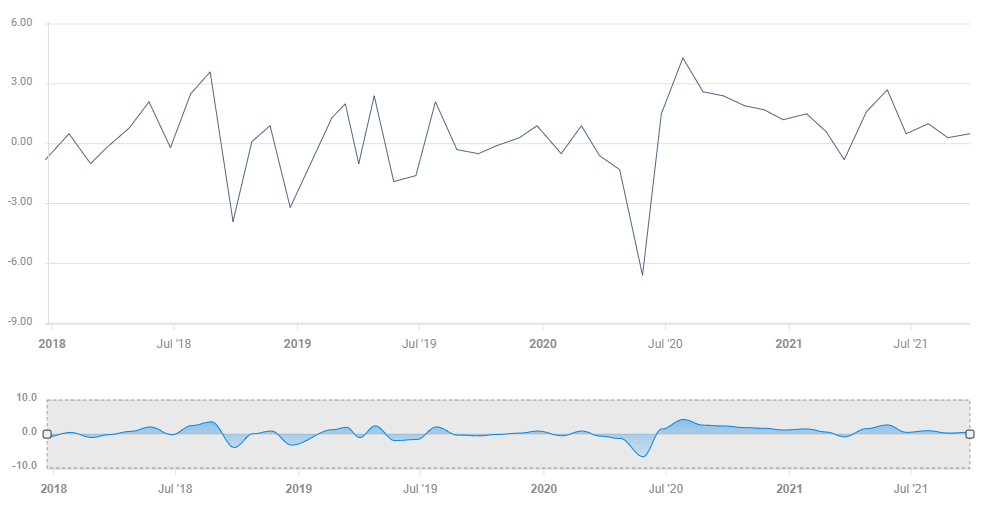 Business investment has been positive for 11 of the last 12 months and has averaged 1.06%  for the year.

These sales figures followed the pattern for Retail Sales for August reported on September 16 by the Census Bureau.

These August consumption figures were a surprise to the markets because consumer optimism had plunged in August.

The Michigan Consumer Sentiment Index fell 10.9 points to 70.3, for the largest single month decline in over a decade. It was the lowest score for consumer sentiment in 11 years and below the pandemic nadir of 71.8 in April 2020.

The Conference Board showed a similar collapse. Its Consumer Confidence Index dropped from 125.1 in July to 113.8 in August with the lowest reading since February 2020.

Historically, consumer outlook has been tied to consumption. Analysts expected Retail Sales to follow the sentiment figures lower, with as above, a drop of 0.8% in August.

Durable Goods, which had been subject to shortage induced demand were forecast to rise modestly.

The better-than-expected Durable Goods Orders had been telegraphed by the Retail Sales figures two week ago. Market response this time was positive though more circumspect.

The dollar was ahead against the euro and Japanese yen but slightly lower versus the sterling, aussie, kiwi and Canadian dollar.

The Durable Goods result will not fortify the Federal Reserve resolve in its pursuit of a bond program reduction. But it is a sign that consumers may be exaggerating their displeasure and remain a normal and reliable component of GDP.