Has pessimism about the US economy gone too far? That is the premise that will come to a test with the release of US Durable Goods Orders for July, the first significant US data point in a week. Economists' low expectations could also contribute to a positive surprise.

The previous significant economic release was July's Retail Sales and that 1.1% slide dampened the market mood and sent the safe-haven dollar higher as investors lowered their estimates for global growth. The one before – Consumer Sentiment for August – crashed below pre-pandemic levels, causing panic. Both contributed to lower expectations now.

Durable Goods represent products that last at least three years and serve as a reflection of investment. Markets tend to shrug off the volatile headline figure – which is forecast to drop by 0.3% after rising 0.9% in June – and focus on the Nondefense, ex-Aircraft gauge.

This "core of the core" measure fell is projected to have risen by 0.5% in July after advancing 0.7% in June. It fell short of estimates in the past two releases and five out of the first six months of 2021, also explaining why economists are more cautious now.

Overall, expectations are low, and perhaps for good reasons. Nevertheless, pessimism may have gone too far, especially as that downbeat consumer sentiment figure came in August. The Delta covid variant made its mark on the broader public only this month, while the mood was more upbeat in July – the month the data refers to.

The chart below shows that coronavirus deaths began picking up in earnest only in August, Mortalities make more impactful headlines than cases. 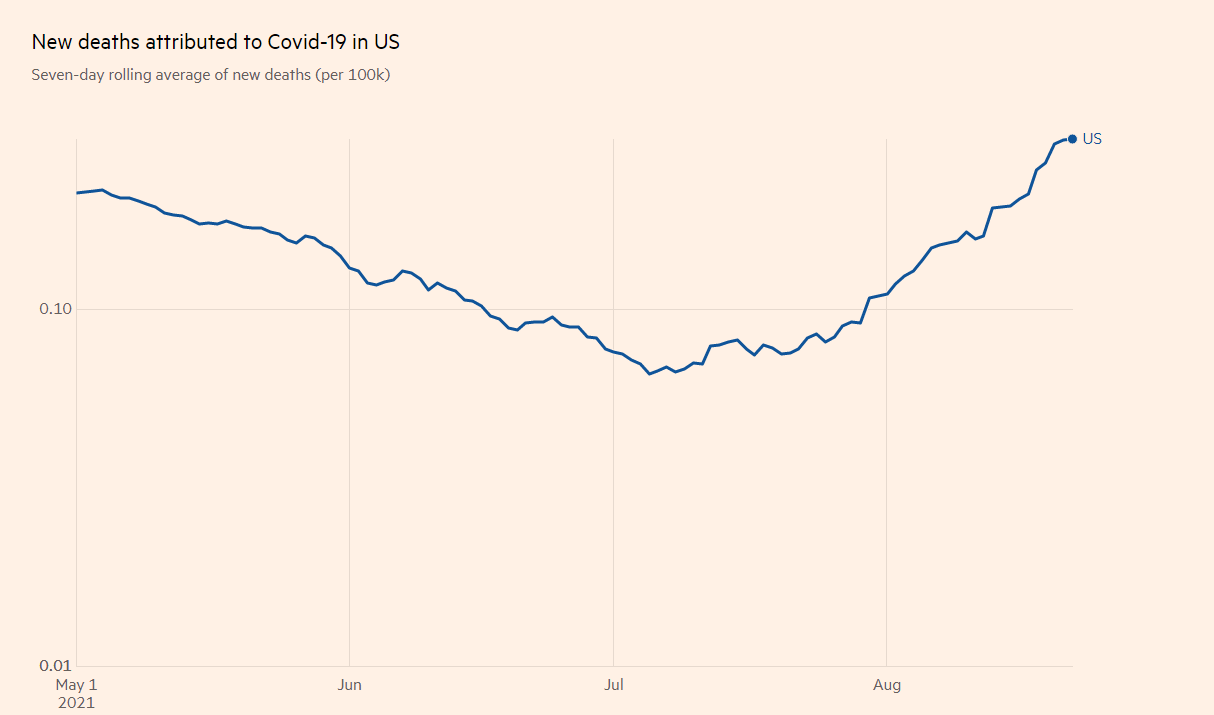 If the core figure beats estimates or even only matches them, it would serve as a sigh of relief for those worried about the economy and could support the dollar. The greenback has been on the back foot in recent days, and even a merely satisfactory number could trigger a reversal. Profits need to be taken.

In addition, the downfall of the dollar is primarily driven by hints from the Federal Reserve that it is set to refrain from signaling to taper off its bond-buying scheme. Uber-hawk Fed member Robert Kaplan said he is ready to reconsider his pro-tapering stance as the Delta covid variant spreads. Another clue is in the Fed's actions.

Tensions are rising toward the Fed's Jackson Hole Symposium and Chair Jerome Powell's speech there on Friday. The fact that the event will be held online – a last-minute change – is a sign the bank is worried about the virus not only for the broader economy but for its senior members as well. That programming note over the weekend contributed to a happy Monday in markets.

The bank currently purchases $120 billion per month and the current thinking is that this would last for longer. However, the Fed is also data-dependent and has several figures it is watching closely – one of them is this core Durables statistic, Investment has an impact on the medium-term. Any upbeat number could send shivers down investors' spines in fear the Fed would change its mind.

Overall, expectations for Durable Goods Orders are low, raising the chances of an upside surprise. The need to correct after several days of dollar falls and sensitivity ahead of Powell's speech implies the publication could serve as the trigger to scoop up the greenback.

When is Australia Retail Sales and how could it affect AUD/USD?

AUD/USD picks up bids to pare recent losses around the two-year low ahead of the key Aussie data. The reason could be linked to the light calendar and the traders’ preparations for the stated statistics.