Two and two are not adding up – softer U.S data is flying in the face of consumer sentiment, now at 17- and 11-year highs.

The retreat in the U.S auto sector report on Monday mirrors the lackluster broader consumer spending data released last Friday. Will the Fed shed some light on their fears in today’s March FOMC minutes? (2:00 pm EST). Investors want to know how much the Fed has discussed its balance sheet reductions.

For various reasons market moves have been rather limited for the start of this month, however there are many crowded trades across the various asset classes – FX, debt, equity, and commodity markets – whose unwinding will surely trigger sharp moves in financial markets.

In Europe, the results from France’s second Presidential television debate seem to have reduced the demand for safe-haven bonds.

With Easter break around the corner and the reduced hope of U.S Congress moving forward on economic policy, market risk attractiveness continues to decrease.

Global equities rose as Chinese shares soared the most since August, while other markets fluctuated before a meeting between the U.S and China leaders.

Returning after two-days of holidays, the Shanghai Composite (+1.5%) was the best performing index in Asia overnight. Reports of a new special economic zone in Xiongan helped lift local property and industrials names. The Hang Seng rose +0.2%.

Note: The rally comes even as the PBoC continues to pull liquidity out of the market with no reverse repo operations for an eight consecutive day.

In Japan, the Nikkei share average gained (+0.3%) as the yen (¥110.94) rally paused, although investors remain cautions ahead of the U.S/China summit. The broader Topix index ended flat, while Australia’s S&P/ASX 200 Index added +0.3%. 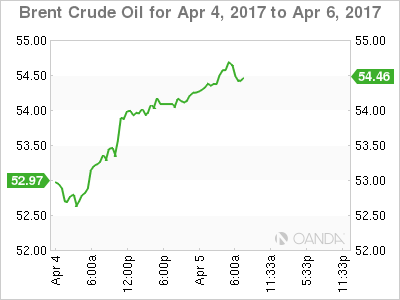 Ahead of the U.S open, oil has hit a one-month high near $55 a barrel as a drop in U.S. crude inventories Tuesday raised hopes that OPEC-led supply restraint is clearing a global glut. Also lending support is an outage at a U.K North Sea oilfield.

Both benchmarks have recovered from last week’s four-month lows on expectations that OPEC would manage to tighten supply by cutting production.

Nevertheless, global inventories remain stubbornly high and the market bears continue to bet that it will take months for oil prices to respond convincingly to lower OPEC output.

Gold prices are holding steady (+0.1% to +$1,256.38 per ounce) near one-month highs as appetite for riskier assets ease ahead of a meeting between U.S/China. Market focus is also turning towards the FOMC minutes; investors are looking for any clues on the pace of further U.S. interest rate rises. 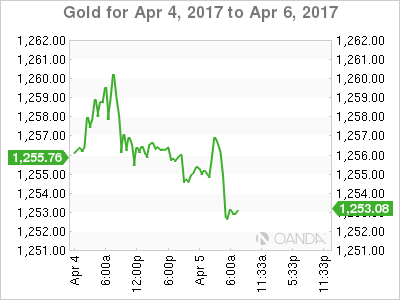 The demand for safer haven bonds has eased a tad overnight after a second televised debate of French presidential hopefuls. Early poll results suggest that Melenchon, Macron, Fillon and Le Pen showed the most convincing performance, but Mr. Macron seems to remain in front when it comes to voting preference. The 10-year German Bund yield is currently trading at +0.25%, unchanged from yesterday’s close.

Note: Bund yields have declined from highs of almost +0.5% in March to current levels. Aside from political concerns in France, investors are paring their fears of a rate rise by the ECB. 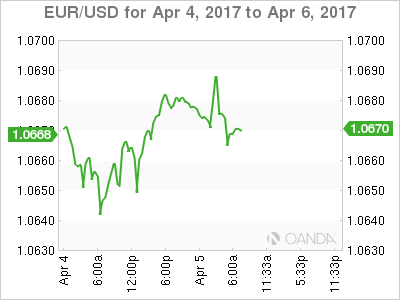 The FX market is retaining a cautious tone after North Korea fired a ballistic missile into the sea ahead of a two-day summit between U.S and Chinese leaders tomorrow.

The USD/JPY (¥110.94) is little changed ahead of the U.S open despite the traditional ‘safe-haven status’ of the yen in such a scenario. The U.K’s pound (£1,2475) has found some early traction after this morning’s U.K data for Mar. PMI services beat expectations (see below).

Elsewhere, the USD/ZAR ($13.8375) is +1.5% higher after reports that South African President Jacob Zuma again survived calls to resign by members of the ruling ANC. 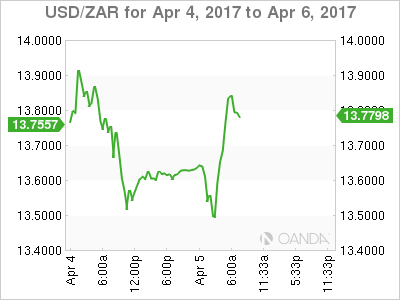 Major European PMI’s Services numbers remain in expansion, but most are succumbing to a slower pace – France and Eurozone are revised lower in their final readings, while the U.K handily beats expectations.

Despite hitting a 15-month high of 55.6 in March, Germany’s services PMI highlights rising cost pressure in the sector due to higher wages and fuel prices. Input price inflation hit “a near-six year high,” while output prices rise at the sharpest rate in three-years. The data underpin expectations of a pickup in economic growth during Q1.

In the U.K, the Services Sector was lifted by financial services. The headline print registered 55 in Mar., up from 53.3 in Feb. and the strongest reading in three-months. A weakened pound continues to aid exporters, however, quickening inflation is beginning to squeeze consumer-facing sectors. Businesses reported rising costs and tepid job growth. 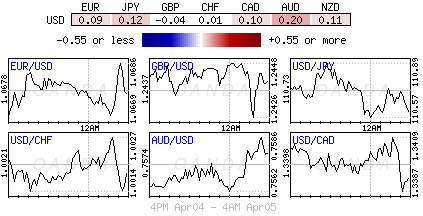 The Fed once again came to the rescue of the bulls, lifting gold price from around the key support around $1792 to take on the upside beyond the $1800 mark. So far this Thursday, gold price is extending the post-Fed rally towards the critical SMA200 one-day at $1821.