The Nikkei / JPY correlation breaks down during the epic 22% rally!

Over the last couple months as a Japanese investor, the moves have been nothing less of extraordinary. Since the end of August to a couple weeks ago, the rally of 22% was unprecedented as the market took cues from the other global equity markets hitting all-time highs in many cases (US, German, etc.) and the Japanese Nikkei was just following suit.
The issue currently, is that the Nikkei rally seemed to have stalled since over the last few sessions we have seen a strong pullback. Late last week the market put in a key reversal candle at the major 50% retracement of the all-time highs marked in the late 80’s to the lows in 2008(?). The market seems like we are backfilling some of the rally, but this has also had a consequence in the FX market which seems to be substantial.

For many years, the Nikkei and Japanese yen (JPY) has had a very strong correlation. As the Nikkei would go higher, investors would sell JPY to fund those domestic purchases, and visa versa. But what we have seen in the recent months is that correlation break stride. And this is a problem for the JPY vs most major currencies. See below: 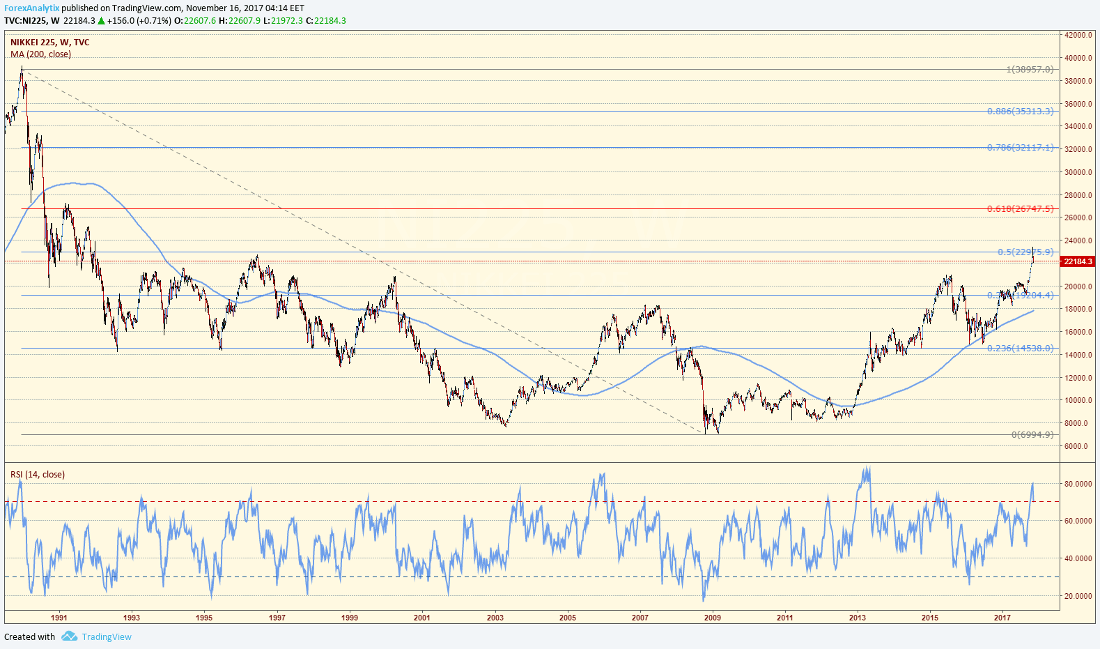 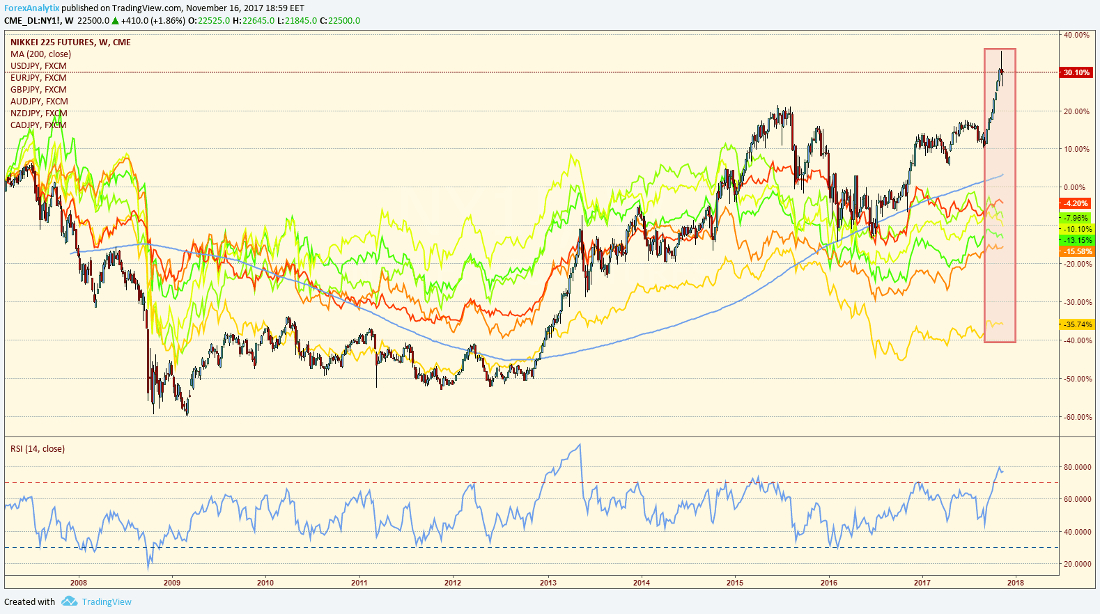 This poses a problem with FX traders, JPY dealers and institutions who thought this long time correlation would eventually lead to JPY weakness. What has happened in recent months, is the JPY has been quite range bound against many currencies. And if the Nikkei decides to make a more prominent pullback, we may see the JPY bounce higher and put the XXX/JPY pairs back down into their range or range lows. 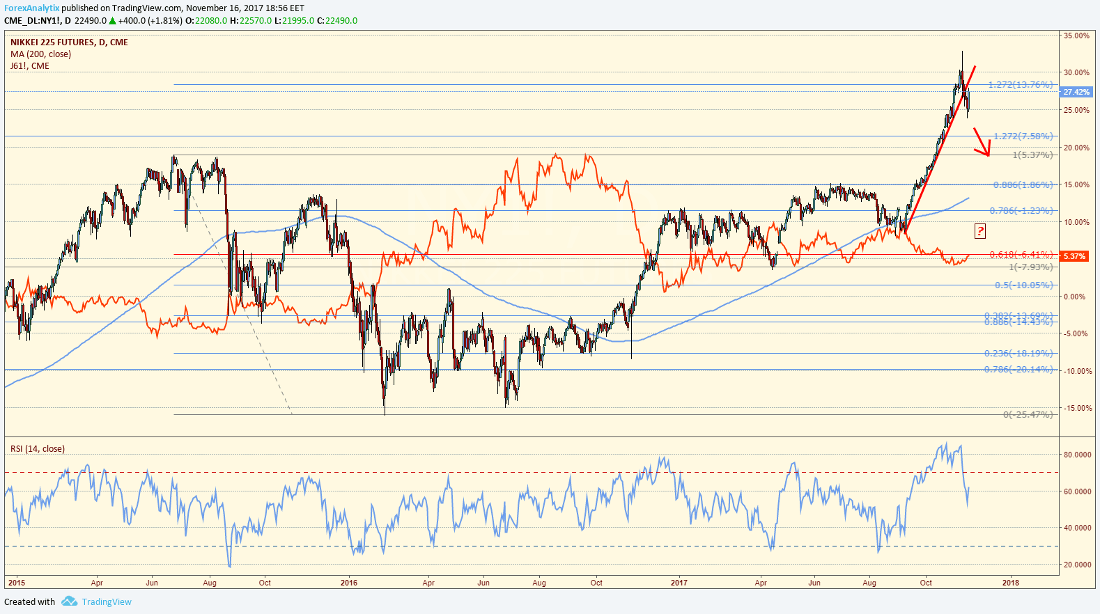 The JPY & Nikkei from an Elliott Waves Analysis Perspective:

A few weeks back we covered the USDJPY in another blog post and highlighted an Elliott Waves triangle pattern  on the weekly chart. We said that the upside can be limited at the 2015 trendline resistance since a triangle is a five-wave pattern in a contracting shape, so we were looking for a limited upside to complete wave D. Well, if you look closely we don’t have five legs yet within the red wave B), so I assume that wave E is still missing. It’s a final piece of the puzzle that can complete this complex correction, possibly by the start of 2018. Wave E will ideally target the lower side of the range near 110 which may also act as an important psychological level. 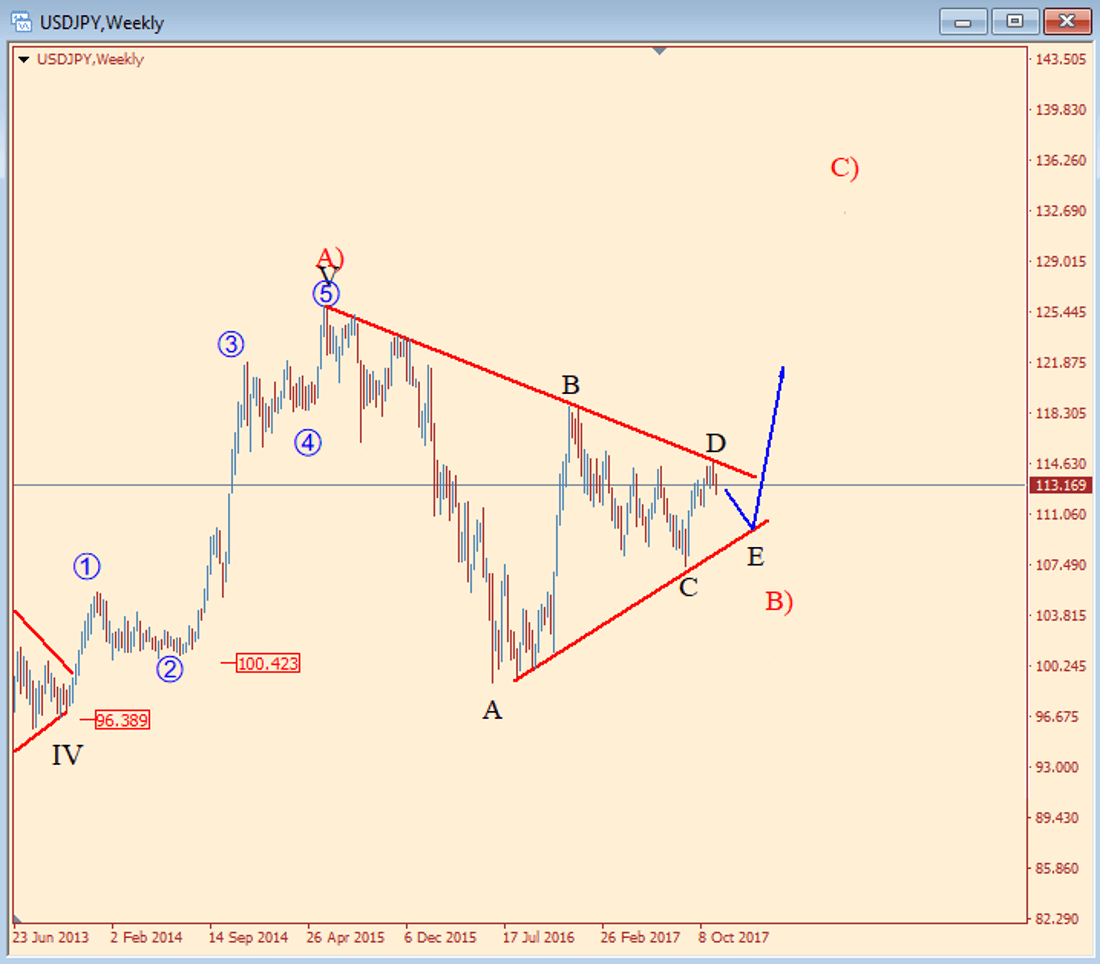 *A Triangle is a common 5-wave pattern labeled A-B-C-D-E that moves counter-trend and is corrective in nature. Triangles move within two channel lines drawn from waves A to C, and from waves B to D. A Triangle is either contracting or expanding depending on whether the channel lines are converging or expanding. Triangles are overlapping five wave affairs that subdivide 3-3-3-3-3.

When it comes to market analysis it is also important to keep an eye to correlated markets for increasing the probability of  success. This time we will look in NIKKEI index, which has been in a strong uptrend during the past two months. As we have seen time and time again nothing moves in straight line, so we knew that sooner or later correction would manifest (in fact it has already started). Well, if you look at a NIKKEI weekly chart we see five waves up within wave III, so a corrective wave IV is expected, ideally back to the 38.2% Fib. compared to wave three, which comes in around 20300-20900, a level at which we also find the previous swing highs. That can prove to be an ideal area for a bounce (if we get there). At that time we should expect USDJPY to bottom, ending wave E within the aforementioned triangle. 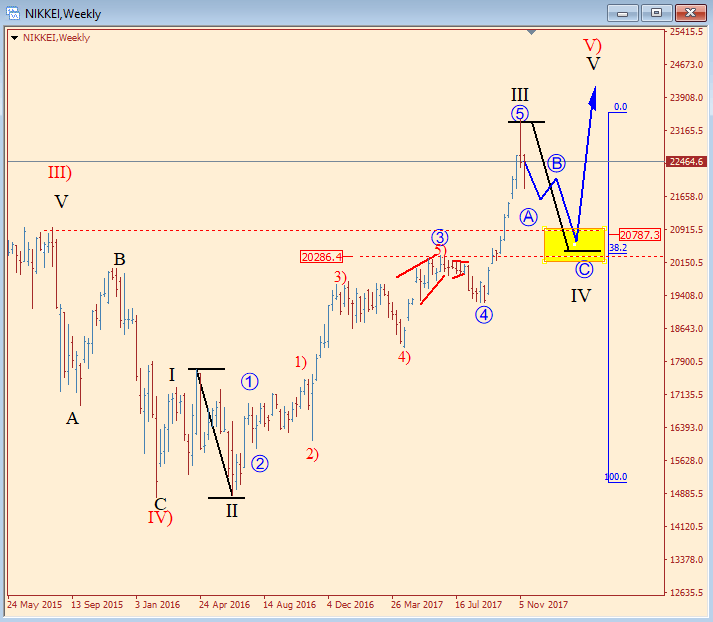