The past week has been relatively interesting on the Crude Oil news front as OPEC quietly released their `’World Oil Outlook’ report. As usual, the cartel largely shrugged off the growing risk around the arrival of peak oil demand and largely painted a picture of improving price stability. However, what was particularly illuminating is the fact that the cartel drastically revised upward their assessment of U.S. shale oil production. Subsequently, the question remains if OPEC is finally ready to admit defeat in their strategy to crush shale oil producers.

Surprisingly, it was only just last year that OPEC was pushing the narrative that shale oil production would be damaged by their strategy of flooding the markets with cheap oil. In fact, the cartel was almost smug in their view that shale production would continue to fall and by 2021 represent only 4.8 mb/d. 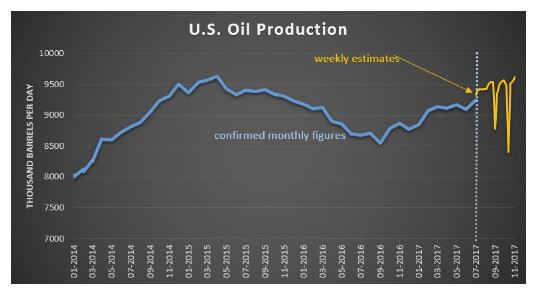 However, clearly this hasn’t happened and new technology in shale production centres has increased productivity and the marginal cost of extraction for U.S. producers. Subsequently, even OPEC has now suggested in their latest modelling that they see shale output rising to around 7.5 mb/d by 2021. This is a whopping near 50% upward revision of shale output and quietly suggests that the cartel is finally abandoning the notion that they can drive U.S. shale producers out by flooding the market with supply.

Subsequently, the likelihood of OPEC extending their production caps well into next year is relatively strong but it remains to be seen if it will actually be effective in establishing higher oil prices. In fact, some interesting tidbits of intelligence released over the past week seem to suggest that not all is well in the land of Middle Eastern oil producers. 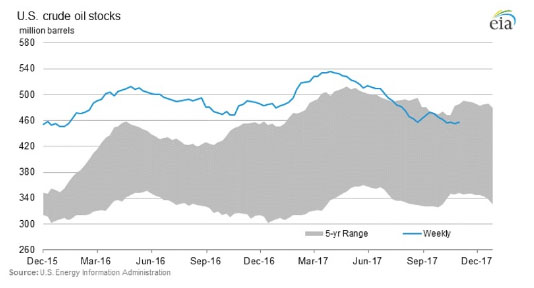 Last week also saw the FT reporting that satellite imagery showed the offloading of one of the largest tankers in the world, a ULCC that has been stationary off Oman since 2015. The crude was apparently being stored afloat for prices to increase to an advantageous level before being sold into the market. Subsequently, this may be an interesting sign that some of the biggest players in crude markets are looking at the present market and seeing prices forming a top.

In addition, the satellite imagery also shows a major oil storage facility in Saudi Arabia may actually have greater inventory than first thought (or reported). In a case of, a picture never lies, it would seem apparent that crude stocks have actually been rising at the facility in contrast to the official reports of a fall in inventories by over 70 million barrels since 2016. Subsequently, there is plenty of scope to disbelieve the Kingdom when it comes to both their production and storage figures.

Ultimately, the current drive in prices is largely being fuelled by rising geopolitical risk within the House of Saud. Clearly, the purge that has gone on recently has seen prices spike due to many of the people that were considered as impediments to extending production caps having been removed from their respective positions. These actions have seen plenty of speculation of WTI prices trading north of the $60.00 handle. However, it may really just be a case of the ‘emperor has no clothes’ as OPEC quietly admits that their strategy to crush shale oil has proved to be an unmitigated disaster. Subsequently, watch for a correction in crude prices over the next month as the market returns to the reality that is the ongoing rebalancing within crude oil markets.