The DAX index has posted sharp losses in the Wednesday session. Currently, the DAX is trading at 12,335 points, down -1.70% on the day. On the release front, there are no German or eurozone events. On Thursday, the ECB releases a rate statement.

European stock markets have taken a thrashing on Wednesday, with the DAX falling close to 2 percent. On the DAX, banking stocks are sharply lower. Commerzbank has fallen 2.80% while Deutsche Bank has plunged 3.27%. The sharp losses reflect investor concerns over rising US bond yields, which have climbed to 4-year highs. On Wednesday, 10-year US Treasury notes have risen to 3.015%, and 2-year bonds have increased to 2.504 percent. With inflation appearing to be on the rise, there are stronger expectations that the Federal Reserve will raise rates four times in 2018, which is good news for bond yields and conversely, weighing on equities.

All eyes are on the ECB, which will release a rate statement, followed by a press conference with ECB President Mario Draghi. Eurozone indicators have softened in recent weeks, raising concerns that Draghi could sound dovish about the eurozone economy. At the March meeting, policymakers took a small step, dropping a pledge to increase stimulus if needed. Will we see additional ‘baby’ steps at the April meeting? The ECB has said it intends to continue bond purchases until at least September, to keep interest rates at current levels until “well past” the end of the program. Traders shouldn’t expect any dramatic moves at the policy meeting, as the bank will likely continue to preach patience and prudence. However, a dovish message from Draghi could weigh on the European stock markets. 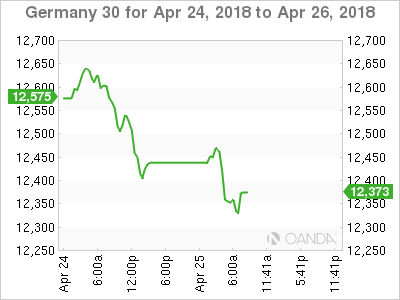