As mentioned yesterday, while there are some key risks facing equity market investors, the major stock indices continue to exhibit bullish characteristics for the time being, suggesting more short-term gains could be on the cards. Indeed, despite a flat end to the day on Wall Street yesterday, Asian markets closed higher overnight while European markets have started the last day of the week on the front foot. Will the positivity carry on when the US markets open?

Above all, it is hopes over an imminent trade deal between the US and China which continues to support the markets. Apparently, “substantive progress” has been made on trade talks, according to Chinese state media – even if a planned summit between Presidents Trump and Xi has already been pushed back into April. In addition to this, you have renewed dovishness from major central banks, with the Bank of Japan overnight deciding, as expected, to keep its policy unchanged. As a result of the recent central banks’ actions, government bond yields across the developed economies have fallen, boosting the appeal of the higher-yielding equity markets. But it remains to be seen for how much longer the rally will continue.

Despite the sharp gains for the US and China, European markets are lagging behind although they too are on the rise. Here, investors are not as jubilant in part because of ongoing Brexit concerns and weak economic performances across the Eurozone. As well as exports being hit by falling Chinese demand, the recent emerging market currency crisis in places like Turkey has also weighed on growth. But with the ECB introducing new long term loans for banks and pushing back its rate hike expectations, investors have been warning towards European equities. So, if sentiment towards global stocks remains positive, European markets could catch up with Wall Street over the coming weeks.

One of our favourite and most traded European stock indices is the German DAX. Thanks to the above fundamental reasons, the technical outlook on this index currently looks promising for the bulls. Here are some key technical considerations:

So, overall, the technical outlook on the DAX appears to favour the bulls in the short-term outlook, even if the longer-term outlook is not too rosy. A break above the 11675-11700 resistance area could therefore be on the cards, which, if seen, could help accelerate the pace of the bullish momentum as in the index moves towards the upper end of its bullish channel. However, a potential break below the recent lows around 11400 would be a bearish development. 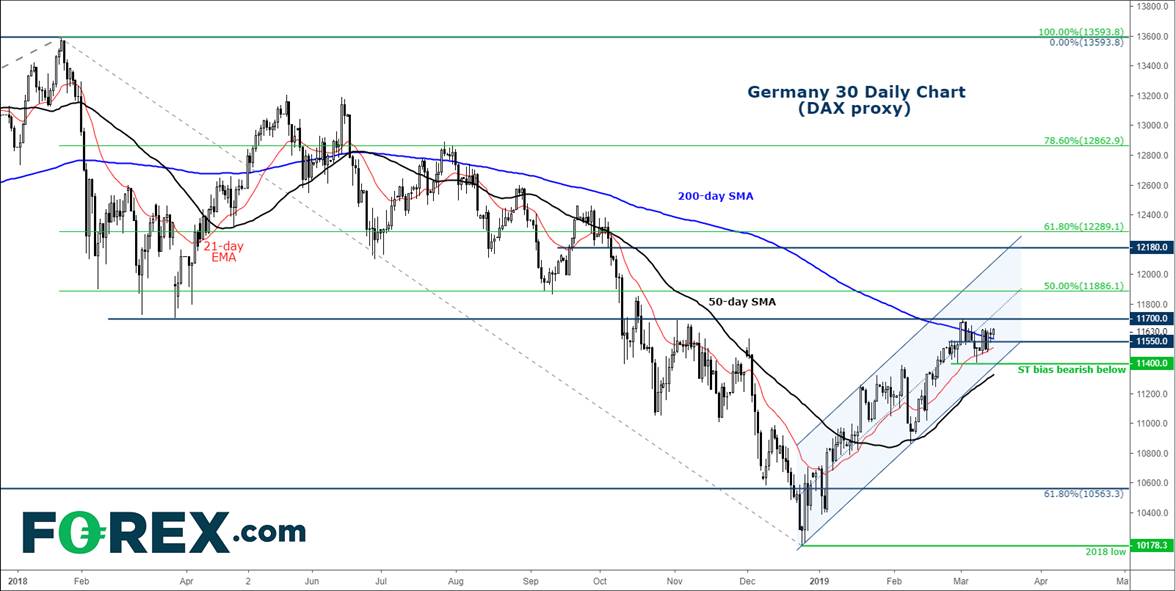 Source: TradingView and FOREX.com. Please note, this product is not available to US clients

EUR/USD's daily chart shows a sideways channel pattern. A key oscillator indicates the pair could revisit the channel support. A range breakdown could cause more sellers to join the market and shift risk in favor of a re-test and possibly a break below the 2020 low of 1.0636 reached on March 23.