What do the portents say? Well, we’ve been looking for connections between gold and bitcoin, and we see a chance to fatten the coffers. Read on.

But first, let’s talk about gold and the miners. Yesterday’s session provided us with a perfect confirmation of the bearish case in the precious metals sector for the short term.

The reason is that what happened was bearish in two ways:

1. Nothing happened in gold.

First, the decline in mining stocks. A price action following a confirmed breakdown was exactly what I expected to happen to both junior miners and senior miners. 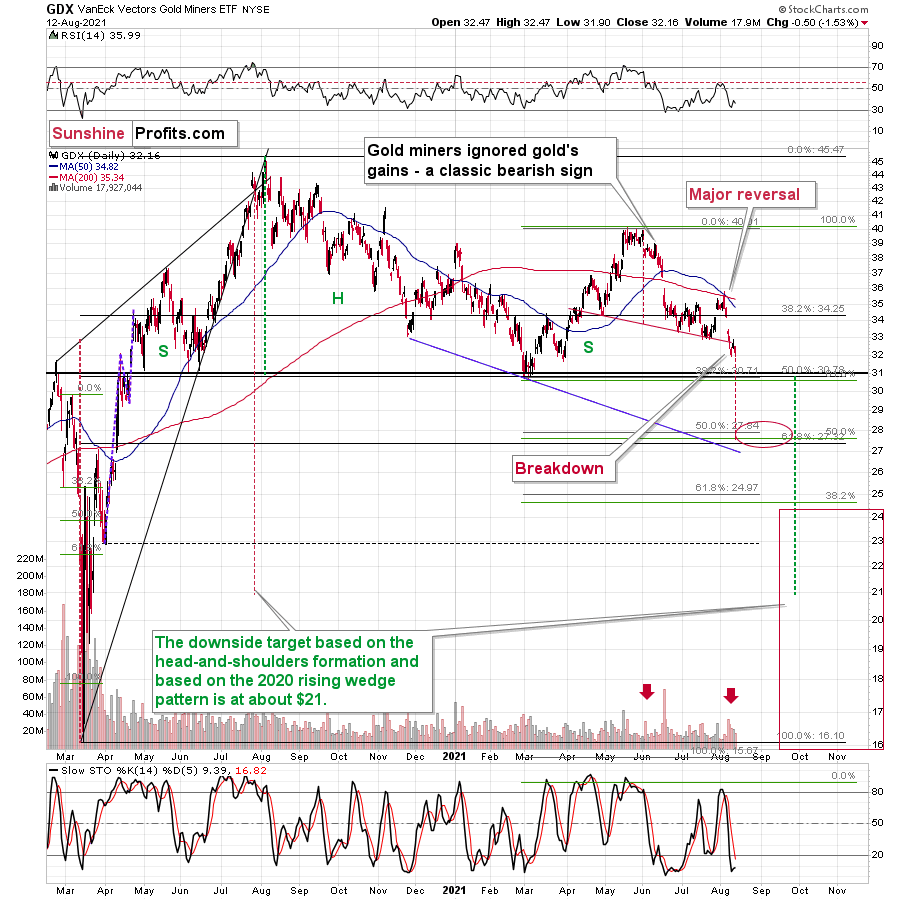 Senior miners – the GDX ETF – declined after verifying the breakdown below the neck level of the head and shoulders pattern. 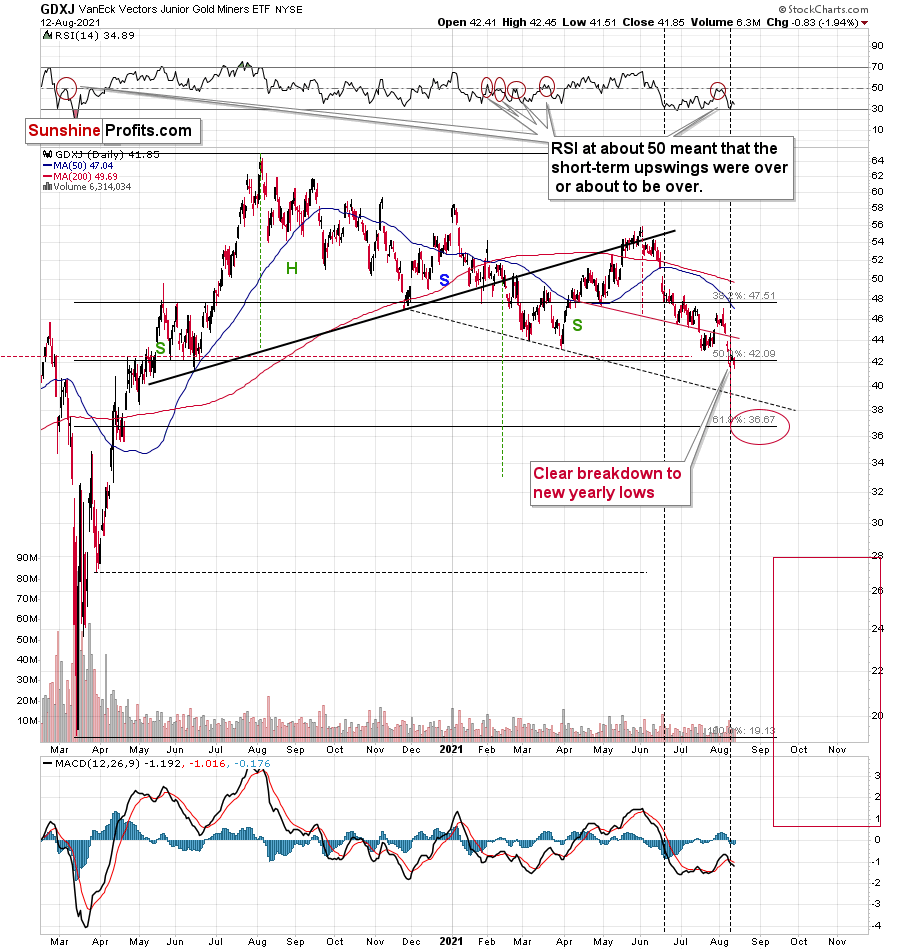 Both are very bearish on their own as the confirmed breakdowns imply that another – bigger – short-term slide is about to start.

But they are even more bearish when compared to what happened in gold. 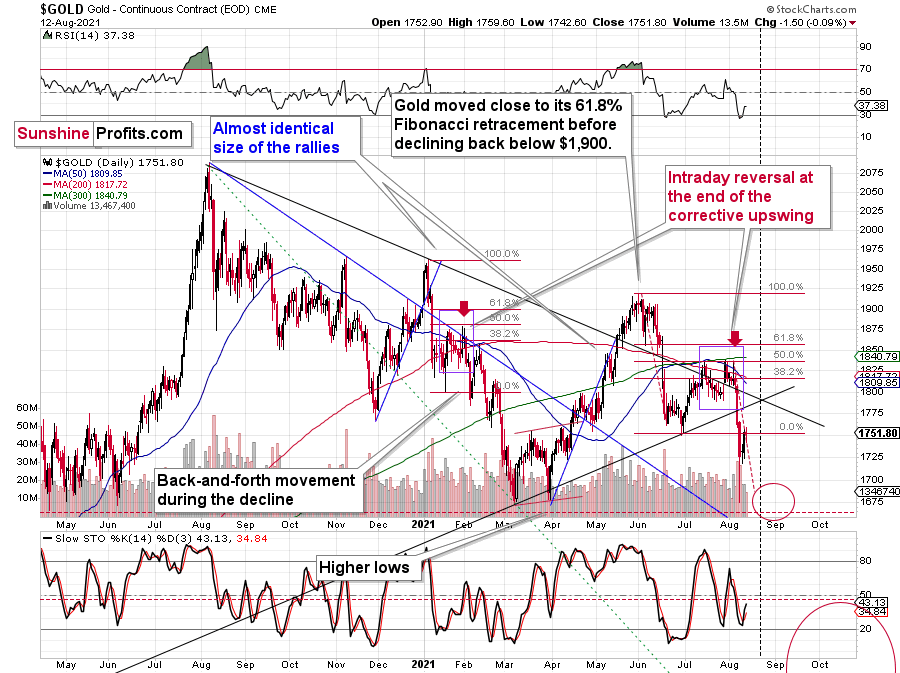 Nothing happened in the case of the gold price, which means that miners had no good reason to decline yesterday. Well, except for the reason that they have been in a medium-term downtrend and due to myriads of technical reasons that I discussed previously. However, on a day-to-day basis, since gold didn’t move, miners shouldn’t have moved either, if their outlook was at least neutral.

Their outlook, however, is not neutral. It’s clearly bearish as they showed weakness relative to gold. What just happened is the exact opposite of what one should see at or after an important bottom – at that time gold stocks should outperform gold.

Consequently, the precious metals sector is likely to slide shortly, and profits from our short positions in the junior miners are likely to increase sooner rather than later.

That’s as far as the short-term implications are concerned.

Gold and Bitcoin: What’s in It for me?

There is something else that I’d like to share with you today, though. I previously wrote that there’s a tendency for gold and bitcoin to move in the opposite directions in the short run, despite that they both moved higher in the long term – since 2014. I wrote that I’ll get back to this topic at some later date – and that day is today. 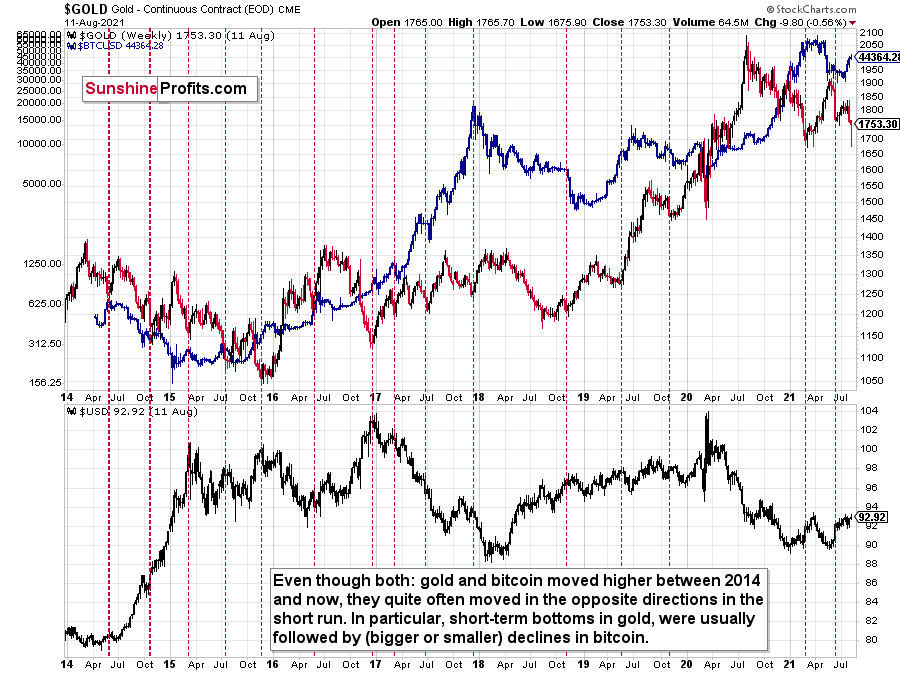 At first glance, the performance of gold and bitcoin doesn’t seem to be that connected, besides the fact that they both moved higher in recent years. However, taking a closer look reveals that the link between them is not only present, but it’s actually quite strong.

I marked the first two (2014) cases with bold lines as that’s when the USD Index had been rallying particularly strongly. Since it seems that the USDX is starting a sizable upswing, these analogies might be most important.

Bitcoin declined in 2014 and the decline took the form of two smaller declines. One of them started close to the middle of the year (practically right at the vertical line) and the second started in the final few months of the year. What is most interesting, is that both bitcoin declines started when gold was forming short-term bottoms.

Bitcoin has been on the rise in the last several days, and given what we saw in gold – and in light of the above-discussed link – it’s perfectly normal, since gold has been declining (the recent pause seems too small to trigger any price moves). But most importantly, it tells us that when gold rebounds, it could be bitcoin’s chance to slide.

The 2014 decline might not seem like a big deal on the above chart, but that is only due to the perspective. When you look at the prices (the axis on the left side of the chart), you’ll see that bitcoin actually declined from about $600 to about $150. In other words, its price was reduced fourfold. That’s a huge decline. And a huge opportunity for those who are able to see it in advance.

This might or might not provide us with a great shorting opportunity in case of bitcoin, when gold rebounds (likely close to the previous 2021 lows), increasing this year’s profits, but it’s too early to say so with certainty at this time. I’ll keep looking for confirmations and I’ll report accordingly.